The Cold War is over. 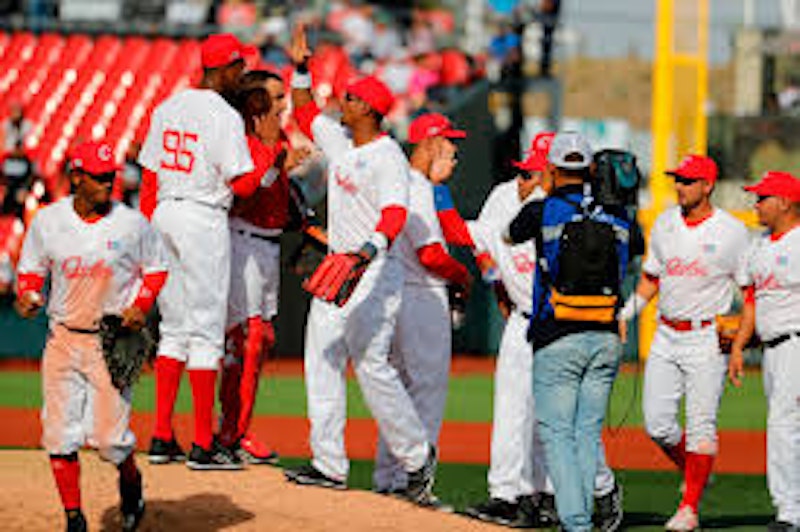 Major League Baseball and the Cuban Baseball Federation had a deal in place to ease the process of signing Cuban players, but then the Trump administration stepped in.

Back in December, MLB, its players association and the CBF reached a mutually-beneficial agreement. The deal, which was slated to run through 2021, would’ve allowed Cuban players who are 25 and older and who had at least six years of experience in the Federation to sign with MLB teams lawfully in their native countries. They would’ve been treated like other international free agents—similar to the deals MLB has with the Nippon Professional Baseball League, Korean Baseball Organization and Chinese Professional Organization. The teams grant a player their release in exchange for a posting fee from the MLB team who signs the player (normally worth 15 to 20 percent of the player's contract).

However, this will not happen—at least under the current administration. Instead of easing the embargo against the Cuban government, as 58 percent of Americans support, according to a 2016 CBS/New York Times poll, they’ve mistakenly embraced the Cold War mentality.

"The U.S. does not support actions that would institutionalize a system by which a Cuban government entity garnishes the wages of hard-working athletes who simply seek to live and compete in a free society," National Security Council spokesman Garrett Marquis said in a statement on Monday. "The Administration looks forward to working with MLB to identify ways for Cuban players to have the individual freedom to benefit from their talents, and not as property of the Cuban State."

The administration's actions here are counterproductive for a few reasons. The current system makes it unlawful for Cubans to defect from their country and if they do, they’re never welcomed back home. This has deterred players on their national team from leaving the country for a baseball career where they could earn millions. Just last year, their national team's shortstop Yorbis Borroto told The Guardian “Playing in the MLB is the dream, but we want to play legally.”

By not involving the Cuban government here, players must be smuggled out of their country by human traffickers. This puts them in dangerous situations where they can be held hostage, blackmailed for a large percentage of their salary or signing bonus. Notably, Cleveland Indians outfielder Leonys Martin found himself held at gunpoint by smugglers who wanted 30 percent of his first MLB contract while retired MLB infielder Yunel Escobar's traffickers demanded a $150,000 ransom for his release. ESPN's Jeff Passan said these accounts along with the experiences of Cincinnati Reds outfielder Yasiel Puig, Chicago White Sox first baseman Jose Abreu and New York Mets outfielder Yoenis Cespedes were presented to the Trump administration, but didn’t influence their decision.

It’s unfortunate that MLB won't have the best competition possible due to regulation from the federal government. Talent-wise, Cuba’s among the best baseball countries in the world, but it's a market to which MLB's access is restricted. It has produced some elite MLB talent in recent years like Abreu, a perennial 30-home run hitter, Cespedes, who bashed 35 homers in 2015, and New York Yankees closer Aroldis Chapman, whose fastball once topped out at 105 mph. However, since their national team played a competitive exhibition game against the Tampa Bay Rays in 2016 where they lost 4-1 (and the Rays fielded an actual MLB team), it’s fair to say there are player staying home who could help out MLB clubs. There might be the occasional Rusney Castillo, Yasmany Tomas or Juan Carlos Linares signing mixed in that doesn't work out, but that doesn't erase the nation's three Olympic gold medals in the sport.

There’s also the hypocrisy when it comes to the United States' refusal to do business with Cuba. It’s true it’s a socialist country and they support the Maduro regime in Venezuela, but it's not 1962. Cuba isn't that relevant on the world stage and despite being about 50 miles from Florida, they haven’t bothered the US directly in a long time.

On the other hand, the US has no issue conducting business with two of its biggest geopolitical foes: Russia and China. The American government will gladly allow consumers to purchase goods made in Chinese sweatshops, accruing tax revenue for the Chinese government. Indirectly, this supports China's nuclear program, IP theft, and human rights abuses.

The US imports crab and vodka from Russia, support the military of a country that annexed Crimea, kills and detains gays in Chechnya and attempts to use social media to create a divide in the US. And both of those countries spy on the US.

Is there a perfect solution when it comes to MLB dealing with the CBF? No. The Cuban government bears most of the responsibility for its socialist nationalization of baseball and supporting a Venezuelan government. However, it would be good if the Trump administration held a consistent standard on which countries to conduct business with. For now, Cuban baseball players will be stuck in the same old dangerous situation--and MLB won’t see the uptick in talent.