Guilt-ridden sharpshooter unsuccessfully tries to explain race in the NBA and society. 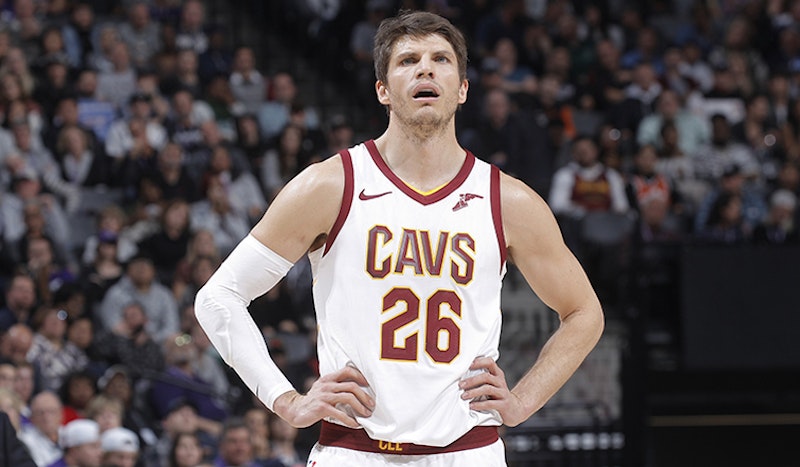 Kyle Korver of the Utah Jazz, who's white, begins his recent much-talked-about piece, “Privileged,” on The Players’ Tribune with an anecdote about brutal NYPD officers breaking the leg of one of his teammates, Thabo Sefolosha, while arresting him in 2015. Korver explains that he feels guilty that the first thought he had upon hearing the news was questioning why Sefolosha was out on the town the night before a game.

That's a legitimate piece of self-criticism when you're talking about a season-ending injury to your closest friend on the team, but Korver wants us to believe that his lack of empathy was due to Sefolosha's race—he's black—but it’s not convincing. If Korver believes that players partying the night before games is detrimental to the team, then why wouldn't he have had the exact same thought about a white, Asian, or Hispanic teammate who'd been out late?

Korver was congratulated for his “courageous,” soul-searching mea culpa, but the rookie polemicist is unable to make even one coherent point, which didn’t prevent receiving thousands of Twitter retweets. After discussing the Sefolosha affair, Korver moves on to another incident that made him think harder about the race issue. When NBA star Russell Westbrook and the Oklahoma Thunder visited Salt Lake City in March, the fiery guard got into it with a heckling fan, which Korver explains as, “ What actually happened was that a fan had said some really ugly things at close range to Russ. Russ had then responded. After the game, he’d said he felt the comments were racially charged.”

In the post-game press conference, Westbrook explained that the fan told him, “Get down on your knees like you're used to,” which he took as a racial slur. What's the racial component of that insult? That's obviously a homophobic put-down, which Westbrook (and Korver) has to know, to which he responded by saying he was going to “fuck up” both the heckler and his wife. Perhaps “Russ” was aware that he'd crossed the line by saying that to a woman and decided that making the man out to be a racist was his best bet to cover himself. No objective observer would buy it.

Korver hints why he's become so introspective in his very first sentence when he writes about waking up a little. The three-point specialist's been in an ignorant stupor for years, but he's seen the light now and he's “woke.” Behold the millionaire white savior!

It’s the latest way for the privileged to deal with their guilt, but if Korver wants to make the point that he's got it easier than the black players in the league, he could’ve found an example that didn't involve a player upset about being called a homosexual making a physical threat against a female fan. “This wasn’t only about Russ and some heckler,” writes Korver. “It was about more than that. It was about racism in America.” Even if the fan had made a racist comment, how would that represent racism in America?

People like Korver who consider themselves woke are active on Twitter, and they never tire of talking about “privilege.” Another sign that Korver’s gone all-in with intersectionality is that he mentions being an ally to people of color. Whereas being an ally as a white person once meant going to Alabama to march against segregated lunch counters, it's now about “listening” to those from “marginalized communities,” and writing a meandering article that accomplishes nothing but self-aggrandizement.

The basketball player writes about an “elephant in the room” that's on his mind: “It’s the fact that, demographically… I have more in common with the fans in the crowd at your average NBA game than I have with the players on the court.” He laments that his demographics give him privilege, but demographics includes socioeconomic characteristics such as age, sex, education level, income level, marital status, occupation, and religion. Demographically, Kyle Korver’s pretty similar to his fellow NBA players. But his new, woke thinking has him convinced that people are only defined by their race. It's unfortunate that NBA players sometimes have to deal with racist individuals, just as it's unfortunate to be a child in West Virginia brought up by opioid addicts.

Korver writes, “I have to listen, I'll say it again because it's that important. I have to listen.” Then: “I have to support leaders who see racial justice as fundamental—as something that's at the heart of nearly every major issue in our country today.”

So he has to listen to charlatans like Al Sharpton and we should too if we want to be woke? I'll pass. Kyle Korver sounds like a college freshman who’s home on spring break and can't stop talking about Ayn Rand because he just read The Fountainhead and it rocked his world.