A few predictions for Opening Day. 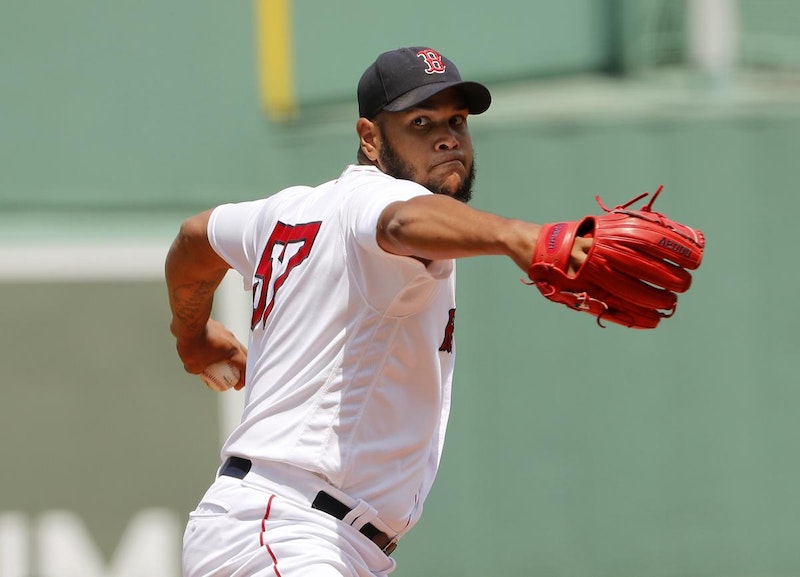 AL East: The Tampa Bay Rays will use every pitcher on their active roster in 100 of their 162 games. The commissioner's office will make a new rule at the All-Star Break that every pitcher entering in the middle of an inning must sprint from the bullpen and is allowed just one warm-up toss. Brandon Lowe, the newly-extended Rays second-baseman, will hit 30 homers while new arrivals Charlie Morton and Tyler Glasnow will combine to start 65 games, throw 350 innings, each ending the year with an ERA under 3.30.

Eduardo Rodriguez will pitch the most innings for the Red Sox, while Chris Sale gets extra cautionary rest midseason and Nathan Eovaldi is used as a three-inning reliever twice a week from August on. Meanwhile, the Sox lineup: Dustin Pedroia will hit .320 in 320 plate appearances, Jackie Bradley will knock in 108 runs and Rafael Devers will hit 29 homers. Mookie Betts will come very close to reproducing his MVP campaign, setting up another record-setting, one-year arbitration deal and causing panic over his 2020 free agency. The Yankees will hit 290 long balls, breaking the record they set last year, but they'll lose to Boston in a one-game playoff for the AL East crown. Blue Jays phenom Vlad Guerrero Jr will finish with a .900 OPS but Toronto's winning percentage will be .400.

AL Central: Cleveland’s Carlos Carrasco will win the AL Cy Young thanks to the abysmal lineups of the Royals, Tigers and White Sox. Corey Kluber and Trevor Bauer will both finish in the Top 6 in the vote. Brad Hand will lead the AL in saves. The Twins will come close to winning the second wild card spot but fall a game or two short. Resurgent seasons from Byron Buxton, Miguel Sano, Jonathan Schoop and Michael Pineda will make baseball fun again in the Twin Cities. The Twins will bolster their pitching before the trade deadline. The White Sox have reasons for optimism, but the pitching, other than Reynaldo Lopez, isn’t close to ready yet. Eloy Ahoy Jimenez destroys baseballs and easily claims AL Rookie of the Year honors while Yoan Moncada continues to run hot and cold for the White Sox.

AL West: The Astros will win 107 games with their loaded lineup while Justin Verlander and Gerrit Cole vie for the ERA title. Carlos Correa and Jose Altuve will both return to peak form. New addition Michael Brantley, who finished third in the MVP voting in 2014 but has been derailed by injuries since, will have a career year, slashing .330/.415/.575.

The Angels will overtake the A's. Neither have enough healthy starting pitching to dominate. First-baseman/lumberjack Justin Bour will help lead the Trout-Ohtani-Upton Angels to a fierce wild-card finish with the A's, Twins, and Rays. Ohtani Fever will crest in Game 162 with a walk-off in Anaheim to clinch the second wild card spot. Dee Gordon will steal 69 bases, also the number of Mariners wins, four more than the Rangers.

NL East: Bryce Harper will bat under .230 but hit 50 homers and the Phillies win the division thanks to J.T. Realmuto and Andrew McCutchen, and the dominance of Aaron Nola and Nick Pivetta on the mound. Nola will win the NL Cy Young. The Nationals outfield will be fun early on with electrifying rookie Victor Robles, who will swipe 40 bases and Juan Soto, who will continue to terrify NL pitchers. Washington will fade late due to injury-plagued veterans Ryan Zimmerman, Howie Kendrick and Adam Eaton, regression from the kids and the fact that the NL East is as deep as its been in years.

Atlanta will wait and wait for its starters to get healthy, but the arm troubles of Mike Foltynewicz and Kevin Gausman will force them to rely heavily on the youth brigade of Kyle Wright, Bryce Wilson, Max Fried and Touki Toussaint. Touki will have the best year and the best name, but the Braves, like the Nats, will fade in September. Mets fans will be delighted by the power of first-baseman Pete Alonso and the arm of Jacob deGrom, but not by another mediocre season and fourth place finish. The Marlins will be terrible, but Pablo Lopez will turn heads with 150 innings of 2.80 ERA and 1.10 WHIP. Trevor Richards will strike out 200 batters but remain homer-prone.

NL Central: The Central will be a bloodbath from Opening Day to season's end, with the Cubs edging out the Cardinals and Brewers by a game or two. Those two will win both NL wild-card spots.

For Chicago, Yu Darvish will have a 290-strikeout season, winning 21 games. The culmination of his redemptive year will come in October. Kris Bryant will annihilate NL pitching, slashing .320/.430/.610, but narrowly lose the MVP race to Paul Goldschmidt, who’ll mash homers (52) in the hitter-friendly NL Central ballparks. Milwaukee will enjoy early-season success thanks to a deep lineup and the infusion of young arms in Corbin Burnes and Brandon Woodruff. Spike Vrusho’s beloved Pirates will show glimpses of promise, but end up at exactly .500, the only team with 81 wins this year. The Cincinnati Reds will finish with the worst ERA in the majors.

NL West: The Dodgers will win 105 games, clinching the division in early September as the Rockies pitching depth finally caves in beyond German Marquez and Kyle Freeland. Oft-forgotten Ross Stripling will lead the Dodgers’ many starters in ERA and WHIP. Manny Machado will only sort of bolster the Padres lineup. They'll win a mere 77 games, though they’ll contend for a wild-card spot in 2020 and beyond. Madison Bumgarner will be traded to the Twins at the deadline, as the Giants pack it in. The Twins will reluctantly part with a future ace whose real name is Brusdar Graterol, but will eventually be called "Be-Grate."