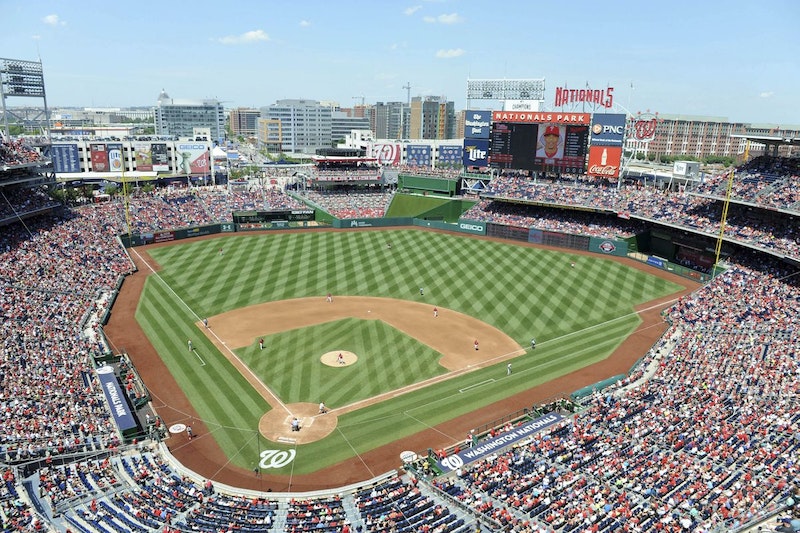 This baseball story begins in front of the painting of abolitionist John Brown hanging in the National Portrait Gallery in Washington D.C. The Torrington, Conn. native is depicted by Norwegian painter Ole Peter Hansen Balling with his blue eyes slightly crossed and gazing upward. Brown appears slightly whacked-out, and the exhibition label reads, “People noted a touch of insanity” when encountering Brown. Looking around the gallery, especially the Civil War section, I realized Brown and his famous five-inch bushy beard dangling from his jaw were not alone. Many bearded men were depicted. I grew up in an Amish territory of central Ohio, so I’m accustomed to statement beards of great import. Full disclosure: I have a goatee which I’ve worn since the 1994 baseball strike, inspired by the facial hair of White Sox hurler “Black” Jack McDowell. Additional disclosure: my father-in-law Paul Johnson, the British historian and long-time columnist, once wrote an article denouncing all people with beards.

Which brings us to sometimes-third baseman Colin Moran of the Pittsburgh Pirates. I was about to take a taxi from the Portrait Gallery to Nationals Park in the Navy Yard section of D.C. for my first Pirates road game of the season. I’d done Philadelphia before and of course Queens dozens of times but never D.C. I’m not a big fan of the “bucket list” trope, but crossing MLB ballparks off the list is kind of fun and something that’s usually noted in my household. The now-ubiquitous long beards arrived in MLB a few seasons ago and many fans, especially females, called for their immediate ouster via the blade. Sure, kooky closers are expected to emerge from their bullpen enclaves with all manner of facial hair hijinx. But solid position players such as your Charlie Blackmons, Jeff Bagwells, Jason Werths and Johnny Damons all cultivated excessive chin manes through the past decade which sent announcers to the Smith Brothers cough drops reference store, while observant baseball hipsters went the House of David route. Looking at all those bearded 19th-century Americans in the Gallery reinforced my proud indifference toward the hair trend as it relates to American history and our former national pastime.

Seeing Brown’s face up close gave me a good feeling about Moran and his excessive ginger beard as he prepared to face Nationals genius hurler Max Scherzer on a Palm Sunday afternoon. D.C. was in bloom, overcast skies loomed over the Navy Yard and there was that mild spring heat that creeps in for cameos during April. Sure enough the Bucs had Max on the ropes in the first inning and Moran struck a ringing ground ball single to right to make it 2-0 Pittsburgh. This was after big man Josh Bell blasted an RBI double hard off the right field scoreboard to score Adam Frazier who led off with a laser single to right. Several players in the Pittsburgh batting order surely remembered Scherzer’s performance on the very same pitching mound in June of 2015. He no-hit the Bucs and damn near threw a perfecto if it wasn’t for a dodgy hit-by-pitch of Jose Tabata. Scherzer and his trio of Cy Young Awards was up against Pirates aspiring ace Jameson Taillon, a stoic Texan and cancer survivor who has certain Napoleon Dynamite qualities though he never forgets his ChapStick.

Sitting in the fourth row just off the Pirates on-deck circle opens up the baseball sensory experience. The guy behind me called for a no-hitter repeat and Frazier put an end to that nonsense. Sitting close, I notice the instant replay guy with his 1980s headphone kit is reading a Catcher in the Rye paperback (he wouldn’t have one single review during the Sunday contest). I notice home plate umpire Kerwin Danley, who had a difficult time with the strike zone all afternoon, give the leftover baseballs from his belt satchel to the kids lined up along the walkway railing. I notice Anthony Rendon, leading the NL in hitting and who worked out in the indoor batting cage just prior to first pitch, execute his opposite field hitting he was practicing to tie the game. Right now, painfully early in the season, it looks like the Nats were wise to put a lot of eggs in the Rendon basket once the Bryce Harper Distraction Circus left town for Philadelphia. Rendon has been scary good on both sides of the ball, as football types would say.

As for Nationals Park (What? No naming rights?), it appears to be an architectural run-on sentence. The lower bowl seats seem fine, but the upper decks are great distances set back and the top level requires the Hubble Telescope to see the game. Endless construction of gentrifying loft condos beyond the left field wall means giant cranes loom on the outfield horizon and those scattershot seating areas look like an incomplete building zone. The giant scoreboard in right center has a P.T. Barnum edge to it and half of the ballpark neighborhood is like one big exit ramp from some feeder superhighway gliding in from Maryland to save the day. I had to resist endless Walgreen’s jokes given the home team’s scripted “W” logo similarity to the pharmacy chain.

Sitting down front you’re among D.C. lobbyists and lawyers and their young sons who cross their legs like adult judges might and already seemed jaded with fourth grade credentials. And the laminate army in the aisles down front is made up of Ed Harris types in search of a good bowel movement, maybe not today. You also get to see the modern day ephemera of the on-deck circle which forces the hunchback batboy to drag out a piece of carry-on luggage and empty cans of grip spray, weighted donuts, rosin sacks and other windfoil resistance devices to be affixed to bats in an effort to eventually ease the in-game swing.

The other-worldly Presidents mascot race—a staple for ESPN’s SportsCenter kooky footage file—goes down with Teddy Roosevelt tumbling with the lead as he looks back to taunt Washington and Lincoln and whoever the hell else is the fourth Commander in Chief in the race. Lincoln wins this one. The Ohioan in me longs for a Taft and McKinley to be in the running to give it a rotund, sumo wrestler on-the-go vibe. No dice on that as I imagine the mascot costume maker conjuring the hairdo of our current President for future mascot races.

Instead, we have a Yan Gomes sighting as Taillon absolutely embarrasses him with a strikeout looking in the fourth. Also seen up close was good old Melky Cabrera, the ex-Yankee now tearing it up with the Bucs who are like his eighth team in the last eight years. As he flies out you’re elbow-to-elbow with the grounds crew who are about to rake the infield and replace the bases. The actual plinths are called “Hollywood Bases” and have the name Jack Corbett under the logo.

As the game progresses the few fans behind me in the mostly empty Delta Sky360 section are talking about Tiger Woods and the Game of Thrones final season and flirting with the field reporter blonde from MASN named Alex who is straight out of Anchorman.

Despite the Any Given Sunday sentiment it’s still hard to watch Pirates scrub pinch-hitter J.B. Shuck come out to the on-deck circle and try to time Scherzer’s warm-up pitches. This is why baseball is beautiful and humbling. Perhaps one day journeyman Shuck will gather his grandchildren around and tell them about that Palm Sunday when he hit a foul ball off Scherzer. And the kids will ask him to retell this great tale of achievement.

The night before the game on Connecticut Ave., I had a laugh when I spotted a guy wearing a full-blown Brian Dozier Nationals jersey. I left my Brian Giles 1999 Pittsburgh away pinstripe jersey at home, so I could chortle at this fellow wearing the Dozier kit. Meanwhile, back to the game—a Melky Cabrera 3-3 groundout to Ryan Zimmerman took 20 minutes to complete between the two geezers.

As the Bucs pulled out a 4-3 win thanks to Jason Martin’s ground-rule double late in the game, I enjoyed the late-innings dubstep musical interludes. He beat a Nats set-up man who was throwing his fourth-best pitch to the youngster we got in the Gerrit Cole deal with Houston (along with beardy Moran). As we made our way out of the high-end bowels of Nationals Stadium, we were paused by a security guard who had to let another geezer through to a private elevator. It was Ted Lerner, owner of the Nationals, and he looked like a premature baby bird moving slowly to the doors with a police escort, of all things. So powerful and wealthy but yet so helpless. I noticed the cop escorting him looked just like the rapper Lil’ Kim.

As I found the exit, employees tried to direct me to the Uber/Lyft area and I said, “No thanks, I’ll take a regular taxi.” Within minutes I hailed a sturdy Crown Victoria. The Haitian driver was listening to the Nationals postgame on the radio. Beautiful. He saw my Pittsburgh hat and shirt and of course asked me about the Penguins and Crosby. Lest we forget, the nation’s capital, even with its checkered baseball history, is the home of the defending Stanley Cup champions. The Capitals play their home games directly across from the National Portrait Gallery and yes, many of those ferocious skaters have beards, especially during the playoffs.