The Shutting Down of Opening Day

Return the honors to Washington, D.C. 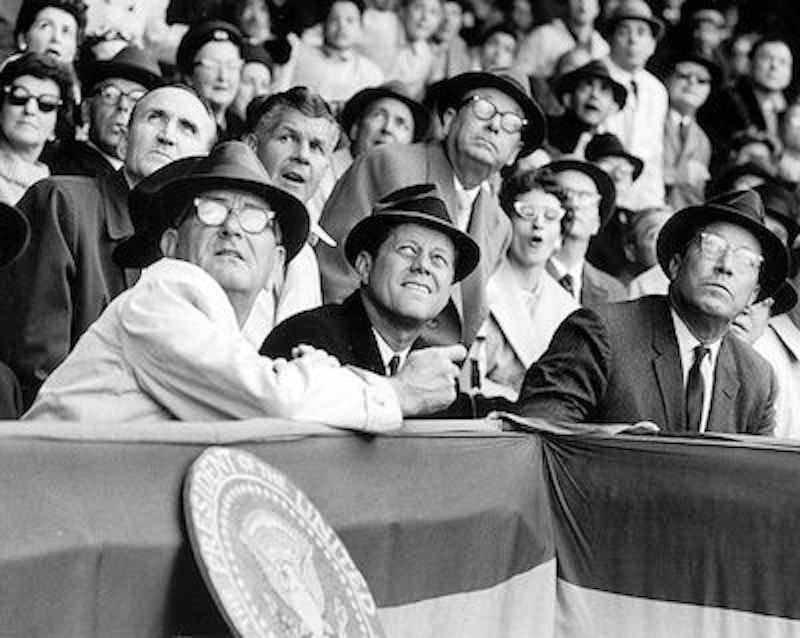 It was 58 Aprils ago, April 10, 1961, to be exact, that I was in the crowd at Washington’s Griffith Stadium for the Opening Day of the new baseball season. As I recall, it was a cool but not unpleasant afternoon. I’d been allowed to miss a day of fifth grade in order to join 26,724 others to see the Senators play the White Sox. Along with me in the crowd was the President of the United States, who was there to throw out the traditional first pitch.

The Senators were not going to scare anyone that spring and summer. They were a brand-new expansion team, the old Senators having moved to Minnesota to become the Twins. The expansion Senators, hastily put together via a draft of cast-offs from other teams, were a motley collection of baseball cards—Coot Veal, Billy Klaus, Willie Tasby, Chuck Cottier, Harry Bright, Dutch Dotterer—now dusted off and once again inserted into a lineup. They’d end the campaign in September with a 61-100 record, 47.5 games behind the slugging Maris/Mantle Yankees and tied with the Kansas City Athletics for the worst record in baseball.

But on Opening Day the Nats were 0-0, just like everyone else. Further, the game was the only one on the Major League card that day—Opening Day at that time was a D.C. exclusive—so if the Senators won, they’d be 1-0 and astride all of baseball for a full 24 hours. At least that was the way one 11-year-old looked at things.

Such racing thoughts were tempered by the Opening Day ceremonies, however. President John F. Kennedy was preparing to toss out the first ball from his bunting-festooned box located to the home plate side of the Senators dugout. Kennedy had taken office only three months earlier. His presidency was still in its honeymoon phase, and his first 100 days were marked by energy, excitement and what he liked to term “vigor.” As viewed from across the diamond, he appeared to enjoy his new role in the national pastime. Wearing a blue pinstripe suit, white shirt and maroon tie, he was now also holding a baseball. Surrounding him were his vice president, Lyndon Johnson, and many cabinet members, as well as the Washington and Chicago managers. In front of him, on the field, were all the players from both teams.

At the appointed moment, Kennedy reared back and threw the ball into the scrum. There was a scramble for a moment and then Manuel Joseph “Jungle Jim” Rivera emerged with the ball and then, as dictated by tradition, he brought it over to the president for his signature. It was later reported that Rivera took a look at the signed ball and said to JFK, “What’s this garbage? Don’t they teach you to write any better than this at Harvard? Give me a signature somebody can read!” Supposedly, Kennedy, enjoying the moment, complied by carefully printing his name underneath his signature.

Kennedy may have been a new president, but the tradition of the country’s chief executive throwing out the first ball went back half a century to 1910, when William Howard Taft first performed the task. As we wait to see if President Trump ever joins in the tradition, it’s instructive to see how faithfully almost all the presidents since Taft have risen to the occasion. Wilson threw out the opening pitch three times, while Harding, Coolidge and Hoover never missed an opportunity. Franklin Roosevelt did it eight times, Truman and Eisenhower seven each (Truman both right- and left-handed; Ike the first to wear a baseball glove). After Kennedy, Johnson did it three times, Nixon a couple, Ford once and Reagan three times.

George H.W. Bush was the first president to throw from the mound (using his old first baseman’s mitt), while Clinton, G.W. Bush and Obama all gave it a go. The only president not to do it was Jimmy Carter, which seems odd because he was famous for playing in softball games down in his home of Plains, Georgia.

What did change over the years was that Washington’s role as the host city for Opening Day disappeared. This happened after the Senators skipped town following the 1971 season and moved to Texas to become the Rangers. Without a team in Washington, the official opening day moved elsewhere, first to Cincinnati and then to wherever television dictated. Because of that, Richard Nixon threw out the first non-Washington opening pitch in Anaheim in 1973, and his successors did so in Texas, Baltimore and Chicago. By the time Washington had a team again in 2005, this time known as the Nationals, George W. Bush threw out the pitch, but it was no longer Opening Day for baseball—that tradition having been jettisoned, maybe never to come back.

I’d suggest that if MLB wants to assert its primacy among all sports, it should consider returning its Opening Day to Washington, and exclusively so. There’s a strong franchise in place there now, and a president who once played at least high school baseball. Maybe it’s something to work on for 2020. In the meantime, the game’s collective wisdom put the opening contest of the 2019 season Mariners vs. A’s—in Japan. Did anyone throw out the first ball? I was asleep, so I’m not sure. The thinking seems to be that if baseball can’t be the national pastime any more, maybe it can somehow sneak in for consideration at the international pastime. At which the 11-year-old version of myself and I look at each other over the vale of time and just slowly shake our heads.