The Blass is Half Full 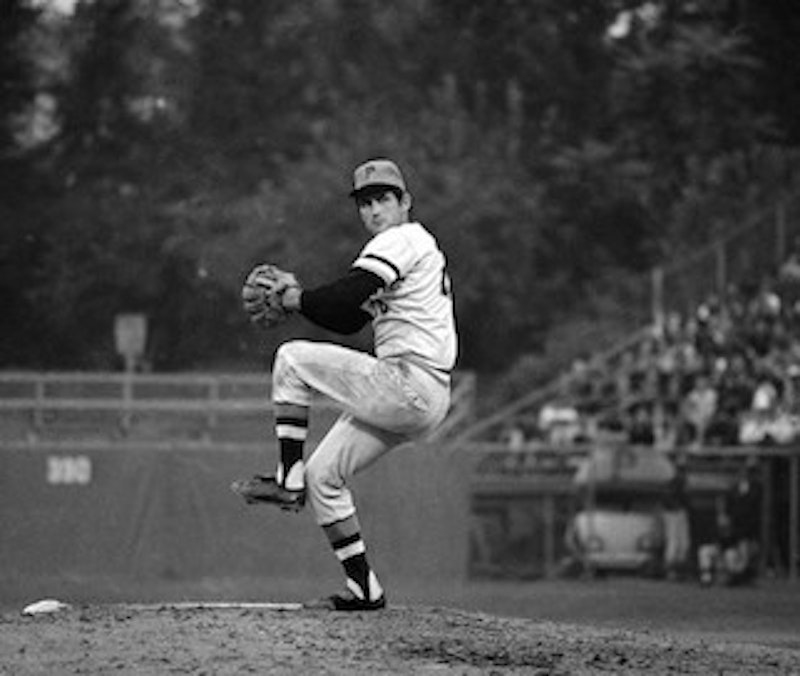 Technically, the first time I was “scooped” as a journalist was in October of 1971. I was seven, living in Knox County, Ohio. It was Mrs. Hennell’s second grade class and she always started the morning with a student stepping to the front for a “current events” report. Sure, you could check in with President Nixon’s plans to visit China, or your own take on the Pentagon Papers or the alleged death of Doors frontman Jim Morrison in Paris. It was freeform and designed to get us kids paying attention to the news. Mostly it was girls who did the current events reports, usually just cribbing whatever Cronkite led with the night before on his CBS telecast.

But on the morning of Monday, October 18, 1971, I was itching to tell the class that my Pittsburgh Pirates had indeed beaten the Baltimore Orioles the day before to win the World Series. I tried to position myself to volunteer but the teacher had already let a girl named Mitzi walk to the front where she soullessly mouthed a horrible summary of Game Seven and that the Pirates had won it, and, um, like, the winning pitcher guy was somebody named “Steve Glass.”
“It’s BLASS!” I yelled, red-faced, from my seat near the window covered with brown construction paper acorns.

Mrs. Hennell would have none of my outburst and sent me to the hallway, just as she did the previous Thursday afternoon when she discovered during class that I had a transistor radio and ear bud listening to a scratchy broadcast of Nellie Briles’ brilliant two-hitter to win Game 5 in Pittsburgh. I didn’t hear the end of the game because my teacher said this: “You march yourself up to this desk and put that radio right on my desk young man.” (She was probably a sour grapes Reds fan.) She then sent me out the classroom door to face the traditional hallway banishment. When the principal of the school, Mr. Rhodes (no relation to Ohio Governor Jim Rhodes who made some noise at nearby Kent State University the year before) found me standing there, he was not amused when I immediately asked for a score update and if Briles was still pitching. By the time I got my audio gear back after school, Briles was doing his postgame interviews and the Series was headed to game 6 in Baltimore with the Pirates up 3 games to 2.

Despite not getting to report it to my fellow nose-picking second graders, Steve Blass’ win in Game 7 on that Sunday afternoon was a masterpiece. His stuff was wonderfully superb—his second complete game of the series. His angular wind-up was full of arm motions that aggressively threw his glove hand way up and behind his head while he almost fell off the front of the mound with each delivery. In the clincher he struck out five Orioles and had a sublime pick-off of baserunner Don Buford. Manager Danny Murtaugh gambled by saving Blass for a game seven, but the Irishman’s luck obviously paid off. And Blass’ sky-high victory leap into the arms of first-baseman Bob Robertson is a gesture that has become part of Pirates lore. So much so that it is used in the “Blass 60” logo the Pirates unveiled this spring and have festooned onto their outfield wall at PNC Park.

Blass, who has been broadcasting Bucco games for 36 years, announced in March this would be his final season behind the mic. The zero digit in the “60” logo is formed by an old radio microphone. The number represents the total years Blass has been involved with the Pittsburgh organization that drafted him out of high school in 1960. Marty Brennaman’s retirement in Cincinnati is getting much more play, but for my buck, Blass and his bizarre sense of humor and knowledge of the mental machinations of pitching is far better than having to stay off Brennaman’s lawn on a nightly basis.

So on Blass’ 77th birthday last week, I drove to Falls Village, Conn., his hometown, to see what I could see and honor the man who middle-aged Bucco fans still worship. Though he lost his pitching control and abruptly ended his career after that World Series success and just months from his first All-Star team selection, fans got to know him through his community involvement in Pittsburgh and his general bonhomie. He won 103 ballgames in his career, with a 3.63 ERA. For a man who endured the agony of such a sudden loss of what are now called “mad skills,” Blass has certainly spread plenty of joy. Late in the game he tosses dozens of small souvenirs out of the press box booth down to fans below. He enjoys a stogie and does plenty of charity golf tournaments.

The yarn-spinning Blass has a great foil in broadcast partner Greg Brown, who will tee up booth-friendly anecdotes from Steve like the time Blass had an amazing two hole-in-ones in the same round of golf. The Bucco front office has announced that Blass, already a Pirates Fantasy Camp mainstay, will remain employed as an “alumni ambassador” for the franchise. Another likeable aspect of Blass in the booth is he is not TV-polished. He often misses a beat or two with his gag lines, and uses oddly soothing archaic phrases such as “getting down to cases” when the games get tight.

Blass’ 77th birthday fell on a Pirates off day, and the Litchfield Hills were yielding to a misty rain as I aimed the Jetta north on CT Route 7. The village is supposedly the second-smallest town in Connecticut, wedged into the northwest corner of the state along the Housatonic River. How major league scouts found him in this remote corner of New England is a mystery, though the local Housatonic Valley Regional High School was known for quality ballplayers. There are, in fact, “great falls” in Falls Village where the river gets boiled by a good 25-foot drop. There is old railroad lore and of course a very old inn presiding over the village center. The lone visible commerce upon my mid-week visit seemed to be across the street in the red brick Jacobs Garage building. Attached to it with undersized signage is the Falls Village Package Store. Just 9.9 miles due west over the New York state border, it would be called the Falls Village Liquor Store, however, Connecticut being in New England, one is forced to use such puritanical euphemisms as “package.”

Inside the store, with her little dog Rachel resting in a cardboard perch on the front counter, is proprietor Ann Miller. She does her paperwork right out front on a card table and the store’s comfortably stocked with hooch. Cluttered, as most liquor stores are, but not too much. There’s no looming tower of empty cardboard about to fall on a customer. It’s a homey space. There are free calendars featuring “Scenes of Western Canada.” Ann wears a nice scarf and seems too classy for a liquor store yet she somehow fits in. Of course she knows Steve Blass, she says when I ask. She looks to be close to Steve’s age but I was not about to ask that question. Her former partner in the package store used to pitch to Blass when they were both much younger, she said. She knows Steve’s son David, nicknamed “Dusty” quite well. He lives nearby and runs his own excavation business. “The great thing about Steve is that he’s just a hometown boy,” Ann says.

She looks over my shoulder and out the window. Rachel is still sniffing my sleeve. “There goes a relative—Bill Blass!” as a blue pick-up truck glides by on Railroad St. Ann has a very nice smile that lights up her face. She says I should drive up to Dusty’s place and say hello. I learned many years ago to never “drop in” on rural dudes that have backhoes and such in their driveways. One can disappear in a quick, tidy fashion with no one the wiser.

I wonder if Dusty will go to Pittsburgh in late September when the Reds are in for the final home games of the regular season? The Pirates are giving away a Steve Blass Dual Player/Broadcaster bobblehead that weekend.

Having watched Blass do mostly Pirates home game broadcasts over the past 10 years, I’ve seen many of his Connecticut friends appear at PNC Park and he drops frequent references to his hometown scene as well as folks from Canaan, the main town that encompasses Falls Village in that odd New England manner that spreads four different hamlet names throughout a single village. It’s a quiet and impressive landscape until you get close to the falls, then it gets kind of loud. In his 2012 autobiography A Pirate for Life Blass wrote that Falls Village “represented innocence, a pride in oneself, and all that was good.” He may be correct. I searched high and low for signs of the opioid crisis or rural meth labs or sparechangers living under bridge overpasses. None were found.

A few tree service guys were taking a smoke break near the parking area of the Great Falls. No one gives you the death stare, and there are fewer Confederate Flags around, unlike certain upstate New York counties on the same latitude. There’s not a dive bar or gin mill or seedy roadhouse in sight around Falls Village. Believe me, I searched.

As a courtesy to Ann Miller and cash register canine Rachel of the Falls Village Package Store, I randomly purchased a $15 bottle of 2017 Seaglass Sauvignon Blanc which found its way to her store all the way from Santa Barbara County, California. Having switched from beer to wine last April, I figured it was good to gradually stock up for the Easter weekend games against the Giants. But then as I drove past Dusty Blass’ excavation compound on the way out of town, I thought, no, I will not open the Seaglass bottle. I’m going to save it, just in case something special happens to these Pirates this October, allowing one of their greatest all-time pitchers (and announcers) to sign off in style.