For U.S. soccer, everything is horrible and ruined. 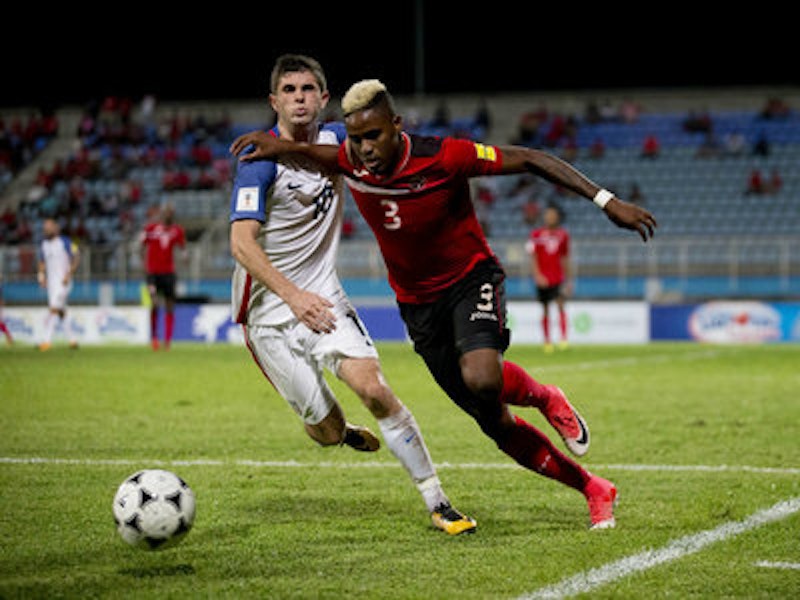 As a U.S. soccer nightmare unfolded on a warm October Tuesday, I asked the bartender what his headline would be in 80-point type across tabloid wood. The former draftsman from North Jersey, a man with no newspaper experience, paused while ringing up an old dude who had the nerve to order a grasshopper to go along with his wife’s chocolate martini.

“Trini-Dead” he said, nailing it, as only he can. I wanted to run to the payphone and call it in. Instead, there are only websites now and they don’t take calls from landlines.

The U.S. men’s soccer team had just lost 2-1 to spoilers Trinidad & Tobago, an unlikely result in the CONCACAF qualifying which was matched by two more unlikely results from Panama and Honduras that led to the unlikely exit of team U.S.A. from next summer’s FIFA World Cup in Russia. I think the first site to use the “perfect storm” cliché was in fact the U.S. Soccer federation online presence.

It was fitting to witness this national sports disaster in one of the oldest inns in America, the Beekman Arms in Rhinebeck, NY. At the same bar where I saw the final Barack Obama election results for his first term sitting with the late playwright Romulus Linney, the same bar where Franklin Delano Roosevelt used to hang out on trips from nearby Hyde Park. Throw in an Aaron Burr, a George Washington, a Benedict Arnold and an Alexander Hamilton and you have the Americana pedigree of a building where I spend many an evening hour watching baseball or hockey or soccer on their understated barroom television. Hours spent at that bar have brought me conversations with right-wing jazz percussionists, audio engineer/gun nuts from Cleveland, and songwriter Chip Taylor (“Angel of the Morning” and “Wild Thing”).

The Beekman Arms bartender nailed the headline probably because legendary newspaper editor Horace Greeley used to enjoy drinks at the Beekman Arms and might’ve written a few headlines there himself. One of Greeley’s famous quotes include “Fame is a vapor, popularity an accident, and riches take wings. Only one thing endures and that is character.” So true for the American soccer players, who are now more famous for losing to Trinidad than they would’ve been for advancing to the World Cup. Perhaps they couldn’t step up and grab the spotlight because this game was lost on the cable landscape to obscure Bein Sports. ESPN was busy with the NBA. Fox was supposed to be tied up with MLB postseason action.

So, ever so silently and just like that with a clink of a pewter tankard, the U.S. boys played their way out of the greatest sports tournament aside from NCAA’s March Madness. An utterly listless first half cost them dearly, but all was well because Mexico was beating Honduras and Costa Rica had a handle on Panama. It all changed in a horrific 45 minutes of Telemundo fragmented coverage. All the final qualifiers were played at the same time to prevent any rigging. As the U.S. game kicked off, pundits reported a 93 percent chance the American squad was going to win or draw and therefore qualify for Russia next summer.

Nyet to bogus U.S. coach Bruce Arena, a proven loser who was brought in with ridiculously undeserved fanfare to replace the too-efficient-but-not-emotional-enough German legend Jurgen Klinsmann after losses to Mexico and Costa Rica. Klinsmann stood his ground and did not buy into the insistence by U.S. Soccer officials to favor the fraudulent Major League Soccer with most of its players knowing it is an ersatz confederation that is a corporate tax shelter for a handful of owners providing one final paycheck for former European stars.

Klinsmann should have the last laugh as the U.S. Soccer Federation overloads indeed.com with job openings in the next few weeks. It’ll be a bloodletting for the Chicago-based front office which has several “lifers” who seem to be operating their own fantasy version of FIFA or the highly questionable Football Association in England. Sports marketing and sponsorship losses will no doubt pile up above the transom as the cold facts of a qualifying failure set in as the rest of the major sports in the U.S. are in full swing. Having been in every World Cup since 1986, there is plenty of egg on face for the U.S. Soccer Federation as of this writing.

I was in Paris in 1998 when Steve Sampson’s embarrassing squad was home before the postcards, losing to Germany and Iran and Yugoslavia. They scored only one goal, a Brian McBride tally against Iran in the closing moments of an iconic 2-1 loss that featured a lumbering Alexi Lalas, now a curmudgeonly broadcaster who will get lots of attention in the next few days wagging an “I told you so” finger.

The bottom line is next summer will now suck because the U.S. 11 couldn’t get it together for 90 minutes on a soggy pitch in Couva, Trinidad in front of a few hundred “Soca Warriors” supporters. We will now join Scotland and avert our feeble eyes when the spectacle of World Cup soccer is played in Russia next June. With all the Russian connections from our current president, it’s ironic our national team will not be mixing it up with the rest of the world in cities like Kalingrad, Saransk and Nizhny Novgorod. I have overinvested emotionally in this national team over the past few years and regretted not seeing them live in early September for a World Cup qualifier game in New Jersey. I regretted it until the same barroom television revealed a sleepwalking U.S. squad suffering a 2-0 home loss to Costa Rica with nary a shot on goal in the soccer-only Red Bull Arena in Harrison.

I’ve spent much of the past several weeks attending college soccer matches in the Hudson Valley. The division I Marist Red Foxes, who have several players from the upstart semi-pro Kingston Stockade, have been struggling of late. The Bard College Raptors, a lowly division 3 outfit, have been losing in overtime but still improving since the passing of their coach Andy McCabe last year. I was pleased to see the Bard team wearing “AM” on the backs of their jerseys in honor of Andy. I am one of the few non-parents in attendance of these games, and even helped a Yonkers lady with proper directions to the Taconic Parkway after she came up to Annandale to see her son represent RPI against Bard.

It was a rousing match in this strange autumn heat on a day when I spotted Ric Ocasek and Wallace Shawn at the nearby Rhinecliff Amtrak station. Sometimes it’s too much when you lose something to look forward to months down the road. The last time we sucked this bad and didn’t make it was 1986, when only 24 teams went to Mexico for the tourney. That year is was the hosts Mexico and Canada, representing CONCACAF for crying out loud. Now there are 32 squads that will make it to Russia next June.

And we will not have even the slightest Russian hacker representing us.