Pro football is a business, not a platform for social justice. 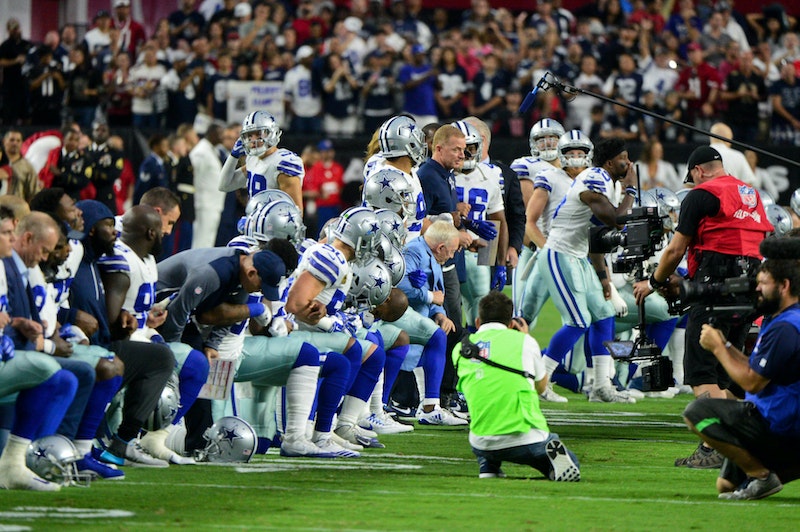 The Colin Kaepernick “take a knee” controversy has dragged on for over a year now, and the opinions attached make you question a lot of people’s understanding of very basic concepts. For example, you'll see many on social media voicing their opinion that NFL players have a First Amendment right to protest during the pre-game national anthem. Do these people also think that the fellow selling you your sandpaper at Ace Hardware has a constitutional right to wear a MAGA cap because he feels obliged to protest abortion? No, they'd immediately report the employee and try to get him fired. The political left is vengeful. The First Amendment applies only to governmental restrictions on free speech, not on workplace restrictions.

The latest in the Kaepernick controversy involves ESPN handing a two-week suspension to its on-air personality Jemele Hill after she called for football fans to boycott Dallas Cowboys sponsors after owner Jerry Jones told his players they must stand for the national anthem if they want to play in the game. The New York Times ran an op-ed that condemns the sports network for its callous disregard for justice, but it lacked even one cogent thought.

Jemele Hill recently tweeted that Donald Trump is a white nationalist who surrounds himself with fellow white supremacists, putting him in the same category as a Grand Wizard in the Ku Klux Klan or a neo-Nazi. She also claimed that he was elected because he’s white, which doesn't even make sense. ESPN took no disciplinary action then against Hill, even though she violated corporate rules on social media behavior. On the other hand, ESPN fired Curt Schilling after he tweeted a provocative meme protesting new bathroom laws applying to transsexuals.

The Times op-ed author, Kashana Cauley, writes that ESPN “might be scared of boycotts and that the Cowboys sponsors, as well as the network’s own, are more important than supporting the idea that black people are people.” This tips the reader that she's offering an emotional appeal rather than a reasoned argument. How many people actually believe that left-leaning ESPN would work against black people being viewed as human beings?

In the next paragraph, Cauley states that “an obscenely large number of black people are killed or brutalized by police officers in the United States,” and she includes a link that one would assume is going to document this with hard data, but the link was to another Times article that offers no supporting evidence. If obscene numbers of unarmed blacks are really being killed by cops, then a publication like the Times owes its readers something tangible, instead of asking them to accept this as an article of faith.

Kaepernick started his protest in 2016, when Barack Obama was President and only 16 unarmed black men were killed by police, meaning that lightning was just about as likely to end their lives. Police should not be killing any unarmed people of any race, but 16 deaths in a year, out of a population of 21.5 million black males, does not represent an “obscenely large number” of police killings, especially when looked at in the context of total police killings of unarmed people of all races.

As for her claim that ESPN might be afraid of boycotts, she may just be right, but the sports network is a business, not the NAACP. AT&T, which is one of the Cowboys sponsors that Jemele Hill has targeted for boycott, ran 30 ads on ESPN last weekend. It's remarkable that Hill still has her job after directly attacking her employer's revenue stream so blatantly. AT&T has done nothing to hurt the cause of justice for black people. Hill’s actions are so reckless that one might be tempted to speculate that she's trying to get fired in order to become a martyr and move on to a better job. The author states that ESPN pays Hill to express her opinions, but calling for a boycott against an important sponsor is pure political activism, not the expression of an opinion.

Cauley then swerves into surreal territory by writing that ESPN suspended Hill to increase ratings, just like it did when it wouldn't let its Asian-American football announcer Robert Lee call a UVA football game because his name is the same as the Confederate general’s. To claim that the network would think this would boost viewership to a local game that wasn't even broadcast nationally is ludicrous. PC-crazy ESPN had lost its marbles and was so paranoid that it thought that Lee’s name would trigger ultra-woke football fans, so it moved him to a game far from the hotspot of the moment, Charlottesville.

Anyone hanging in there with this article after that nutty paragraph could only be a true believer. The writer cites a poll finding that 51 percent of Americans support the player protests, seemingly unaware that the NFL and Jerry Jones are concerned only with their customers—that sub-group of Americans that watch their games. A JD Power poll that's actually relevant to the topic is one that found that the anthem protests were the number one reason people stopped watching NFL games last year. These are the people who pay the massive salaries of the NFL players Jemele Hill champions.

Cauley, a former staff writer for The Daily Show with Trevor Noah, writes that she's having a hard time watching the NFL this year, partially because she's concerned it's not addressing domestic violence. Perhaps she didn't hear that the league suspended Cowboys running back Ezekiel Elliott this season for six games over a domestic abuse claim that police deemed unworthy of basing criminal charges on. Think of the strong warning message that sends to its players. This article is the perfect example of what the left does best—devour itself with purity tests. ESPN has veered way to the left, bending over backwards to cater to a certain political segment, but nothing it's done in the past will ever stop the rabid few from turning on it when it suits their purposes.