Can a grassroots soccer league in Kingston get a witness? 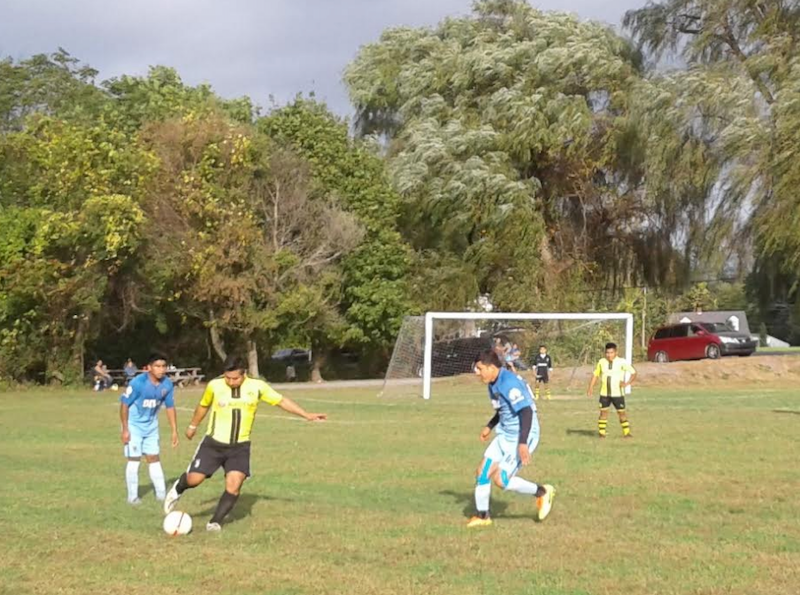 The failure of the U.S. men’s national soccer team to qualify for the 2018 World Cup in Russia sent me on a Girl on the Train-style obsessive quest to solve a mystery in Kingston, NY. For the past year or so I’ve driven past a parcel of land wedged between a feeder road that provides a shortcut from the Exit 19 cloverleaf of the New York State Thruway and the Stockade District of the state’s first capital to the state route leading to the Kingston-Rhinecliff Bridge spanning the Hudson River with access to Dutchess County. It’s teardrop-shaped acreage behind some discount gas station/convenience stores, opposite a remote gym on a dead-end road splitting off from the shortcut highway.

The time-lapse photography goes as follows: I first noticed it as a shipping container storage and junkyard. Soon the containers were gone and grass was coming in atop the dirt. Then, two soccer goals appeared at appropriate ends. I thought nothing of it as several migrant worker housing areas around the northern Dutchess orchards typically install soccer goals for laborer recreation. Nets soon appeared on the goal frames, then touchlines were laid down with a picnic table alongside. A few weeks later, pop-up canopy tents dotted the sidelines. Then there was children’s playground equipment. Then wooden canopies appeared on the opposite sides to serve as bench protection. After that, an above ground pool appeared with a smart deck around it. And on Sundays, players were taking to the pitch wearing colorful pro replica shirts with minivans on the lot; a closer look revealed massive coolers and large grills being pressed into service and children kicking balls about on the steep hill leading to the highway. So cute, many soccer fans thought as we bustled by.

But then I noticed referees and linesmen. This was no immigrant picnic folly; this was an official league.

It had been on my list to examine further for several weeks as a tumultuous summer concluded. Numerous information-gathering sorties were aborted. There was a sudden lightning storm that sent everyone scattering. A few weekends later it was a construction screw scything into the rear passenger tire on my Jetta, forcing a quick exit as I pulled into the lot to join a decent-sized crowd watching the dusty action. But the weekend after the disgraceful U.S. national team disaster, I alighted fancy-free and without obstacles to finally take in a match on this transformative field of soccer dreams just a mere quarter-mile from Dietz Stadium, home of the semi-pro Kingston Stockade FC.

It presently has a two-story wooden “press box” style pavilion along the center stripe, with a rigged public-address speaker. Across the way there was official wooden shelter for the game officials. Affixed to the top rail of the press box pavilion and rippling in a strong autumn wind were the flags of Honduras, Mexico, Argentina, Guatemala, and (to the rear of the pavilion) the United States.

It’s called “Campo de Fe” and soon I would learn why.

Walking toward the pavilion I marveled at the chiaroscuro light falling on the hyperactive players. The pitch smelled of cut grass, the traffic whizzing by on the highway created an artificial spectator hissing sound. There couldn’t have been more than 50 fans in attendance as two teams battled. One squad wearing the replica shirts of Argentinian powerhouse Boca Juniors, while the other wore the working-class hero German kit of Borussia Dortmund, an alarming yellow and black combo that could stop oncoming autobahn traffic from 50 yards. Storms appeared to be coming over the mountains of Woodstock to the west, but play continued with abandon. As I stood on the midfield touchline, the first 10 minutes I witnessed spirited action. Crossbars were struck, the wind-aided goal kicks appeared menacing as they screamed down the pitch. Not a second was wasted. The Dortmund side was hanging on for dear life against the oversized Boca team. After 10 minutes as the lone gringo wearing black jeans and monkey boots on the scene, a man approached me from my right. “Hi there, my name is Willy,” he said, offering his hand. I introduced myself and sort of explained my reason for being there. Behind me were several women tending to the grills and preparing ethnic foods for consumption. There was no signage regarding price or what was available. Everyone there had been there before, myself excepted.

It soon became clear Willy was kind of a league official for what’s known as the Ulster Soccer League, borrowing from the fact it is located in Ulster County. Indirect questioning on my part revealed that the league is 10 teams that all play on Campo de Fe. Willy says that is Spanish for Field of Faith. There are teams from Hudson, Catskill, Saugerties, Kingston, and Red Hook and some organized by local ethnic enclaves. The Dortmund team is actually Guatemalans from Kingston called La Furia and they are “from a specific region” Willy said. He runs a landscaping business adjacent to the field property and told me he was given permission to manage the field by a local woman who wanted the land to be used to spread the gospel. Its Facebook page lists the league as part of Worldwide Ministries All I Can in Christ, Inc. It appears the teams are self-managed lots, without a central charismatic figure or evangelical master. The ball is round, it is a game of two halves, hallelujah!

Willy does not try to convert me as we stand side-by-side and watch a good 70 minutes of passionate soccer unfold. He laughs at his friends who work for him in his landscaping firm, two short guys playing for the hardworking Dortmund team who are struggling to complete passes against the Catskill giants. There’s mild heckling, in Spanish, from the press box pavilion which I realize could easily be converted to a pulpit if the landlord lady insisted, but as Willy tells me they have five games every Sunday starting at nine a.m. Obviously, the spiritual calling here is strictly soccer. And it’s divine.

Willy has hulking mulch piles beyond one end of the pitch, while the other end is framed by two enormous weeping willow trees that also provide their own version of crowd noise. There are trailer-type office/housing structures beyond the swimming pool. He tells me he needs to make the lot look better in order to increase his landscaping business. As stray balls leave the pitch and players chase them onto the highway or into deep brush on the lot, Willy says, “I guess we need more soccer balls.” This is the kind of thing that can happen in Kingston, where town officials are more loosey-goosey with zoning and land usage regulations. This is some handshake deal that doesn’t require further scrutiny and Willy, as well as the league co-founder who showed up later with a digital camera, appeared quite free of stress.

Later, I check out the league Facebook page and realize the decks, roofing, and swimming pool are all part of an outdoor catalogue of Willy’s landscaping and construction skills which masterfully double as Campo de Fe amenities. He has engineered a clever way of running a business on a forgotten lot and also hosting a thriving soccer league.

Number 88 for the Catskill team, which won the league last season, is a large fellow with mad striker skills. He towers over the Guatemalans and finally tallies a booming goal that gives Catskill a hard-fought 2-0 lead. “That is pretty good considering the Kingston team used to always lose 8-0,” Willy says after putting out a behavioral fire involving kids and the swimming pool. I take in the action which is end-to-end hustle as each second is cherished not only by spectators but by the players themselves, most of whom work tough labor jobs six days a week. Willy tells me this is the last Sunday of regular season games and the playoffs begin next weekend. As the three p.m. game concludes, the players for the five p.m. match pull into the muddy lot. One team is Catrachos—the Honduran squad named after their national team which might qualify for the World Cup if they beat Australia in a playoff set for Nov. 10 and Nov. 15. The Americans should occupy those dates if only the Mexicans had held their own against Honduras a few weeks ago as they were supposed to.

Regardless, the storm clouds rolled closer coming down the Catskills with sunset only a few hours way. The players open trunks and begin dressing for the game, kids run to join other youngsters kicking balls along the fringe of this Field of Faith, a glorious religious loophole that couldn’t have arrived at a better time.