Baseball: The Long and Long of It 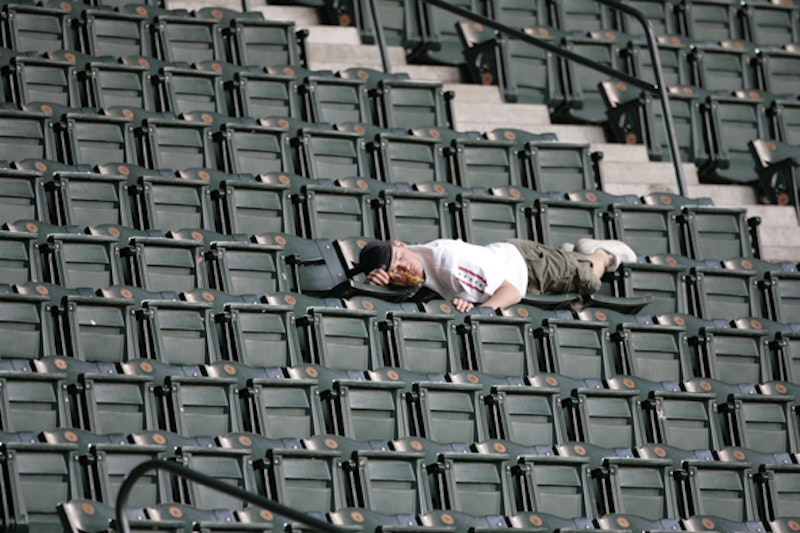 On Sept. 28, 1919, the New York Giants beat the Philadelphia Phillies 6-1 in a nine-inning game that lasted 51 minutes. Granted, the game came on the last day of the season—the first half of a double-header that must’ve been torture for the players. At the end of the day, the Phillies would sit a distant 47.5 games behind the pennant-winning Cincinnati Reds, while the Giants would end up nine games back. Clearly, the players in Philadelphia that day were in a hurry to shut things down and get back home for some off-season hunting, fishing, and drinking beer out of a pail. But still… 51 minutes.

In recent years, there have been renditions of the pre-game National Anthem that have lasted 51 minutes. There have been relief pitchers who’ve taken 51 minutes to wander in from the bullpen. Robinson Cano takes that long to exit the batter’s box after hitting a home run (or even what he thinks might be a home run).

Which is to say the game has slowed down considerably since 1919. A typical American League game has grown from around an hour-and-a-half in the 1920s, to one hour and 58 minutes in 1943, to a stultifying three hours and five minutes in 2017, an increase of about five minutes over the previous season. And that’s just the regular season. As we all know, it’s now when baseball truly wobbles off into deep space, sending fans both at home and at the ballpark into a post-season zombie state with gaping mouths, vacant eyes, twitching hands and feet, and, in many cases, a hunger for football.

Baseball claims to be aware of the problem of excessively long games. Commissioner Bud Selig used to periodically call for measures to shorten the game. He did this in the same way that American presidents periodically call for measures to reduce the national debt. Analysis shows that the initiation of MLB’s new “speed-up” rules in 2008 dropped regular-season game times from 2:51 all the way down to 2:49. If you can recall, Selig vowed to impose the same rules as the 2010 season began, yet the first two games of the year between the Red Sox and Yankees lasted nearly four hours each and brought a rebuke from umpire Joe West, who called the delay tactics employed by both teams “pathetic and embarrassing and a disgrace to baseball.” West, in turn, was criticized by Yankee Mariano Rivera and Boston’s Dustin Pedroia for daring to speak up, and reportedly admonished by MLB higher-ups. (It should be noted that no fans appear to have been consulted on the matter.)

Now, Selig’s successor Rob Manfred is making the same sort of noises. He says he’s “encouraged” by conversations he’s had with the union and “direct engagement with players,” whatever that means. Baseball management now routinely proposes changes to the way the game is played only to have them rejected by the players. (One of his proposals, which would limit catchers to one trip to the mound per inning, should be called The Gary Sanchez Rule.) Anyway, even if Manfred puts in serious measures to move things along, no one knows what might happen if teams fail to comply. My guess is that noncompliance would result in a long delay in the middle of the game as managers and umpires discussed just who was delaying the game, and how, and possibly even why.

You do have to wonder about a sport that, in an age when everything is delivered more quickly and efficiently, allows its product to drag on like a chess match in which the moves are sent back and forth by registered letter. It’s as if NASCAR suddenly decided to introduce the Daytona 5,000. Or Uncle Ben came out with a new product: Hour Rice. You’re headed down the wrong road, baseball, and at this rate you’ll never find your way home again.