The Disproportionate Cultural Impact of Tennis’ “Battle of the Sexes” 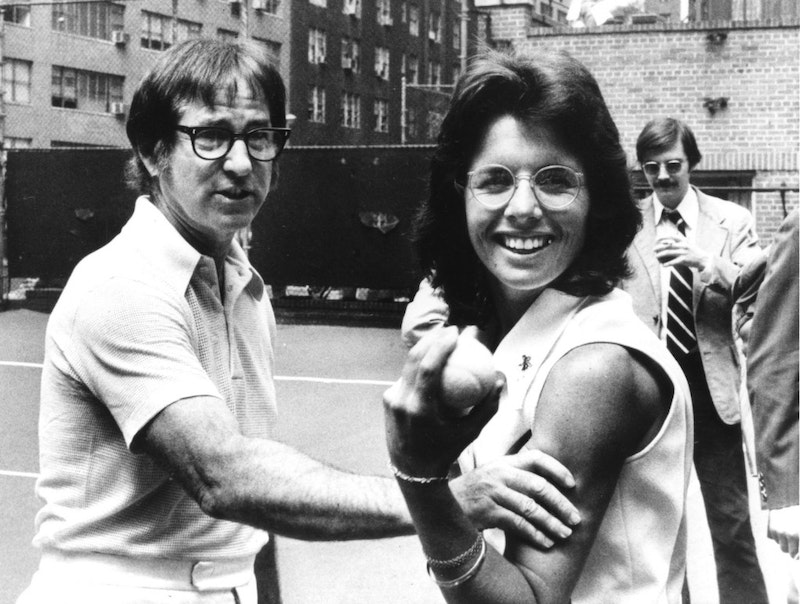 The story of how a 1973 exhibition match between tennis legend Billie Jean King and 55-year-old tennis hustler and former men's champion Bobby Riggs was perceived as an historical event transcending tennis was unlikely. What was essentially a sideshow—the tennis equivalent of a pro wrestling bout—morphed into an international spectacle. At this point, the event’s huge cultural impact is mostly a faded memory, but Battle of the Sexes, starring Emma Stone as King and Steve Carell as Riggs, will remind generations who weren't around at the time of the match’s indelible place in history, although it doesn't capture much of what was going on behind the scenes.

Ironically, the motor-mouthed Riggs, playing the male chauvinist pig/villain role to the hilt, ended up as an accidental enabler of female tennis players who were seeking financial parity with their male counterparts. When, in the course of brilliantly hyping the match, he said the “whole women's lib thing” had gone too far, and that soon men wouldn't even be able to stop at the bar after work anymore, both men and women perked up their ears. Due to Riggs’ masterful marketing, interest in the event grew so rapidly that it was played in the cavernous Houston Astrodome, while picking up an international television viewership of an estimated 90 million.

Despite all the hullabaloo, it was never destined to be much of a matchup, even though Riggs had demolished women tennis’ top ranked player, Margaret Court, 6-1, 6-2 in an earlier exhibition match. King, who had a 26-year age advantage over her colorful opponent, won 39 Grand Slam singles by the time she retired, but this was the one match she’d be remembered for. While it's true that there was heavy pressure on King to win, Riggs, who’d trained seriously for the Court match, barely broke a sweat preparing. Some believe that he threw the match for money. Whatever the truth, Riggs play was spotty and uninspired in his straight sets, 0-3 loss to King.

Despite all the dodgy, showbiz aspects of the match, it somehow went on to became a milestone for women tennis players seeking equal pay with men. The hyperbole was over the top. John Powers, writing for NPR, claimed it was “surely the most important” match of all time. About a match where Riggs was wheeled out in on a rickshaw pulled by sexy models he called "Bobby's Bosom Buddies," revered sportswriter Frank Deford had this to say about King: “She has prominently affected the way 50 percent of society thinks and feels about itself in the vast area of physical exercise.” In 1990, Time named Billie Jean King one of the "100 Most Important Americans of the 20th Century."

Time didn't mention Riggs’ lax training methods because that would’ve interfered with the feel-good story. King went on to convince her fellow players to form a union, which is how the Women's Tennis Association (WTA) came about. After winning the U.S. Open in 1972 and receiving $15,000 less than men's champion Ilie Nastase, as WTA president in 1973 King demanded equal pay or she'd sit the tourney out. Sure enough, the U.S. Open became the first major tournament to offer equal prize money for both sexes that year.

Professional tennis is unique in sports in that it often combines men's and women's tournaments. To fans of both men's and women's tennis, this offers the advantage of being able to watch a men's match and then walk a short distance to see some women's tennis. This also offers an advantage to women players, as they can point to discrepancies in prize money between men and women in the same tournament, even if the male players are generating the lion’s share of the revenue. WNBA players can't compare their pay to the men of the NBA, nor can women pro golfers do it with their male counterparts. Their respective competitions aren't held jointly with men, so they have discreet revenue streams upon which their prize money is determined.

A simple way to illustrate this point is looking at ticket prices for the U.S. Open tennis tournament for 2018. The men's semifinal will set you back $3,370, while the women's costs $989 for the exact same seat. While the demand to see the men play this match is 340 percent greater than for women, they receive not a dime more than a woman, while having to win three sets out of five instead of two of three. By what economic standard of capitalism could this be considered fair?

While most men on the ATP tour don’t think this is equitable, they're afraid to go public with their feelings. When the Serbian star Novak Djokovic spoke, saying men should get paid more because there's more interest in men's matches, he received heavy criticism for his honesty. When Ray Moore, CEO and tournament director at the Indian Wells tournament, said that women players ride the coattails of the men, which is harsh but undeniable, he got fired. When you've attained equal pay via a stunt match and the concept of “equity” rather than the free markets that apply in every other arena, you've built a house of cards.