This Is Your Ticket 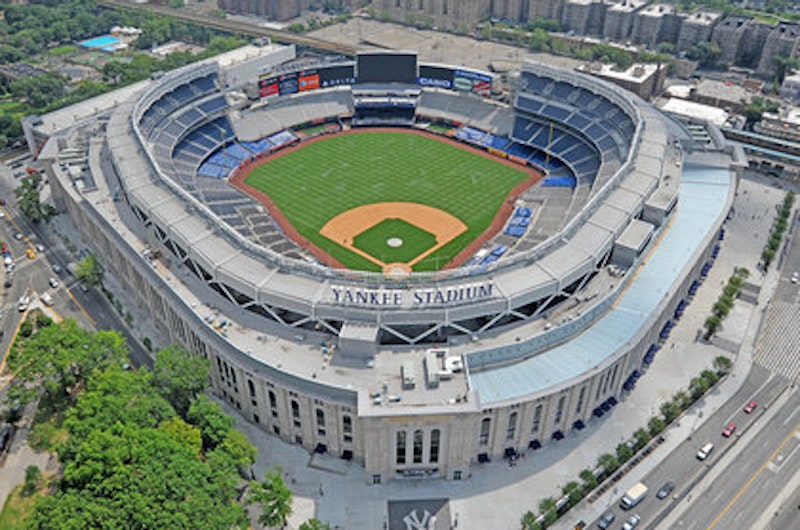 This is how you decide to go the game these days: you get home from the local tavern in a downpour and go to your email and download some junk from TicketFast regarding an oddball purchase attempt earlier in the evening involving one ticket to the Yankees vs Pirates game of Saturday, May 18. Adobe this and that comes up, and the printer groans out a sheet of barcode with Yankees.com ad copy and mlb.com offers all over it. At the top is the “no duh” nomenclature above the Yankees logo. It reads (to idiots everywhere, including you) “THIS IS YOUR TICKET.” Who am I, Jon Lovitz all of the sudden?

This technology put the old litho print shops out of business years ago. They used to print baseball tickets on a nice pliable gauge of cardboard with the team logo inked onto it in a two-tone mash of agate and smeared numerology that included a “rain check” and the “terms and conditions” on the other side.

Now the StubHubs of the world have enabled an online brinksmanship of instant gratification/convenience with random and panicky seller discounts available mere hours before the game. Like everything involving a personal computer with Internet access and credit cards lying about, there is an element of disbelief and mistrust. Is this really my ticket? Right out of my own kind of lame printer? What if hackers sent it with a messed up barcode? The ticket includes “transaction details” (online scalping!) and the uncertainty of having to carry an 8 x 10 piece of “typing paper” to a ballpark entrance and hand it to some brusque guy wearing a radio belt probably with a taser backing it up in a too-tight polo shirt and he scans it dutifully and you are in just like that.

Neither Yankees nor Pirates fans seem too worried at mid-May. The season has an almost puritanical parity to it already with more than two-thirds of the squads wallowing at or around .500, an NFL-like stupor that may not be breached until well after the All-Star break in Minnesota.

On this trip to the Bronx, which from upstate Rhinebeck on Metro North out of Poughkeepsie took about as long as the old subway ride from Borough Hall in Brooklyn, I decided to take names in a Steinbrennerian fit of reportage and on the spot firing/promotion. Here’s my short list tally of stadium personnel interacting with a solo Pirates fan on a mission to see some real National League baseball in the House that A-Rod Built.

FIRED: Agnes, the Haitian-American security woman at the turnstile who made me lift up my hat as part of the security check. I had no bag or any other item to inspect so maybe that is why she went for my hat.

PROMOTED: David the suite-guard who steered me in the correct direction through the pretentious “Great Hall” to the stairs leading up to the 200 level.

FIRED: Marguerite, the woman behind the Budweiser stand outside my section who carded me (age 50) upon purchasing a plastic bottle of beer.

PROMOTED: The Highbridge Youth Choir that sang the national anthem and gave it an extra kick with an additional “of the brave” line at the end. Nicely done. Fine, upstanding young Americans. If George were still alive he would have them every night plus throw in that eagle that used to fly in from the center field black during the late 1990s.

FIRED: Allan, the Stella Artois beer vendor who wandered the aisle announcing a six p.m. last call some 90 minutes prior to the arrival of six p.m.

PROMOTED: Dorian and Debra, double-teaming a Hebrew National cart outside the section. Debra said “Thank you for coming to Yankee Stadium” and Dorian added a brilliant “enjoy” as I toted my frankfurter back to a nice standing counter area overlooking the field.

A 4:05 pm start time on a May Saturday is an outstanding idea for baseball. Maybe that’s why I found so few people to fire in a Steinbrennerian fit. Gone is the escalator and winding ramp logic of the old park. The new stadium itself is not easy to navigate, given the aforementioned “Great Hall” that splinters into dead end corporate suite elevator shafts and glass doors manned by blazer guys with walkie-talkies. In fact, I hadn’t seen that many elevators since I worked at 1515 Broadway a million years ago. There are many rules stamped on doors and garbage cans, the caution stripes are hand painted onto the aisle steps, and the general baseball fan murmur is less loud thanks to all the new elbow room and open air pavilions. As a field of play, it is another disgraceful bandbox with no power alley in right. Routine flies soar into the right-field stands with the repetition of carnival clown grotesquery. Playing a right fielder is not necessary at Yankee Stadium; just bring him in on another ultra-shift as an extra infielder. The Mohegan Sun sports bar looms in the centerfield black like a Death Star, and buried beneath it is the once-revered Monument Park with its netting roof now making it look like some half-assed petting zoo on the way to Savannah.

I had a decent vantage of my sleepwalking Pirates from the second level over first base. They’d been rained out Friday night, so they probably stayed out at Scores until four a.m. and therefore made David Phelps look like Ron Guidry. It was a decent crowd in section 214B, a mix of frat dudes, geezers, glam couples and several other Bucco fans. In front of me was a Puerto Rican family with mom grading school papers while keeping an eye on the action. Beside me was a pair of very polite trekking British Columbians who decided to come east to see baseball since their Vancouver Canucks failed to make the Stanley Cup playoffs. They did say “eh” at the end of every sentence, especially when Yankees reliever Dellin Betances took the mound. Number 68 is enormous, looming on the mound like a linebacker. This is what live baseball shows you when you see these guys in person. I meant to ask the Canadians why there are always a few creepy Blue Jays fans sitting there in their jerseys at every game everywhere—like the pair sitting over our shoulders to the right.

The Yankees have opted for the Stockholm, Sweden-based Securitas firm to handle security details throughout the much calmer new stadium. The right field bleacher creatures have been parked in Siberia and are barely an auditory factor anymore. The grounds crew is still forced to do the “YMCA” thing and their enthusiasm rivals that of the Texas Roadhouse wait staffs having to stop mid-shift and line dance in the center of the restaurant. Children and Japanese fans seem to be at the top of the YMCA enjoyment list.

But if you really want to feel old among the new in the Bronx, look up and see the scoreboard picture close-up of Derek Jeter during his first at-bat. It’s the one where the captain looks like Morley Safer in a highly unnecessary HD close-up. The Pirates’ road woes would continue, and there were two instant-replay reviews that took the entirety of one Tom Petty song and one Duran Duran song. The Bucs will be back in New York in a fortnight with a Queens appearance on the schedule. They’ve had tough luck in New York the past dozen seasons or so. I blame it on my hero Jimmy Breslin, who famously interviewed the gravedigger as part of his coverage of JFK’s funeral back in 1963. And where was Clifton Pollard, the Arlington Cemetery gravedigger from?