My Incredible Year on the Lacrosse Team 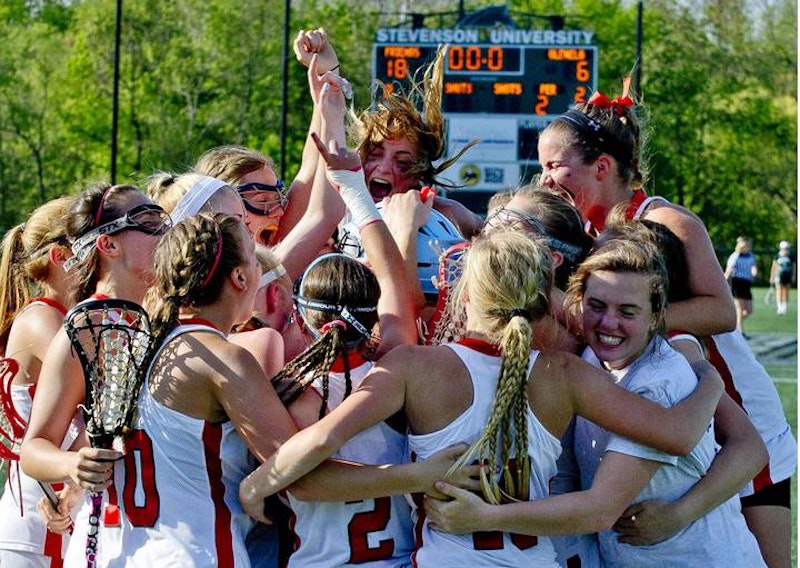 I played lacrosse because I felt like I had to. My grades sucked in the off-season, my mom made me, and because I live in Baltimore. Lacrosse was a filler sport, something I did to keep myself busy and in shape when I’m not playing field hockey, the sport I’ll pursue in college this fall. I enjoy things I’m good at and never stood out in lacrosse. So, aside from a short and scary stint on a club team, it never received much of my attention. That is, until this season.

This year, the Friends School women’s lacrosse team accomplished something notable. Our record, 17-1 and 14-1 in-conference was not unusual for the program. Despite the school’s reputation for having a weak athletic program (compared to other area schools) the women’s lacrosse team has made it to the “B” conference championships for six straight years, winning the title in three of them. The team was accustomed to the differences between conference and championship play. The seniors on the team, myself included, remember slamming Park in the finals our sophomore year then having the title stolen back by the same team our junior year. We were wary of our opponent, Glenelg Country School, whose players had never made it so far in a conference tournament. In our previous encounters with GCS (15-5 and 10-5) we were surprised by their strength and tenacity. They played the same game we did, and despite what the score might indicate, were a force to be reckoned with. Glenelg had defeated our rival Mercy, which cinched the championship our freshmen year. We approached our opponents with both respect and fear.
The game began last weekend and within a minute, the Dragons scored. We answered with a goal by freshman, Irene Lunt, a minute later and never looked back, winning 18-6.

The win felt so good because we had all contributed to the game. Lacrosse is a high-scoring game (scores average in the teens) and the players have the ability to hold the ball comfortably in their own stick. They can walk around with it, run it to goal themselves or choose the pass to a teammate. The player with the ball is not as dependent on their teammate as in other sports. Low-scoring sports like soccer and field hockey require the ball to be tapped by a foot or stick in order to maintain possession rather than in a pocket. The ball is more vulnerable and teammates are more necessary in case the player with the ball needs to dish it off quickly to avoid losing possession. I’d always found lacrosse to be a selfish sport because of this. Camaraderie seemed harder to come by on lacrosse teams than field hockey teams. The culture seemed different, more competitive. This season proved me wrong.

All our wins would include six or seven different scorers. We were more balanced and harder working than any team I’d ever been a part of. We had standout players, but never ball hogs. There was an air of mutual respect and support about this season. We were all friends. You’d be surprised about how many teams, despite countless hours on the field and in the weight room, have very little chemistry. Not us: this year, we meshed.

This season changed my opinion of lacrosse as an obligation. I now love lacrosse and the friendships I have made through it. Sports clichés aside, this was a special group. I’ve decided that Sunday’s game can’t possibly be my last. Filler sport no more, next year I plan on playing both field hockey and lacrosse.