The Thunders' Steven Adams Proves His Worth

What can't he do? 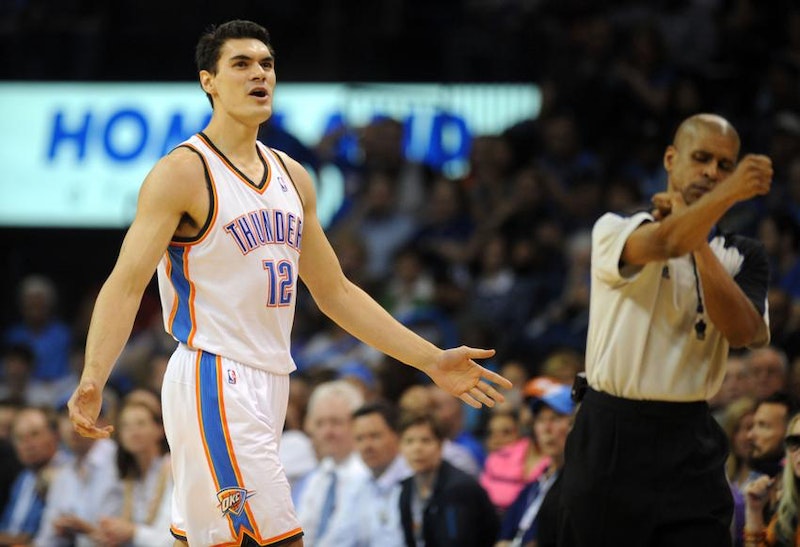 Steven Adams, 20, is the youngest of 18 children and hails from New Zealand, which meant, as he says, getting "beat up all the time for no reason." It’s said that he eats six entrees at a restaurant. This hasn’t been verified, but it adds to the growing legend. Adams doesn't wait for things to happen. He makes them happen. As Clippers coach Doc Rivers likes to say about energy guys, he plays with "force."

If you've ever watched him play, you realize that he has no fear of mixing it up. If this were hockey, he'd be Zdeno Chara, the Bruins towering defenseman. If this were football, he'd be Vince Wilfork, the Patriots defensive lineman who directs the flow of traffic in the middle. But this is basketball, which means the most physical players are often very tall and often not the most nimble.

Before the 2013 NBA Draft, Steven Adams had played one college season. He attended the University of Pittsburgh, and was about as raw as any center prospect. The Boston Celtics had the 16th pick, and were (still are) in desperate need of a center. The Celtics watched Oklahoma City take Adams with the 12th pick. They ended up moving from 16th to 13th and selected Kelly Olynyk, a sweet-shooting seven-footer who doesn't exactly intimidate on the defensive end. On the one hand, Olynyk can stretch the defense, and the Celtics envision him as a poor man’s Kevin Love; a Ryan Anderson-type stretch-four who enables great spacing for the offense. He may well become that player. It will take time, as it usually does with new draft picks. The Celtics used to have one of the best low-post defenders in the game.

Kendrick Perkins, when healthy and standing next to Kevin Garnett, provided Boston an intimidating and dominant paint presence from 2006-2010. Though he's lately been criticized for his offensive liabilities, and battled through injury-riddled seasons in the past couple of years, Perkins, as well as teammate Nick Collison, gives OKC and Steven Adams something invaluable. They are both examples of defensively-dominant role players, giving Adams practice presence and tips. Whereas Perk's wide shoulders and barrel chest, combined with his nasty streak, make him one of the best screeners and paint-defenders, Collison has the footwork and the passing. Adams can do it all.

Steven Adams is quickly showing how important he is to OKC's success.

In the first five games of the playoffs, as OKC faced Memphis, Adams played all of 21 minutes, contributing five blocks, eight fouls and a single missed shot. In Game 6 of OKC-Memphis, Adams saw 20 minutes of court time, and changed the game with five blocks. With everyone concerned about the shot-blocking of Serge Ibaka, Adams made life messy for Randolph, Gasol and company.

Against the Clippers, Adams played 17-20 effective minutes in Games 1-2, but it was Game 3 where Adams collected four offensive rebounds in 17 minutes. After a foul-plagued performance in a Game 4 loss (five fouls in 11 minutes), Adams proved his rising worth to the Thunder in Games 5 and 6. When Ibaka went down with the calf strain, OKC fans held their collective breath. The Clippers had peaked early, but it was Adams' relentless energy that stifled the Clippers attack. The 10 points and 11 rebounds were solid. But 39 minutes and only three fouls were the brightest numbers on the stat sheet.

Officiating is nearly impossible in such a physical series. Griffin and Ibaka were engaged in all kinds of judo down low. DeAndre and Perk and Adams were mixing it up nearly every possession. I'm pretty sure Griffin spent about 1/3 of his floor time getting up from the court, dusting himself off, and collecting himself.

Over the next two weeks, as the Thunder face the Spurs in the Western Conference Finals, Adams will likely see more of the spotlight. Ibaka's calf-injury may linger. San Antonio's Tiago Splitter is one of the few interior guys that will match Adams' tenacity. There will be fouls. There will be blood. There will be Adams, only 20 years old and looking like he's been in the league for five years, going after every loose ball like his life depends on it. These are the guys who deserve appreciation.

Kawhi Leonard is one of those guys, too. Except he's developed a corner three and some back-to-the basket moves, too. Kawhi, Paul George and Nic Batum are the best young two-way players in the league. Adams may never develop a jump-shot—its clear Perkins never did—but he'll be involved for a long time and Sam Presti is reaping the rewards of that 12th pick earlier than he could have imagined.