The explosive Dodger needs to play every day. 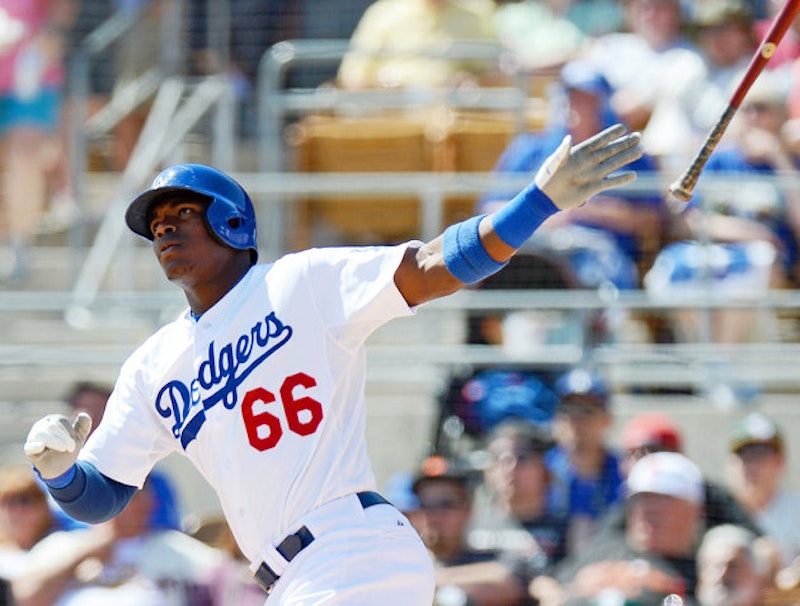 Yasiel Puig has been one of MLB's most polarizing figures since bursting onto the scene last summer. He's also been one of its best players.

The 23-year-old Cuban arrived at Chavez Ravine last June as a whirling, diving, crashing, slashing ball of athletic exuberance. We didn't know much about Puig but his immense talent was evident from the start. He hit opposite field homers with ease, made acrobatic catches (warning tracks and outfield walls be damned), exhibited a rifle arm and great speed, occasionally blundered on the base paths, and made a habit of overthrowing his cutoff man.

If you're mostly concerned with Puig's lack of fundamentals you're missing the point.

While the bat-flipping, ill-advised base running, and wild relay throws have drawn the ire of many fans and sportswriters Puig has diligently worked to improve his game. The maturation of Puig from a great talent to a great player is occurring right now and some people are still more concerned about how he catches fly balls.

I was watching a recent Giants/Dodgers game when Puig was a little too nonchalant with a fly ball. It fell for a hit and the San Francisco announcers were set to drone on with a five-minute dressing down of Puig. The very next batter sent a rocket to right field. Puig turned his back to the plate, darted towards the fence, and made a fantastic over-the-shoulder catch before crashing into the outfield wall. Diatribe halted. Inning over.

Don Mattingly, former Yankees All-Star, has the good fortune of writing Puig's name into the Dodgers' lineup. The Dodgers' outfield is crowded these days with the team locked into long-term contracts with veterans Matt Kemp, Andre Ethier, and Carl Crawford. Mattingly has done an admirable job of juggling his four outfielders but Puig has reached the point that he needs to play every day. After taking the National League by storm as a rookie Puig seemed destined for a sophomore slump. Instead he's excelled. Puig is outperforming his own lofty standards reaching base at an MVP-like .411 clip while reducing his strikeout rate and hitting with more power.

The Dodgers are languishing around .500 despite baseball's most expensive roster. The hammer could fall on Mattingly if the team doesn't experience another mid-summer resurgence like the one that saved the 2013 season. Puig's arrival kick-started last season's run and his progression should be counted on to do the same in 2014. Mattingly has a MVP candidate on his hands and should be riding that talent on a daily basis. Make Carl Crawford a very expensive pinch runner.