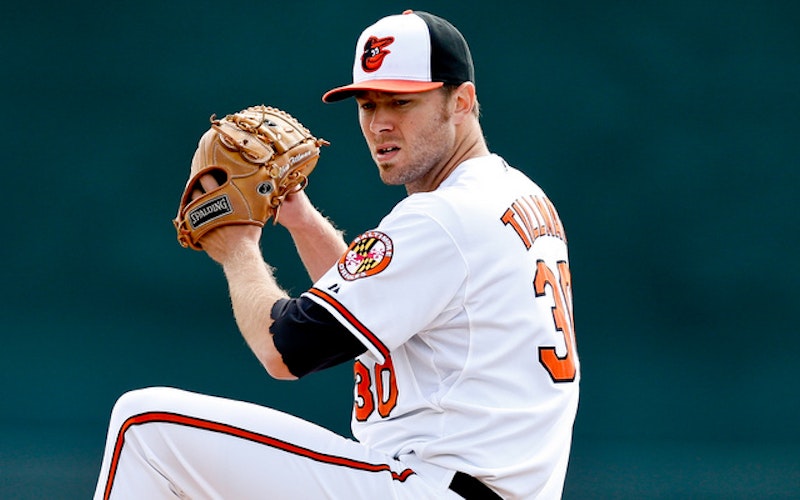 The Orioles have remained at or near the top of the surprisingly underwhelming American League East through the first six weeks of the 2014 season. The O’s have battled injuries to Chris Davis and Manny Machado, and some maddening performances by closer Tommy Hunter. As Baltimore fans wait for the ballclub’s offense to take flight the biggest head-scratcher may be the performance of putative ace Chris Tillman.

The 26-year-old righty started the season with three excellent starts, allowing just two earned runs in 21 1/3 innings of work. After walking just three batters in those first three starts the normally consistent Tillman has had trouble finding the plate. In his last five starts Tillman has walked 16 batters in just 26 1/3 innings. Tillman’s lack of command has sent his pitch counts soaring. The problem culminated in a 49-pitch first inning two weeks ago against the Pittsburgh Pirates. Tillman hasn’t pitched more than six innings in a start since mid-April.

Orioles fans are accustomed to seeing Wei-Yin Chen and Miguel Gonzalez hit the showers after five or six inning outings but Tillman was supposed to bring more to the table. Baltimore’s front office added Ubaldo Jimenez during the offseason to provide another workhorse to team with Tillman at the front of the rotation. Jimenez has rebounded from a rough April just as Tillman’s performance has hit the skids.

Earlier this week the Orioles took the drastic step of recalling top prospect Kevin Gausman from Triple-A Norfolk to make a start against the Tigers. The move was curious given Gausman’s recent bout with pneumonia and relatively limited pitch count. Gausman was predictably knocked around by Detroit before giving way to Miguel Gonzalez in the fifth inning. It was another shortened outing for a Baltimore rotation that has made a habit of taxing its bullpen counterparts.

The Orioles recall of Gausman could have been a one-start gimmick designed to avoid throwing lefty Wei-Yin Chen versus the potent Tigers. It could also have been a desperate attempt to inject another dynamic arm into a starting rotation that has been more frustrating than effective. In fact, Gausman was sent back to the minors yesterday. There’s no telling what the immediate future holds for Gausman or the rehabbing Johan Santana. Baltimore could eventually take the creative step of moving to a hybrid six-man rotation with Gausman or a healthy Santana moving into the rotation and Gonzalez serving as a long reliever/spot starter. Such a move could allow Buck Showalter to routinely give Chen, Gonzalez, and Gausman/Santana six to seven days between starts in the hope that added rest would allow them to pitch deeper into games.

The Showalter/Dan Duquette combo will no doubt get creative this season to address the team’s limited rotation but the hope has to be that Tillman rekindles the form that allowed him to go 25-10 over the past two seasons. Regardless of Santana’s recovery status or the immediate prospects for Gausman the Orioles desperately need Tillman to re-emerge as the team’s ace. Tillman and Jimenez have the ability to pitch the Orioles to the top of the division but consistency may be a season-long concern.