Anthony Rizzo and Mike Olt are the future. 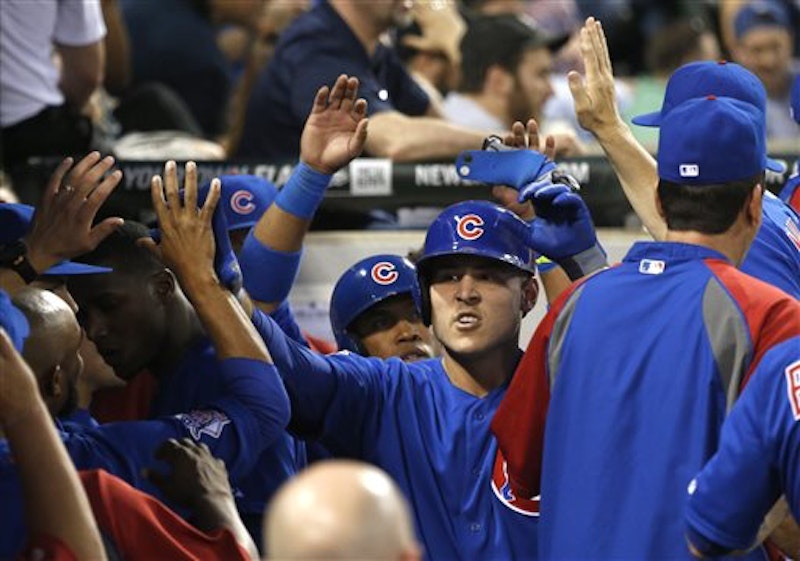 The Chicago Cubs are predictably, and by design, the worst team in the National League. The Cubs are 15-27 on the season, although their -3 run differential suggests that the team is a better than their record indicates. Of course, records don’t matter much on the Northside of Chicago these days unless you’re speaking of draft position.

The Cubs are bad. The front office pretty much told us they’d be bad, and the same is expected in 2015. And just imagine how bad they’ll be when they finally deal Jeff Samardzija to a contender for a truckload of prospects. It’s easy to dwell on the team’s dismal record and ever-shrinking payroll but it’s not all bad news in Wrigleyville.

The Cubs fired manager Dale Sveum after the 2013 season. Sveum basically served as a sacrificial lamb for a franchise in full-scale rebuilding mode, and was blamed for the poor 2013 offensive performances of young stars Anthony Rizzo and Starlin Castro. The pair was held up as tent poles of the next generation of Cubs glory but both regressed last season.

Sveum was replaced by long-time Padres coach Rick Renteria, who was lauded as a great teacher and commended for his ability to fluently speak English and Spanish. Renteria’s impact may not be showing up in the standings but Castro and Rizzo have re-emerged as a potent one-two punch in the middle of Chicago’s order.

Rizzo, the lefty swinging first baseman hit just .233 with a meager .419 slugging percentage in 2013. His struggles can partly be blamed on his low BABIP of .258. The 24-year-old has rebounded this season and has posted an impressive .850 OPS through May 19th. The biggest change in Rizzo has been his plate discipline. After striking out 127 times compared to 76 walks last season Rizzo has walked 30 times while striking out just 28 times in 42 games this season.

Castro’s 2013 season was disastrous. Not only did the young shortstop regress to the point of posting a meager .631 OPS but his continued defensive and base running lapses may have ultimately cost Sveum his job. Castro has looked like a new man this season. Since he broke into the big leagues as a 20-year-old it is easy to forget that Castro is still just 24. He's done a solid job in the cleanup spot behind Rizzo and is on pace to set career highs in doubles, home runs, and RBI.

Cubs fans can also take solace in the performance of Samardzija and fellow starter Jason Hammel. Samardzija has done nothing to hurt his trade value and his price may only go up as the trade deadline nears and contenders keep sending starters off to visit Dr. James Andrews. The Marlins, Orioles, Rangers, Yankees, Blue Jays, A's, and Mariners all figure to be in the market for a starter. Hammel signed a one-year deal with Chicago after battling injuries for the Orioles in 2013. Hammel has been outstanding for the Cubbies posting a 3.06 ERA and 0.91 WHIP through eight starts. The 31-year-old righty could be a nice consolation prize for a loser of the Samardzija sweepstakes.

The Cubs are also getting decent performances from the prospects acquired in last summer's Matt Garza trade. Mike Olt is still hitting under .200 but his power potential has started to blossom on the field and he plays a solid third base. Olt's stats have been dragged down by an unfathomably low BABIP. If Olt can get his average into the .240s he could be a controllable long-term asset. The Cubs have also received solid work in relief from rookie Neil Ramirez, as well as Justin Grimm. C.J. Edwards, the most highly regarded player in the Garza package, got off to a fast start at Double-A Tennessee but is currently sidelined with shoulder fatigue. Edwards hasn't pitched since last April but the hope is that the Cubs are just being overly cautious in resting him.