Playing Through the Pain

Can we rank sports injuries? 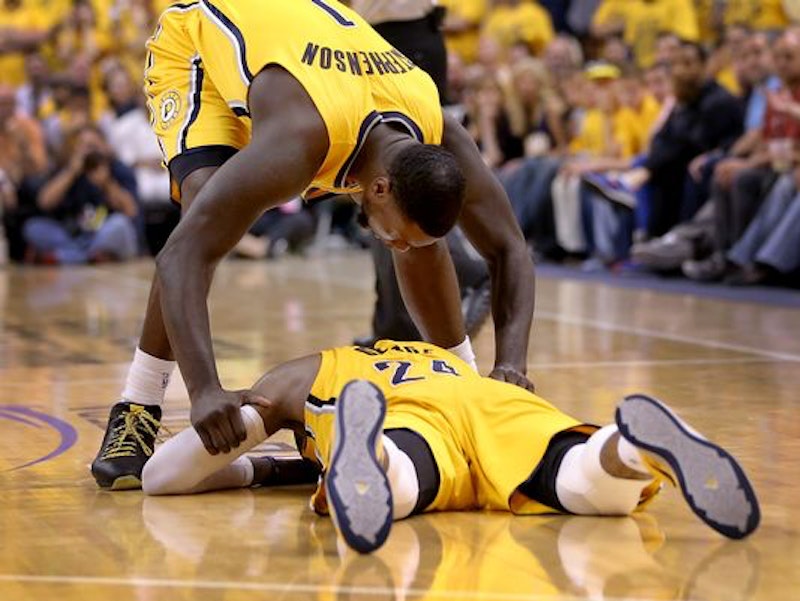 Which body part do you want to learn about today? What's more important, the head or the knee?

Most people would probably argue the head, while athletes would opt for the knee. Unless those athletes had multiple concussions. Then they might argue the head and the knee to be equally important. Sports medicine must be a burgeoning field because being a fan today means reading about the body more than ever before.

The Indiana Pacers played their best offensive basketball in months in their Game 1 dismantling of the Miami Heat last Saturday. They shared the ball beautifully, and kept the Heat from swarming and harassing them by moving the ball like San Antonio did in last year’s Finals. In Game 2, the consensus was that the Heat would defend with more urgency, as they faced a 2-0 deficit in the series. The Heat did play better basketball, holding Indiana to 21 first quarter points. The three-pointers were not wide open. The ball movement stalled behind blocked passing lanes. The jumpers began to rim-out and the Pacers were no longer getting to the charity stripe. David West and Roy Hibbert were contained.

Pacers’ wild-card Lance Stephenson has been attacking the rim with the kind of controlled abandon that Frank Vogel and Larry Bird dream of. With Stephenson's size and strength, he’s one of the few Pacers that can hope to finish those drives against Miami. Paul George is the other. What George lacks in a quick first step, he makes up for it with his dynamic length, and his soft touch.

The talk related to Miami’s championship hopes since January has revolved around Dwyane Wade's knee. Coach Erik Spoelstra and GM Pat Riley wisely decided to rest Wade for long stretches of the regular season for these very moments, and the rest seems to have paid off… so far. The series takes a break and then picks up as Games 3-7 will be played every other day. It's in Game 6 and Game 7 (again, if necessary) that Wade's knee will be tested. Unless the collision in Game 2 proves test-worthy.

Injuries play a bigger role than they ever have in sports. Will Wade's knee hold up? Was it aggravated in the collision with George? Will Paul George's concussion limit his effectiveness in Games 3 and 4? Will George even play in Game 3? Should he play in Game 3? Maybe in the regular season neither Wade nor George go after that loose ball so tenaciously. Maybe the play ends in a simple shot-clock violation or a broken play, leaving nothing else broken, or damaged. But George dove to get the ball, and Wade tripped over him. Now we have more injuries, and more limping around.

David West looked like a different player after dealing with an eye situation (poked/scratched by Norris Cole on a pick-and-roll). West, a catalyst and floor-stretching power forward, shot an ugly 5 of 16 in Game 2. Now we learn that West "won't wear goggles" for Game 2.

Major league pitchers are falling prey to ligament rehabilitation at alarming rates. The difference in the cases of basketball and baseball is that baseball pitchers actually come back stronger after their elbows are rebuilt. Rebuilding a knee has proven quite a bit trickier (just ask Amare Stoudemire and Derrick Rose). Basketball players rely on elite athleticism. Baseball pitchers rely on incredibly strong legs, shoulders, forearms, and leverage. Their mechanics are what separate the elite pitchers from the ones that never see a major league mound.

Last July, Yahoo Sports reported that 124 of MLB’s current roster of pitchers had undergone Tommy John surgery. This year, countless more starting pitchers have been taken out for the season. The longer the list of TJ-rehab projects gets, the more we learn about the long-term success of the surgery. It’s becoming as much of a preventative long-term security of health (think Jose Fernandez at age 26, five years down the road) as it is about current health. At what point does TJ become required for all 20-year-old pitchers?