Where Are All the First Round Running Backs? 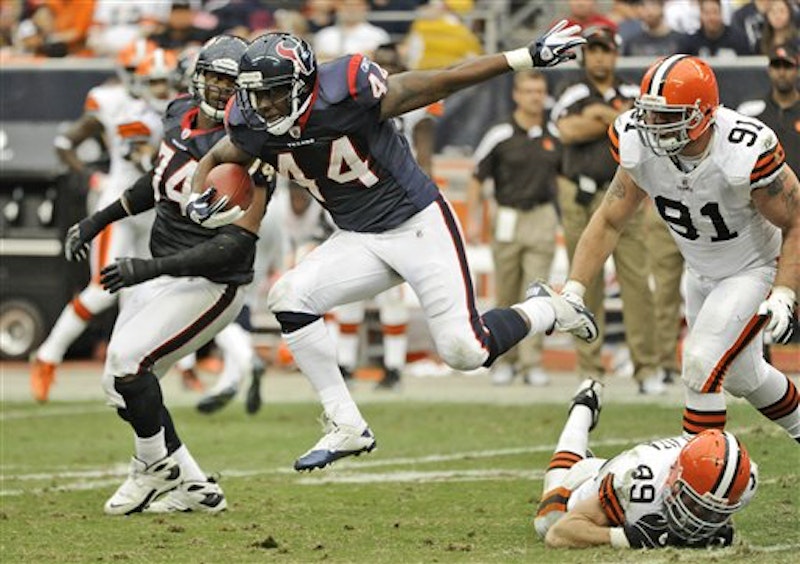 Any avid fantasy football player knows that superior running backs are the Holy Grail. If you can land a back who is not only a great runner but also a receiver you cling to him.  Fantasy footballers don't care about a running back's college pedigree, combined performance or scouting report. There are only two things that matter when it comes to running backs: opportunity and production.

NFL teams are coming around to the same line of thinking. The NFL's infatuation with the passing game, and television ratings, have rendered the running back position an afterthought in many cities. Twelve teams made the NFL playoffs (now down to eight after last weekend's games) and the leading rushers for those teams took varying journeys to the league. In most cases the leading rushers for the remaining Super Bowl hopefuls were not highly touted draft prospects or combine wonders.

In Green Bay, Detroit, and New England the running game is nothing more than an annoying distraction from their epic aerial attacks. The New Orleans Saints run the ball effectively and use their backs extensively in the passing game, but of the Saints’ four primary backs only Mark Ingram was a first round pick. Ingram rushed for just 474 yards in this his rookie season before going on Injured Reserve late in the season. Darren Sproles, who led the team with a remarkable 6.9 yards per carry and 603 yards rushing, was signed as a free agent. Sproles was originally a fourth round pick of the Chargers and spent most of his early years as a kick returner. Sproles produced 1313 yards from scrimmage and caught 86 passes in his first year as a Saint.

The Houston Texans feature the two-headed attack of Arian Foster and Ben Tate. Foster was an undrafted free agent after a star-crossed college career at Tennessee. Tate, Foster's backup, was a second round pick of the Texans in the 2010 draft. Foster has ascended from practice squad cannon fodder into one of the NFL's premium backs in less than two years. The Texans employ the famed zone-blocking scheme of Denver Broncos lore, the same tactic that converted Terrell Davis from a late round draft choice to the ultimate touchdown machine.

Baltimore Ravens leading rusher Ray Rice was a second round draft choice in the 2008 NFL draft. Rice had a standout college career at Rutgers but concern over his size (5' 8", 212 pounds) led some to believe Rice may be nothing more than a third down back in the NFL. Rice has proved all naysayers wrong. He’s been the engine that powers the Ravens offensive attack for three seasons running and at just 24 doesn't figure to slow down any time soon.

The San Francisco running game is fueled by third rounder Frank Gore. The New York Giants’ offense relies heavily on diminutive former seventh round pick Ahmad Bradshaw. The Broncos used a 2009 first round pick on Knowshon Moreno of Georgia. The oft-injured Moreno was rendered useless this season after Denver pulled Willis McGahee out of mothballs. McGahee went on to lead the Broncos in rushing. While some NFL teams have wasted first round picks and lucrative contracts over the past few years on the likes of C.J. Spiller, Ryan Matthews, Donald Brown and Beanie Wells, others have searched the waiver wire, small college practice fields, and their own depth charts to unearth the next generation of standout running backs. The fact that Ingram was the first back selected in last April's draft, and not until the 28th pick, may be a sign that the league is shifting its thought process on the evaluation and selection of running backs.

Adrian Peterson, All-Pro running back for the Vikings, suffered a terrible knee injury in week 16. Peterson was selected by Minnesota with the seventh overall pick of the 2007 draft. Toby Gerhart, Peterson's backup, suffered a knee injury in week 17, a game he started in place of the injured Peterson. Gerhart was the Vikings’ second round pick in the 2010 draft. The violent nature of the sport, and the focus on eliminating hits around the head, will continue to leave running backs susceptible to lower body injuries like the ones suffered by Peterson and Gerhart. NFL teams are now forced to carry multiple running backs with the expectation that they will be needed due to injury. Running backs are becoming a disposable commodity in the new era of the NFL. Teams don't want to use premium draft picks, or give large sums of guaranteed money to disposable players with a short shelf life. Alabama's Trent Richardson may be the only back selected in the first round of the 2012 NFL draft. Recent trends tell us he won't be drafted until the mid- to late-first round and will share carries as a rookie.