And steps out of Peyton's shadow. 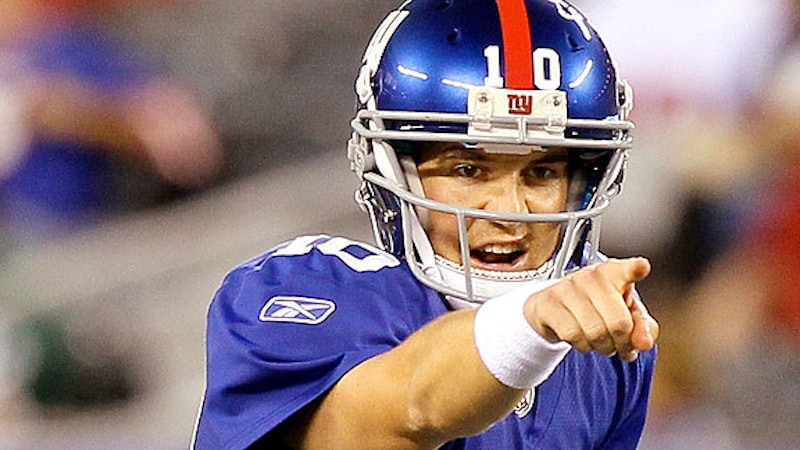 The New York Giants’ Eli Manning is a Super Bowl champion and Pro Bowler, and, not incidentally, Peyton Manning's younger brother. The little brother routine, coupled with playing in the pressure cooker of New York, has led to some undue criticism of Eli over the years. The Manning name certainly carries some benefits in football circles but there's a downside too. Despite Eli's many successes—number one pick in the draft, Super Bowl winner and a $100 million contract—he’s always played in the shadow of Peyton.

The 2011 season was a role reversal for the Manning boys. While Peyton was sidelined for the season with a neck injury Eli took the reigns and propelled himself into the discussion of the NFL's elite. The term "elite quarterback" has been trampled over the past few months. It started with the quarterback rankings by ESPN's John Clayton in which he deemed whopping 13 QBs worthy of the "elite" moniker. That kind of foolishness (Josh Freeman? Are you kidding, John? Where's Jon Kitna?) led to countless boneheaded talk radio debates about whether or not Matt Ryan, Joe Flacco and Tony Romo were "elite" quarterbacks. No, they aren't. If you have to debate their merits then they aren't elite.

Eli ranked ninth on Clayton's rankings which seemed a little low to me at the time, but is laughably low in retrospect. Clayton had Philip Rivers, Matt Ryan and Michael Vick ranked ahead of Eli. That triumvirate has as many Super Bowl appearances as I do. Ryan, after last weekend's thrashing at the hands of Eli's Giants, is still looking for his first playoff win.

Eli Manning set career highs this season in passing yardage and yards per attempt. The Giants’ once dependable ground attack of Ahmad Bradshaw and Brandon Jacobs struggled with injury and inconsistency. Eli filled the gap. Perhaps the most incredible aspect off Manning's season is the increase in his passing yardage total that went from 4002 yards in 2010 to 4933 in 2011. It’s remarkable that Manning completed just 20 more passes (339 to 359) this season than last. His yards per attempt increased almost a full yard (7.43 to 8.38). These increases are likely attributed to a few factors; Manning's continued growth as a QB, the emergence of deep threat Victor Cruz, and a reliance on the passing game to offset the often-stagnant New York rushing attack.

Last summer Eli took the bait when a radio interviewer asked if he considered himself an elite quarterback in the class of Tom Brady. Eli responded in the affirmative. To Manning's credit he didn't give a politically correct response in which he shined Brady's butt and downplayed his own accomplishments.

As the playoffs enter full swing this weekend, the Giants travel to Green Bay to face the Packer, reigning Super Bowl champions. Manning will duel Aaron Rodgers in a battle of two of the league's top five quarterbacks. Regardless of whether the Giants win or lose their franchise is in the capable hands of one of the NFL's elite, and with all due respect to John Clayton I don't use that term lightly.