Brian Cashman is stuck in the past. 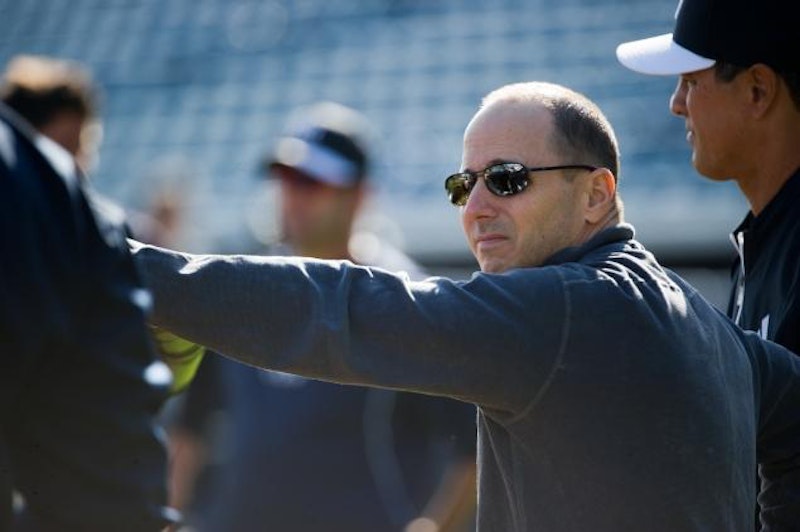 The New York Yankees have to stop these shopping sprees every time they miss the playoffs. GM Brian Cashman (or whoever’s really in charge) consoled himself with pricey free agents all winter, and now he’ll deal with the consequences for seven years. It’s kind of sad, actually: the team was so determined to hit their target weight (a payroll below the luxury tax), and they showed such willpower up until now (New York neglected to sign many big name free agents from 2010-2013).

We could look at it another way: maybe their 85-win season last year isn’t what caused this binge; maybe it wasn’t a binge at all. This could’ve been a calculated move by the Yankees, the result of years of planning. Somehow, everything worked out perfectly, and every player they wanted hit the open market at the exact same time! And maybe the Dodgers don’t regret the Adrian Gonzalez-Carl Crawford-Josh Beckett trade.

The point is: it would’ve been smarter to spread out their spending over a couple of winters if the Yankees wanted to dump $471 million on free agents. Cashman may wind up happy with a couple of the deals he inked this off-season, but just as many are likely to go sour. Brian McCann (who hasn’t had a great offensive season since 2009) admittedly does fill a hole, but Jacoby Ellsbury? Did they learn nothing from the Crawford deal? There’s a chance that Ellsbury will regain his power stroke in New York and put up another Trout-esque season, but there’s a way bigger chance he gets injured within a month and misses the rest of the season. And even if he (miraculously) stays relatively healthy over the life of the contract, who says that his power will come back? If it doesn’t, the Yanks are stuck with a center fielder who relies on his speed for both offensive and defensive purposes. Speed doesn’t age well, and his noodle arm will only get worse.

What about the three-year deal for Carlos Beltran (almost 37) who can’t field anymore? Yes, hindsight will be kind on that contract.

And then there’s Masahiro Tanaka. Part of the draw of international players is their mysteriousness. Ichiro showed that an unproven import could arrive in the majors fully formed. Big name international players usually turn into one of two things: a bargain or a costly mistake. While he won’t necessarily be the latter, Tanaka doesn’t have a chance to become the former. In total, the Yankees invested $175 million in the Japanese righty. That’s more than any pitcher has ever received in free agency. Both CC Sabathia and Zack Greinke, proven MLB stars, received less. The Yankees paid for an ace, so getting anything less will be a disappointment.

Cashman should’ve spread out this exorbitant spending over a couple of years. Instead of Tanaka, he could have signed Greinke last year, or waited for Max Scherzer to become a free agent after 2014. If he really wanted an aging outfielder, signing Torii Hunter last winter would have made more sense than the Beltran deal.

This kind of approach worked in 2009, but Sabathia, Mark Teixeira, and A.J. Burnett were more dependable than the group of guys they collected this year. And even if those contracts won them a World Series in 2009, look how they turned out. Due to the rash of extensions that teams have been handing out of late, the free agent market simply isn’t potent enough to push a team to the top of the standings. Brian Cashman is acting like it’s still 2005, and he can just buy the best players in baseball. The best players in baseball don’t make it to free agency anymore, and if Cashman wants to build a successful ball club going forward, he needs to reinvent his style.