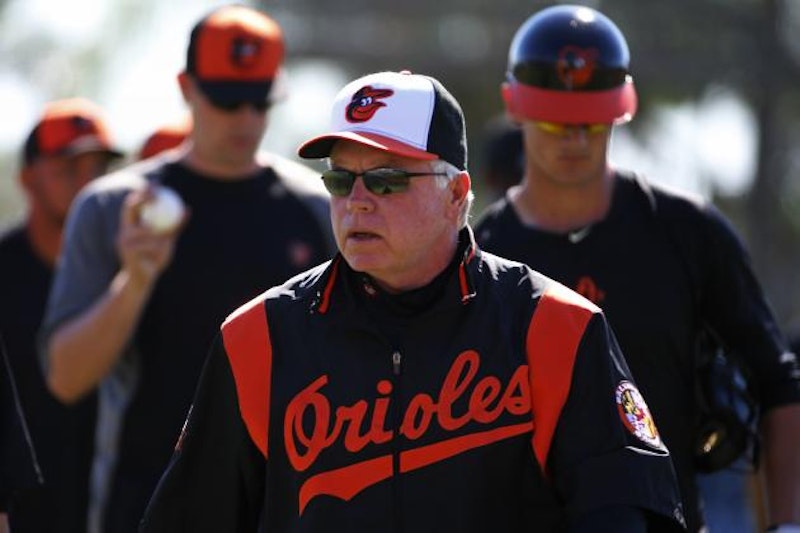 Jimenez rounds out a starting rotation that will include Chris Tillman, Wei-Yin Chen, Miguel Gonzalez, and Bud Norris. Kevin Gausman, the team's top prospect, was once assumed to be a candidate to be the fifth starter but now figures to begin the season at Triple-A Norfolk. Gausman is the team's top standby starter in the event of injury or further struggles from Bud Norris. The Orioles also added veteran lefty Johan Santana on a minor league deal. The former Cy Young winner is rehabbing from injury and may not be ready to pitch for another few months. The Jimenez and Santana deals created a ripple effect in the pitching depth at the top of the organization. With Gausman slated to begin the season in the minors, and Dylan Bundy expected to pitch at some point this summer, the Orioles can let both youngsters develop at their own pace.

The health of Santana could create a logjam of lefty relievers in the very near future. Zach Britton, considered a top prospect as recently as 2012, has struggled in recent big league duty and is out of options. The 25-game suspension of Troy Patton to start the season, coupled with Britton’s strong spring, all but assures that Britton will be in Baltimore on Opening Day. Britton will probably be joined by Brian Matusz, another failed starter, in the O’s bullpen. Matusz has been pitching extended innings in the spring and may be the subject of some showcasing by the Orioles’ brass. When Patton is ready to return to the active roster, the team will need to make a move involving one of the lefthanders. A healthy Johan Santana come June or July could further complicate things in a best-case scenario sort of way.

The Nelson Cruz signing all but ensures that the recently acquired David Lough will be the Orioles primary left fielder. Lough was thought to be battling the likes of Urrutia, Reimold, and Pearce for time in left field with Delmon Young serving as the team's primary DH. Lough's superior defensive and base-running skills make him a suitable successor to Nate McLouth in the outfield and possibly at the top of the batting order. Showalter could carry 13 pitchers to start the season meaning he’s be saddled with a three-man bench to begin the season. The status of Manny Machado is still undetermined but at this point it appears unlikely that Machado will be ready for Opening Day. If the O’s wisely err on the side of caution with Machado it could open up an opportunity for rookies Jon Schoop or Michael Almanzar. Schoop is considered to be the ball club’s second baseman of the future and he’s been raking fastballs all spring. There’s a chance that Schoop makes the team out of Spring Training with Ryan Flaherty filling in at third base in Machado’s absence. Such a scenario would give Showalter and GM Dan Duquette a couple of weeks to evaluate Schoop’s performance and determine whether or not he is ready for a full big league season and whether or not it is worth starting his arbitration service time clock a bit earlier than planned.

The potential for a three-man bench makes Rule 5 draft pick Michael Almanzar a long-shot to make the Opening Day roster. If Showalter keeps just three bench players, and carries forward with his stated plan of starting Cruz in left field versus left-handed hurlers, it would mean that one of the bench spots would be reserved for a right-handed hitting option at designated hitter. Veterans Pearce and Young are battling for that spot, with Pearce given the edge for his defense and versatility. Almanzar, drafted after a solid season at Double-A for the Red Sox in 2013, has shown impressive batting practice power and chipped in three doubles and a home run in Grapefruit League action. If Almanzar doesn’t make the Opening Day roster he must be offered back to the Red Sox. Duquette and Showalter have found roster spots for Rule 5 picks Ryan Flaherty and T.J. McFarland over the past two seasons. It wouldn’t be a shock to see Almanzar squeezed onto the Opening Day roster given his raw ability and the organization’s paucity of young power hitters.