Spring Injuries Could Be Cubs' Gain 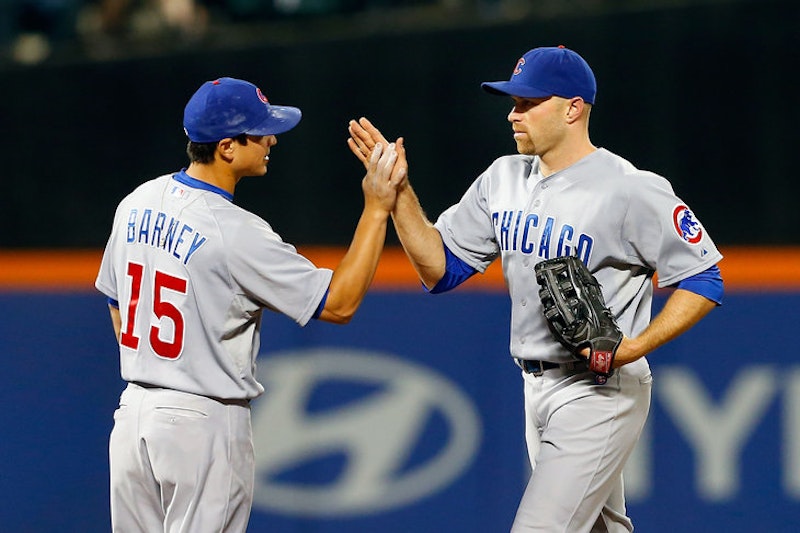 The injuries to talented Major League pitchers continue to mount. There’s more than a week left before Opening Day but the Atlanta Braves, Arizona Diamondbacks, and Oakland A’s have already suffered potentially catastrophic losses to their respective starting rotations. The Detroit Tigers have pitching to burn but lineup losses have the AL Central favorites reeling. Those recently damaged contenders may come calling on the rebuilding Cubs for reinforcements as soon as they get off the phone with Dr. James Andrews.

The 2014 Chicago Cubs may have already peaked thanks in large part to Javier Baez’s near-daily dose of long balls. Fans are more excited by the 100th anniversary celebration of Wrigley Field and the potential debuts of Baez and company than by anything presently featured on the big league roster. Despite the Cubs’ recent woeful performances and low expectations the team does have several useful veterans that could help out an ailing contender.

The Cubs have been unable, or perhaps unmotivated, to sign right-hander Jeff Samardzija to a long-term contract—he’s under team control through the 2015 season. With Anthony Rizzo and Starlin Castro already inked to extensions Samardzija is Chicago’s most marketable and available trade commodity currently on the big league roster. The team fielded offers for Samardzija during the offseason and figures to field additional calls in the coming days.

The Braves were hit with the double whammy of losing both Kris Medlen and Brandon Beachy to Tommy John surgery during Spring Training. The team had the financial resources to ink Ervin Santana to a one-year deal to replace Medlen but there are no free agents available to sub for Beachy. Samardzija would cost the Braves, or any suitor, a package of three or four highly regarded prospects which may be even more difficult to part with than the $14 million they handed over to Santana.

The A’s and Diamondbacks are in the same spot as Atlanta. Both teams positioned themselves as contenders but the losses of Jarrod Parker and Patrick Corbin to Tommy have cast serious doubt on those hopes. The acquisition of Samardzija, either now or at the trade deadline, could rescue the playoff chances of any of the teams mentioned above. The Cubs can be patient with Samardzija given his two remaining years of arbitration. If Theo Epstein and company don’t find a prospect-laden deal to their liking now they’ll simply wait and put the big righty back on the auction block in July, or perhaps again next winter.

The Detroit Tigers remain one of the American League’s best teams but the recent injuries to Jose Iglesias (shins) and Andy Dirks (back surgery) have thrown a wrench into one of baseball’s most talented lineups. Iglesias provided stellar defense for Detroit after being acquired from Boston last summer, but the young shortstop is now expected to miss at least four months of the season. The Tigers are reportedly talking to the Cubs, who could offer Darwin Barney and Nate Schierholtz to fill the Tigers’ holes at short and in the outfield. The Tigers are short on upper level prospects, which is one of the reasons they dealt Doug Fister to Washington for several young players, but the cost in prospects for Barney and Schierholtz would be relatively low and could provide a major impact. Barney came through Chicago’s minor league system as a shortstop but has established himself as one of baseball’s best defensive second baseman over the past several seasons. Barney has played a lot of shortstop this spring as Starlin Castro battles an injury of his own. Perhaps he’s played enough to impress the Tigers.