The Week in Fights #9 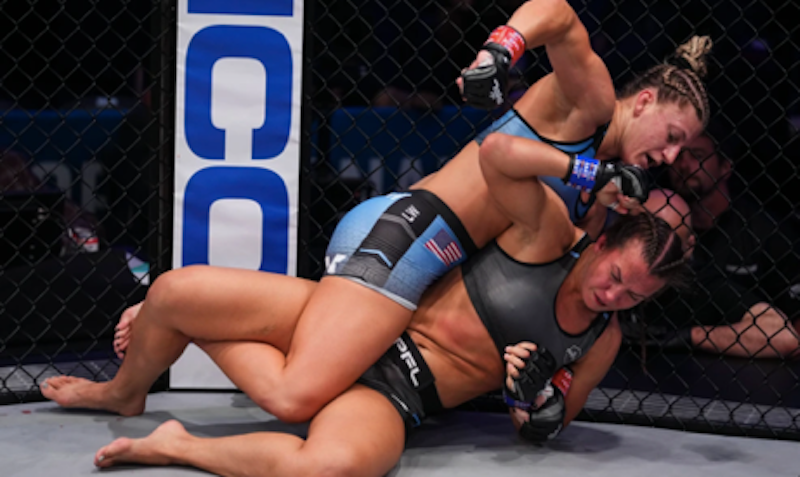 You can’t win them all, goes the old saying. And for some unfortunates, you can’t win any of them, ever. You could replay a particular fight a million times or a million billion times, and the result, like the song, would always remain the same. That’s how it went last week for Kaitlin Young and Max Holloway—a tough-as-nail veteran of the pioneer days of women’s MMA and a former men’s featherweight GOAT. All that talent, that experience, and… nada. The big sleep. The black lights. Proud faces turned into hamburger.

Kayla Harrison defeats Kaitlin Young by TKO (round 1), PFL 6: Poor Kaitlin Young. The 36-year-old “Striking Viking” has been in the pro fight game since 2007, the year I graduated from law school, and during that span she’s won 12 fights, lost 13, and gone to a draw once (she would lose that rematch). These journeyman records, laden with more losses than wins, are common on the women’s side of the sport, where one might encounter a female fighter getting her first UFC fight as a fill-in while sporting a record along the lines of 2-4 or 3-6. Even above-average fighters such as Young or tough grappler Sijara Eubanks fight enough good opponents in the very small world of women’s MMA that they eventually bottom out at .500—or below.

Young, who has lost to Liz Carmouche, Lauren Murphy, Leslie Smith, Julia Budd, Julie Kedzie, Miesha Tate, and even controversial, long-retired Gina Carano, bottomed out in this particular fight by winding up in the bottom position under gold medal-winning judoka Kayla Harrison, the only massively-muscled woman in the 155-pound division outside of the stout Marina Mokhnatkina (who took Harrison the distance in their PFL 3 bout, a rare feat) and the aging and increasingly inflexible Julia Budd. Budd, in fact, was the scheduled opponent for this fight, but withdrew due to injury. Budd-Harrison would have at least been a somewhat interesting fight, perhaps another 15-minute tactical snoozer along the lines of Mokhnatkina-Harrison, with Budd spending most of her time clinched against the cage and Harrison throwing patty-cake punches at her ribs.

In this case, short-notice fighter Young, who has fought at 135 pounds and should surely stay there, arrived with a noticeable spare tire around her waist and the same desire to “mix it up” that all no-luck veterans with a “puncher’s chance” attempt to utilize against superior opposition. She’d barely touched Harrison with her Thai boxing strikes before the two-time PFL champion tossed Young to the ground and began beating her into submission.

What a career Harrison has had! She’s already racked up two million dollars in PFL grand prizes fighting the MMA equivalents of Punch-Out!! jobbers Glass Joe and Von Kaiser. 155 pounds sounds like a great idea—neither Bellator nor the UFC has this weight class—but the talent pool is shallow, meaning Harrison mostly beats up overstuffed flyweights, bantamweights, and featherweights. The whole thing is a wonderful spectacle for yours truly, since I want to watch the biggest men and women fight—people with some size on them, some thickness to them. Harrison’s third overall victory and third million-dollar check are preordained even in the face of a rematch with the seemingly roided-up Larissa Pacheco, whose hands are heavier and voice is deeper than ever before. The whole thing is a lot of pointless fun, a splendid way to waste an evening.

Alexander Volkanovski defeats Max Holloway by unanimous decision, UFC 276: About Volkanovski and Holloway little else can be said. They’ve now fought three times, and Volkanovski won every fight. People thought that Holloway—who’s never been finished by knockout in his entire MMA career and submitted only once, in 2012 by a young Dustin Poirier—won the second bout, but I wasn’t having it. Volkanovski, who’s good anywhere a fight goes, pulled away in the later rounds of that second bout with his wrestling, which he then used to ground-and-pound skilled contender Brian Ortega in his subsequent title defense.

Starting with the Ortega beatdown, in which Volkanovski overcame a few tense moments when his foe was chasing submissions, the Australian fighter has turned on something akin to “God Mode.” I assumed that the outcome of his next bout, against long-time featherweight bridesmaid Chan Sung Jung, proved only  that the “Korean Zombie” had finally passed his stale date, so great was the speed difference between the two… but then the third Holloway fight occurred, and Volkanovski looked like he had gotten even faster.

This time around, Volkanovski beat Holloway to the punch. In fact, he beat him to every single punch. In the first round, the shorter fighter recognized how much quicker he was and began taunting his rival. Holloway’s skills were on point—the pace and pressure, the unwillingness to so much as accept even a single knockdown, the ability to endure untold amounts of punishment while moving forward—yet it was for naught. Even Dustin Poirier, in their rematch at 155, didn’t batter Holloway this badly en route to a decision win. No, this was special. Volkanovski moved with video game speed, his legs like springs, his small body—which somehow supported 200+ pounds during his Greco-Roman wrestling and professional rugby days—almost vanishing into thin air whenever Holloway threw a punch, only to re-materialize a few inches away from the blow. It didn’t make sense.

Holloway had set a significant strikes-landed record (744) when he obliterated Calvin Kattar in January 2021, then followed that stellar performance with a close yet still decisive victory over Yair Rodriguez. Rodriguez, who owned a win over the “Korean Zombie,” and Kattar, who had beaten Dan Ige and would go on to stop the rapid rise of Georgian kickboxer Giga Chikadze, represented the cream of the crop in the featherweight division. Holloway had found another level. He too had supposedly unlocked “God Mode.”

Only he hadn’t; he was still human, all too human. Holloway’s only 30 and still has a few more good years ahead of him—this in spite of a career that has spanned 12 years and 30 fights, all but four of them big-ticket affairs in the UFC. And it’s possible he was better than the versions of Max Holloway he brought into previous fights against Volkanovski. Yet he couldn’t have beaten Volkanovski with anything short of a cattle prod or a sawed-off shotgun.

How sad to reach this state, to be perhaps the best you’ve ever been and yet be as thoroughly outclassed as anyone on the UFC 276 card! Almost as outclassed as poor Kaitlin Young, in the cage since 2007, pressed under Kayla Harrison’s mighty bulk and unable to do a god-damned thing.

Because of this, the fight game is the cruelest of all the sports, and thus the most compelling. Do you remember what it was like to fight against your father at age 12, only to have him rip the firearm you were brandishing from your hand like it was a water pistol? Do you remember what it was like to bench press 365 pounds to competition standards at a powerlifting meet where someone else benched 575 pounds, and that 575—as impossible as it sounds, as impossible as it feels in a body that has moved heavy weights for 25 years—isn’t even within 200 pounds of the current world record? The fight game lets you vicariously experience this strange agony, this curious ecstasy, over and over… to be so prepared to win only to fail, to give everything and see that amount to nothing, to not only lose but experience the eternal recurrence that accompanies such a loss: were this event replayed eternally, you’d always lose, forever and ever amen.