Miesha Tate reaches the end of the line. 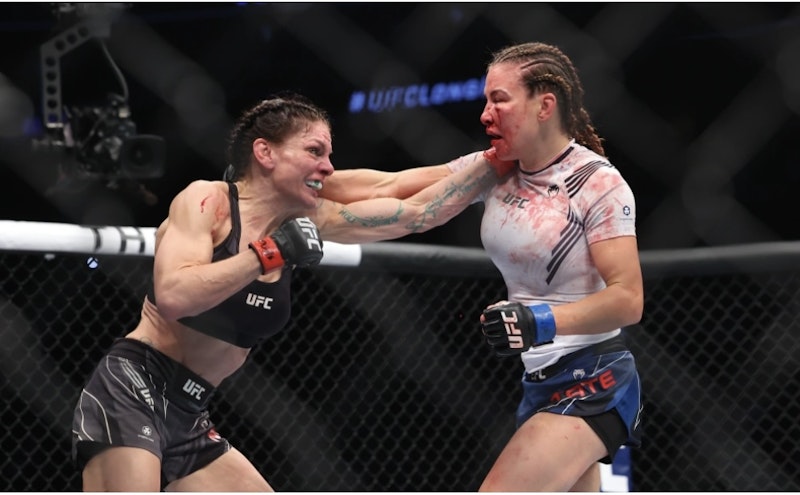 At last week’s UFC Fight Night, former Strikeforce and UFC women’s champion Miesha Tate found herself on the losing end of a unanimous decision against long-time contender “Lucky” Lauren Murphy. This was a result I hadn’t anticipated, given the musclebound Murphy’s disappointing loss to women’s flyweight GOAT Valentina Shevchenko at UFC 266 and my assumption that longtime bantamweight Tate would be much stronger at 125 pounds. “Cupcake,” after all, had always been a surprisingly strong wrestler and grappler at 135 pounds, even holding her own against Olympic freestyle wrestling silver medalist Sara McMann and judo bronze medalist Ronda Rousey. Not only that, but the 35-year-old Tate was three years younger than Murphy, whose weight cut appears to be so agonizing she might as well be 68 when she enters the cage.

As is the case with most MMA analysis, nobody, myself included, knows a thing. “Lucky” Murphy, who was anything but lucky against top-tier competitors such as Katlyn “Blondefighter” Chookagian, Sara McMann, and current Bellator women’s flyweight queen Liz Carmouche during her own run at bantamweight, transitioned to 125 pounds nearly a half-decade ago and was clearly the stronger fighter at that weight. Tate’s entries on her takedowns weren’t terrible—not textbook, to be sure, but nothing has been textbook in a career where her biggest wins were usually of the comeback variety, as when she choked out then-bantamweight champion (and recent Ronda Rousey vanquisher) Holly Holm in the final round of a closely-contested scrap at UFC 196. But to Murphy, whose body has grown increasingly sinewy with age—all right angles and corded, veiny muscles—Tate’s takedowns and clinches were akin to the swats of a gnat against the loins of a giant, able to be overcome with the application of leverage and brute strength.

This was a rough outing for Tate, who was never close to being finished but far less successful in the fight than she had been in her previous outing at bantamweight, where she lost a close five-round to Ketlen Vieira due to the latter’s more impactful strikes. Murphy not only battered “Cupcake” from pillar to post—mashing up a face that shows damage as quickly as any in the UFC in the process—she took down the former champion on two occasions. Tate had her moments, managing some decent strikes in the clinch, but she looked undersized and under-trained next to an older woman who had, despite a career that has lasted nearly as long as Tate’s 15-year run, managed to eventually become the more modern and well-rounded fighter.

This is undoubtedly a bitter pill to swallow for Tate, as she was always a joy to watch in the early-2010s for this reason—she mixed the martial arts in a time of specialists like pure strikers Gina Carano and Holly Holm, judoka Ronda Rousey, and wrestler Cat Zingano. Tate was never the greatest fighter in any one area, but she was clever and hard to knock out—only Zingano among all her opponents has finished her with strikes, though Tate contended the stoppage was premature—and always found something extra when it counted. Against Lauren Murphy, the roles were reversed. Tate was the shirt-clad veteran punching the clock and surviving her rounds, and Murphy, though older, clearly “wanted it more,” as writers say when they run out of ways to explain why one fighter beat the stuffing out of another.

Whither, then, goes “Cupcake” Tate? Probably nowhere fast, though it seems she’s enjoying her return from retirement and acquitting herself well in the fights. Her stamina and conditioning seem good, even if her strength is lacking, and she could probably drag any match to a decision against any opponent, even the suddenly mortal “Bullet” Shevchenko. But would she want to do this? I can’t imagine why anyone would, but then again, 43-year-old Andrei Arlovski rebounded from his last run as a serious contender—ended by four straight losses by finish against top stars such as Alistair Overeem and Stipe Miocic—to become a dangerous gatekeeper of the heavyweight division’s top 15 rankings, earning solid paychecks to eke out decision victories against a host of free-swinging fat boys and one-dimensional former football players.

Even as Tate perhaps ponders following in Arlovski’s footsteps, “Lucky” Murphy can progress toward one final title challenge. Her showing against Shevchenko was so dismal that a shot at the flyweight belt is likely a fight or two away, but it might behoove the UFC to rematch her against perennial contender “Blondefighter” Chookagian, this time at 125 pounds. Although Chookagian’s skills are arguably the most well-rounded in the flyweight division—she’s a little bit above average, like the kids who populated disgraced commentator Garrison Keillor’s once-beloved Lake Wobegon—she too might struggle if Murphy brings to bear the same strength she used to control Tate.

On a personal level, Tate-Murphy was the sort of fight that gripped me because its central story was about two athletes growing old, two careers going in different directions. As age challenges me in some ways, and as I overcome its ravages in others, my attention is drawn to these veteran-against-veteran matchups. How much do these two have left in the tank, I wonder. How much do any of us?