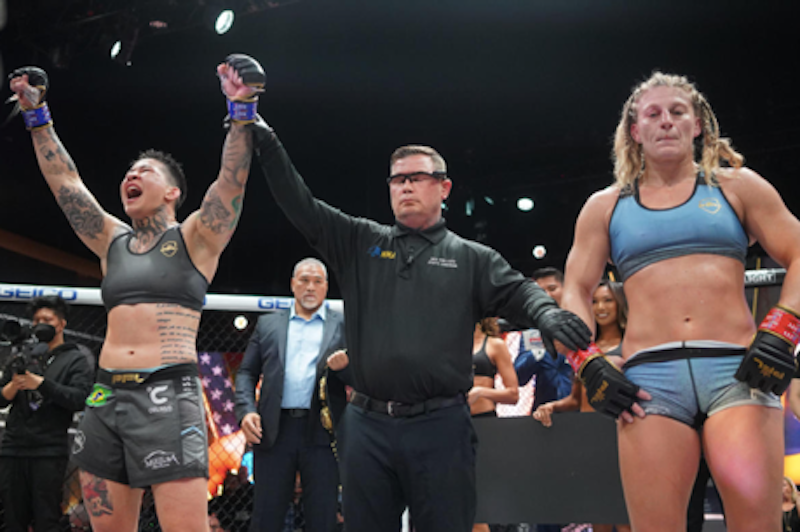 Kayla Harrison, surely the greatest women’s Olympian to deign to step into the MMA cage, washed up in five rounds at last Friday’s PFL finals. Twice a gold medalist judoka, prevailing in the massive 78-kg class at London in 2012 and then again at Rio in 2016, Harrison was better—and considerably bigger—than her obvious forebear Ronda Rousey, the bronze medalist judoka who supposedly started it all (she didn’t; the since-canceled Gina Carano did, but history is written by the winners and Carano lost to Cris Cyborg when it counted).

Like Rousey before her, Kayla Harrison had a good thing going. In the women’s lightweight class (155 pounds), arguably the shallowest talent pool in professional sports, Harrison needed only to win four lay-and-pray bouts a year to secure the $1 million prize that the PFL is somehow able to award all of its winners. Trip the opponent, land in half guard, and then throw some patty-cake punches at their head. She did that in 2019 and 2021, buzz-sawing the opposition without really expanding her skill set. Unlike Rousey, who fell in love with striking and then got plastered on her hasty retreat from the sport, Harrison stuck with the bread and butter. She didn’t change horses in midstream. She danced with the one who brought her. And so on.

Along the way, she twice licked a Brazilian fighter named Larissa Pacheco. These were boring decision wins, but definitive wins nonetheless—Harrison could trip and hold down Pacheco, if nothing else. Pacheco, cold-cocked by eventual The Ultimate Fighter 28 winner Macy Chiasson back in 2018, didn’t look like much on that iteration of the reality show, which was intended to fill the UFC’s lagging 145-pound weight class (it didn’t; women’s featherweight is still a disaster piece). She had a soft belly and jiggly, pipe-cleaner arms, and the considerably taller Chiasson, who has had an up-and-down career in the UFC, beat her like a bass drum. A few years before that, in a brief UFC stint, kickboxer Germaine de Randamie knocked her out and Jéssica Andrade—then a 135-pound, mini-me version of what Pacheco looks like now—submitted her with a guillotine choke.

The decade-long story of Larissa Pacheco, though, is one of extraordinary persistence. It’s probably also a story of better living through chemistry, as it has been for so many Brazilian fighters who started out looking one way and came into their own looking another. Vitor Belfort, Paulo Costa, and legions of lesser lights too numerous to name (I’ll name one, though—Michel Prazeres) all got on the gas and radically altered their bodies. Pacheco hasn’t failed a drug test, so who can say? But she certainly failed my eyeball test, and I’ve been studying steroid bodies for a long time. It’s a considerable aesthetic improvement, to be sure: a bull neck, better abdominal definition at a heavier weight, thicker arms, and cinder-block legs.

Pacheco, however, wasn’t beefing up to run some sort of Liver King grift. She didn’t need to look strong; she needed to be strong. And for nearly five rounds, she out-muscled Kayla Harrison at every turn. She also pounded Harrison, which she had almost been able to do in their second fight, because Harrison could no longer stop her striking. Last time, Harrison had employed judicious takedowns to mitigate Pacheco’s strikes; this time, she used her chin, which proved surprisingly durable.

The thing about Harrison, who raises her niece and nephew and recently campaigned for victorious Florida governor “Corona” Ron DeSantis alongside fellow fighters Andrei Arlovski and Jorge Masvidal, is that she’s a level-headed, god-fearing woman who would’ve put her third $1 million check to good use. Would she even need to go to the UFC and cut to 145 or book a superfight with Bellator’s Cris Cyborg (Cyborg no longer wants to fight her, for obvious reasons)? She could continue winning these easy-mode tournaments for as long as the PFL—which improbably staged their annual championship card as a pay-per-view to the delight of those 500-1000 inveterate, degenerate gamblers willing to pay $49.95 to see how the lines were swinging from round—keeps its cage doors open.

Only she couldn’t win, even when she was giving it her all, even when she wasn’t crumbling in the face of strikes. She didn’t go down like Ronda Rousey, whose destiny was the scripted WWE from the moment Holly Holm first turned on her black lights. Harrison fought hard and kept grinding her way to takedowns. But she couldn’t keep Pacheco in place, could barely handle Pacheco’s submissions off the ground, and couldn’t hurt her with those trademark patty-cake punches. Harrison was strong and well-conditioned, and she fought to the end. Yet it didn’t mean a thing against Pacheco, who already possessed the basic skills needed to beat Harrison—she knew this after their second fight—and merely had to do the work of getting some size on her.

“I know that I live my life out loud and the consequence of that is to be seen and to be humbled… I’m beyond upset about losing,” Harrison wrote on her Instagram, in a caption that appears beneath a photo of herself with those sweet kiddos she’s raising, a photo in which she looks like the spitting image of someone’s old aunt. “I can’t ever really describe to you how it will haunt me.” In spite of that, Harrison reaffirmed that “God is good all the time… not when it’s good… not when it’s bad… he’s just always there.”

By that fifth round, Kayla Harrison—who’d recently adopted a Rousey-lite tough-girl attitude, calling herself the “queen” and so forth, to sell these boring, unsellable fights—surely understood that God had his plans and she had hers. The queen would not reascend her throne. The two-time Olympic gold medalist would remain a two-time PFL tournament winner. “I am not ashamed,” she wrote. “It’s going to be ok.”

And Larissa Pacheco? Money aside, one is left to wonder how happy she is. Between her 2018 Ultimate Fighter appearance and this 2022 PFL triumph, her voice dropped several octaves. Her countrymen flocked to her Instagram profile in the wake of her victory, not to praise her but to criticize her sexual identity— she’s openly gay—and denigrate her changed appearance. Hers is yet another haphazard fighter’s highway leading to nowhere in particular, filled with more sadness and disappointment than most would suspect. Perhaps she’ll turn up in the UFC and lose again to Chiasson, fellow Brazilian Norma Dumont, or someone else of that caliber. Perhaps she can’t, because she’s now too dense to cut to 145. Perhaps she’ll merely try to win the PFL again. It’s not as easy as it looks, something past champions, even repeaters like featherweight wrestler Lance Palmer, have learned. Time and everyone else is gaining on you. Pacheco is 28 yet has been fighting for a decade. Harrison is 32 going on 50. History’s neutral, but the storm we call progress is not; last year’s models pile up in a big shit heap while the rest of us, living and dying one day at a time, are propelled inexorably into the future.