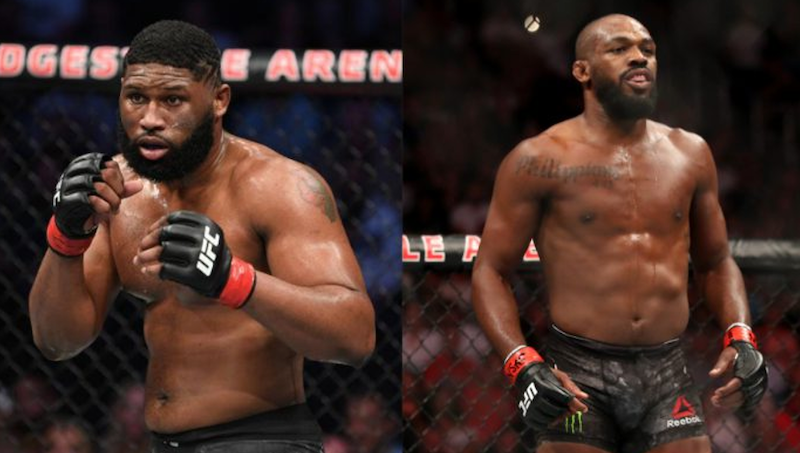 You’re Jon Jones, 35, soon to be a main-event heavyweight. You were the greatest light heavyweight champion of your time, a time that passed after you struggled to decision a wounded Thiago Santos and a point-fighting Dominick Reyes. Now you’re trapped by a fight racket that you conquered between 2008 and 2016, before all the troubles started. You always fought for money, and you’re still talking about making a living the only way you know. It was there, all you needed, a career $14 million in earnings. How much have you kept? Your younger brother Chandler, the Arizona Cardinals All-Pro defensive end out of Syracuse, has racked up 108 sacks and $100-plus million in the NFL; he’s the real star of a family in which your older brother Arthur, also an NFL defensive lineman and a Syracuse alum, out-earned you sitting on the bench. The sums don’t matter, and what you did with it is no one’s business but your own. We know the court system in the United States isn’t cheap.

You knew you were finished at light heavyweight. You knew it first. You understand what happened to you better than anything. You’re the guy avoiding the punches and winning the rounds. You share everything in the fight racket with UFC impresario Dana White but the punches. Only your sparring partners and opponents share the pain. Dana will never give you a contract that entitles him to a percentage of the blows. That’s your problem. You don’t have to rely on an agent to guarantee you the right to absorb patty-cake punches from the likes of Alexander Gustafsson or Dominick Reyes. It doesn’t look like either of those guys was an elite fighter, by the way, but we didn’t know at the time. The real monsters, the Magomed Ankalaevs and Jailton Almeidas, are rising through the ranks right now.

A lot of your reputation hinges on how well you handled Daniel Cormier, the porcine Olympian. The state of him today, with his fat belly bulging out of his button-down shirts! The second time you beat him and took back what was yours—what he never truly was—which was the light heavyweight championship. A positive test for a turinabol metabolite took it away again. Whenever you traded barbs with Cormier, you never called him champ. He wasn’t the champ. You were. Once you squashed an undersized Maurício Rua, deprived of his beloved soccer kicks by those draconian UFC rules, there were only ex-champs at 205 pounds.

You must’ve noticed the night in 2020 when Dominick Reyes out-struck you 116-104 over five rounds. Neither of you is the champion right now. In Reyes’ case, it’s for good reason. As Warren Zevon sang of Ray “Boom Boom” Mancini decades ago, “If you can’t take the punches, it don’t mean a thing.” After losing two bloody brawls to Eastern Europe’s finest in Jan Błachowicz and Jiří Procházka, Reyes couldn’t take even one jab from the enigmatic man-mountain that is Ryan Spann.

You’re coming up to heavyweight now, the last resort of good fighters too tired to cut the extra pounds. Survey the MMA press today. What are those hacks writing about? Recently it’s the idea of you fighting Curtis Blaydes, who’s good at everything except taking punches from Derrick Lewis and Francis Ngannou. I wouldn’t like your chances with those two bruisers, either. But mostly the hacks write about the people who are moving the needle in 2022—Leon Edwards, Alex Pereira, Khamzat Chimaev, Islam Makachev, the aforementioned Jiří Procházka, and Ciryl Gane. These are the players nowadays, the names on all the lips in a sport so resignedly minor league that vanishingly few names are on anyone’s lips.

You look back and the past belongs to you. For eight years, there was nobody like you. You were a fighter, not a symbol; a flawed man, not a paragon. At your best, you obliterated an entire generation of rising stars and old pros: Ryan Bader, Brandon Vera, Rampage Jackson, Lyoto Machida, Chael Sonnen, Vitor Belfort, Rashad Evans. You finished all the names on that list except for Evans, and poor, undersized “Suga”—the heavyweight winner of The Ultimate Fighter 2, if you can believe it—looked as bad as any of them. You never got to fight Anthony “Rumble” Johnson, who might’ve knocked you out, but that wasn’t your fault.

Then came your legal problems. A hit-and-run conviction in 2015 when you crashed your rental car into two vehicles, one of which was driven by a pregnant woman. That was a felony and it cost you the title for the first time. “Got a lot of soul searching to do,” you tweeted not long thereafter, then served your 18 months of probation. In 2019, there was a battery charge brought by a cocktail waitress in a strip club, to which you pled no contest. A domestic battery charge in 2021 when you were fighting with your fiancée, swelled into a felony after you got belligerent with the police, headbutting the hood of their patrol vehicle to prove a point. Four days after that arrest, you posted an Instagram video of yourself lifting weights, with the caption promising you’d never touch the sauce again. You’ve hit the sauce a lot; it hits back a lot harder than hapless Matt Hamilll or pillow-fisted Vladimir “The Janitor” Matyushenko.

You pocketed those 14 million bucks in fight purses and probably a bit more in endorsements, but that’s been cut many ways, like the cocaine for which you tested positive a month before your UFC 182 beatdown of Daniel Cormier. Judging from your social media, where you’re always surrounded by sparring partners and trainers, you’re probably only ever alone when the bell rings or when you’ve passed out asleep in your car. How much is left? You’re chasing that $10 million fight, but you won’t get it if you fight Curtis Blaydes, a star junior college wrestler like yourself as well as a soft-spoken, charisma-free man who has at least 30 pounds on you along with active hips wide enough to birth octuplets. He’s a lay-and-pray behemoth with a gas tank that’s probably twice the capacity of yours, not a needle mover.

Last time, you quit when you were still winning. You finished with the 205-pound title around your waist. A lot of people think Reyes beat you, but he didn’t. Wasn’t that enough? Probably not; we all have dues, and bills, to pay. It embarrassed me to watch Reyes touch you up, because you were the guy who didn’t get touched, the guy who took down Cormier three times. Nobody else could do that. But even that victory wasn’t sufficient. Cormier ran to the press to cry foul, and the second time around his cries were answered—you lost your win the way you’d already lost your title in advance of the fight, by failing drug tests. Cormier stayed the champ at 205 and eventually beat an aging Stipe Miocic to become the heavyweight champion, a “champ-champ.” You had nothing comparable and never will.

You can still make a lot of money letting the heavyweights try to punch your lights out. It won’t be the money you’re always asking for, but it won’t be nothing, either. What else does a guy like you fight for? It never seemed like it was for anything more than money. You were so easily, breezily great that you didn’t affect people the way a ham-and-egger like Glover Teixeira, a hard-ass work-rate guy you beat over five rounds as easily as if you were taking a morning dump, did when he finally won the 205-pound title, your title, at age 42. That was a triumph. Your victories are faits accomplis at best and tragedies at worst. Anthony “Lionheart” Smith recently claimed you were above average at everything but not supremely good at any single thing, yet that didn’t stop you from smiting him. I know you can’t help it if a lot of people feel lousy every time you win. But they do, and they always will.