Let’s win one for the Hostages! 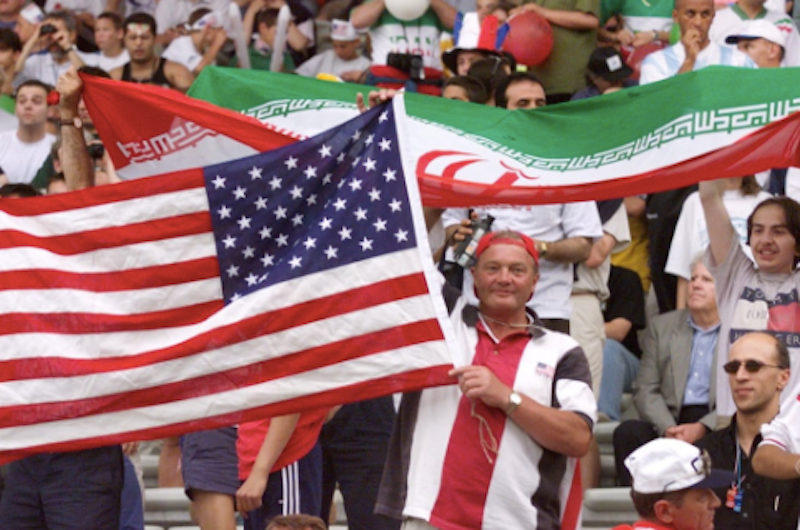 Forty-three years ago, my small town in Ohio found itself suddenly on the international map. I was a freshman in high school, the Pittsburgh Pirates had just won their fifth World Series championship. That was enough international attention for me. But a few weeks later one of my classmates got the news his father was among the 52 hostages taken in the U.S. Embassy in Tehran by a militant group of Iranian college students in early-November 1979.

For the following 444 days, there were occasional TV news trucks in our town. This was a year before CNN went on the air for the first time, so the 24-hour news cycle had yet to be born. Our high school newspaper had a great front page shot of the home of the local hostage guy, and we had access to quotes from the family. Fine coverage for a band of high school journalism nerds.

I was in France during the 1998 World Cup embarrassment by the USA team which included Fox analyst Alexi Lalas on the roster. The USA lost all three group stage games, blanked and outsized by Germany and then Yugoslavia and a 2-1 loss to Iran in Lyon. Brian McBride, a kid from the Chicago suburbs who now has a bar named after him at London’s oldest football ground, scored in the 87th minute against Iran for our lone goal of the dismal tournament. It was a politically-charged match in terms of pre-game hype, but the Iranian squad defused some of that by presenting white roses to their Yank foes before the contest. Both teams would fail to advance to the knockout rounds, so it was all good. Or was it? Perhaps the white roses will return this Tuesday?

For USA soccer fans who have waited eight years to see our national squad in the big tournament, Tuesday afternoon’s clash in Doha will be major. Crushed by England, but then stinging Wales with a pair of late goals, the Iranian squad has survived controversies involving protests, unsung national anthems and the horrific situation of Mahsa Amini, the 22-year-old woman rounded up by a Morality Police in Tehran this past September for not wearing her hijab correctly. She later died in police custody. Add to these Dead Kennedys lyrics come to life, the usual FIFA corruption, the last-minute beer bans by Qatari authorities, the scrutiny over fan wardrobes that involve rainbow flags and Crusaders, and basically this World Cup is the sports marketing version of “Pottersville” from the now-constantly streaming Jimmy Stewart Christmas classic It’s a Wonderful Life. Sleazy jazz, sex workers, broken glass, blinding neon. Empty seats, human rights red cards, and there’s former FIFA President Sepp Blatter, much like Nick the bartender from the Pottersville scenes, wagging his finger and twice stating that his own actions in allowing Qatar to host the World Cup this year was a “mistake.”

If coach Greg Berhalter can build on the confident showing in the 0-0 draw with England on Black Friday, Tuesday’s soccer excursion could go swimmingly with an appropriate 5-2 win by the USA. 5-2, as in 52 hostages, one from my hometown who passed away in Florida in the summer of 2000 at 65. A Columbus Dispatch article later mentioned that the hostage had his wedding ring stolen, read more than 600 books while in captivity, and skipped the ticker tape parade in New York City’s Canyon of Heroes in January of 1981. I remember Stewart Airport in Newburgh, NY, less than an hour from my current residence, as the landing point for the freed hostages. Thought about watching the Iran match in Newburgh for old time’s sake, but the drive home seems foreboding given the nervous consumption of Prosecco during World Cup action.

Many of the yellow ribbons tied around trees had long-since faded, but that doesn’t mean the USA men’s national team can’t rise up and defeat Iran and advance in this delightfully corrupt mega-corporate, religious fundamentalist soccer tournament.

If Berhalter had any Hollywood juice, it’d be great to call in Alan Arkin to address the team pre-game in the dressing room. Arkin could revive his brilliant character Lester Seigel from the 2012 filmArgo about the Canadian/CIA fake film caper attempting to free a half-dozen U.S. hostages from the embassy. In fact, there’s a player on the USA roster who shares the same last name with the hostage from my hometown. It would be apropos, then, for him to score a goal in a stadium just 720 miles south of that U.S. Embassy in Tehran. Why not sneak one past back-up keeper Hossein Hosseini, who had to fill in for the Iran number one who busted his nose in the opening match? Though Hosseini gave up six goals against England in that game, he clean-sheeted Wales in their second group stage match, a 2-0 win that set up this win-or-go-home type of deal. The USA squad is younger (average age 25, compared to 28.9 for Iran) and faster. The backline is solid, our keeper top-notch. Let’s just hope that Iran doesn’t “park the bus” from the start of the match. I have a feeling they won’t. So, there’s no reason for the USA not to win and advance and probably play the Netherlands in the knock-out stage as December arrives.

The crowd at the Al Thumama Stadium in Doha will be heavily tilted toward Iranian support. The capacity of the new stadium, which is shaped like the traditional taqiyah hat worn by Middle Eastern men and boys, is 44,400. More numerology on our side (U.S. hostages held for 444 days). If we’re going all in on religion, as is the local custom over there, I could quote Luke 10:18 and the part about Satan falling from heaven like lightning and our ability to trample on snakes and scorpions to destroy the power of the enemy. But in this case, I won’t. Satan needn’t be involved here because the Ayatollah already played that card back in 1979, calling the U.S. the “great Satan.” (And they don’t even appreciate heavy metal over there.)

We should go with the Narrow Gate. (Like the Victorian turnstiles at Craven Cottage in London, home of the aforementioned McBride’s pub.) Matthew 7:13: “Go in through the narrow gate, because the gate is wide and the road is spacious that leads to destruction, and many people are entering by it. How narrow is the gate and how constricted is the road that leads to life, and there aren’t many people who find it.”