The San Francisco 49ers Prepare for a Super Bowl Run

Not a single "expert" saw this coming. 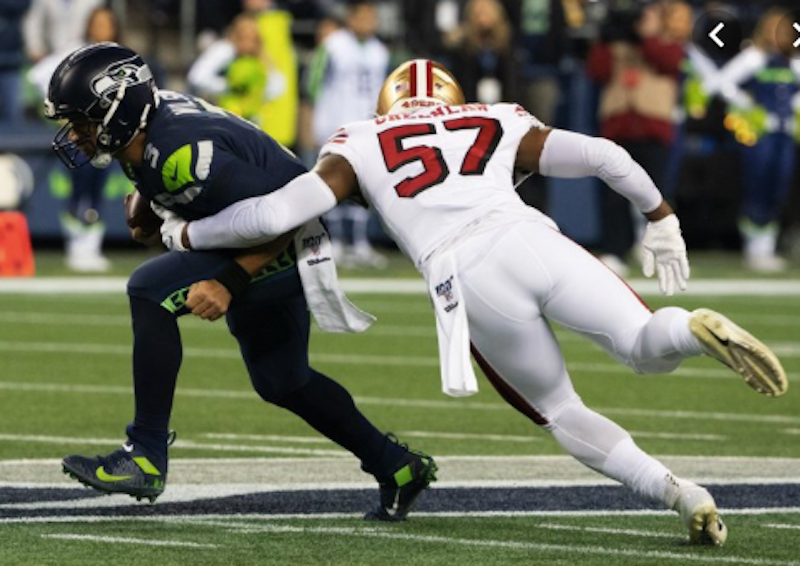 San Francisco 49ers linebacker Dre Greenlaw became an instant team legend after his game-saving tackle of Seattle Seahawks tight end Jacob Hollister in the final game of the NFL regular season with seconds Ieft on the clock. It was the rookie's biggest save since, during his freshman year at the University of Arkansas, he spotted a guy spiking a young woman's drink at a kegger and stopped him from leading her out of the party. Greenlaw brought Hollister down about an inch from the goal line, giving his team a 26-21 win that had seemed nearly impossible when Seattle, just a few plays previously, had the ball at the one-yard line on first down.

Greenlaw's last-second heroics were emblematic of a team that had reversed a 4-14 season last year to finish this year at 13-3. Players stepped up all season to make big plays, some of them rookies. Not counting the six garbage points the Atlanta Falcons scored at the very end of their victory, San Francisco's three losses amounted to a total of seven points. This team can be beaten, but just barely. All three of the 49ers losses, in fact, could’ve been avoided by better coaching decisions from head coach Kyle Shanahan at crucial points in the game. But he's young and still learning.

The final, crucial win came in Seattle, establishing the fact that this isn’t the same team that had lost the last eight games up in the Pacific Northwest.  CenturyLink Field may have gotten into the heads of some of the 49ers veterans, but this is a young team now, with players who've never lost up there at the league's most raucous stadium.

Greenlaw’s play secured the Niners the NFC West crown, a first-round bye, and home-field advantage throughout the playoffs. Had they lost, their seeding would've plummeted so far that they'd have had to go on the road three times to get to the Super Bowl, a feat accomplished only four times in NFL history, but never by a West Coast team.

How does a team increase its victory total by nine games in a single season? First, it gets its starting quarterback back after missing most of the previous season with a torn ACL. While Tom Brady's one-time heir apparent with the Patriots, Jimmy Garoppolo, often slipped into the dreaded "game manager" category (either "worst of the best" or "best of the worst") this season, he doesn't have the game manager's timid spirit. Garoppolo's a confident gunslinger willing to throw into tight coverage. Mistakes like interceptions don't turn him into a self-doubting Hamlet.

Kyle Shanahan, hired as 49ers head coach in 2017, has a playbook so complex that his impact on a team is delayed. The weapon he's building takes time. When he coached Matt Ryan in Atlanta, it took the quarterback three years to begin performing at an elite level. So he was right on schedule this season, with a helping hand from General Manager (and former NFL strong safety) John Lynch, who was hired simultaneously, but came aboard under a cloud of suspicion from not having any front office experience. But it’s all sunshine now. One of the former Tampa Bay Buccaneers' perennial Pro Bowler’s strengths is identifying skilled players who come cheap—players like Daniel Brunskill, Ben Garland, Emmanuel Moseley, Laken Tomlinson, who've all made contributions this season.

Lynch also delivered in the 2019 draft by snagging defensive end Nick Bosa out of Ohio State with the number two pick, and South Carolina wide receiver Deebo Samuel. Bosa looks like a shoo-in for Defensive Rookie of the Year. Samuel’s blossomed from questionable at the beginning of the season to legitimate threat as both a wide receiver and a rusher from scrimmage. Once he makes a reception, his ball-carrying abilities kick in and keeping him out of the end zone’s a challenge.

Speaking of yardage after catches, there's tight end George Kittle, who fights like a wolverine once the ball's in his hands. One of his former coaches once challenged him about running out of bounds, and he took that to heart. Kittle commonly drags several defensive backs along with him as he battles for extra ground. The fifth-round draft pick out of Iowa in 2017, who’s probably the team's best player, brings something extra with his palpable joy from playing the game of football—it's a spirit that can be contagious.

In an unusual development, the 49ers have morphed from a team the defense carries to an offensive squad. The defense has slowed down due to injuries and fatigue (it often appeared incapable of stopping Seattle in the second half) but the defense now gets rest and the possible addition of three key players who've been out with injuries—defensive end Dee Ford, safety Jaquiski Tartt, and former starting linebacker Kwon Alexander. Dee Ford could help restore the team's intimidating pass rush, while Tartt is needed to shore up the flagging defensive secondary. Alexander may find himself fighting with his replacement, Dre Greenlaw, for minutes.

San Francisco’s taken its team out of a long slump with a "brick by brick" approach. There are enough bricks in place now, and the schedule’s there, to get them to Miami for the Super Bowl and a probable rematch with the Baltimore Ravens, who defeated the 49ers 20-17 to end their season-opening eight-game winning streak. I doubt that many would complain about that matchup.