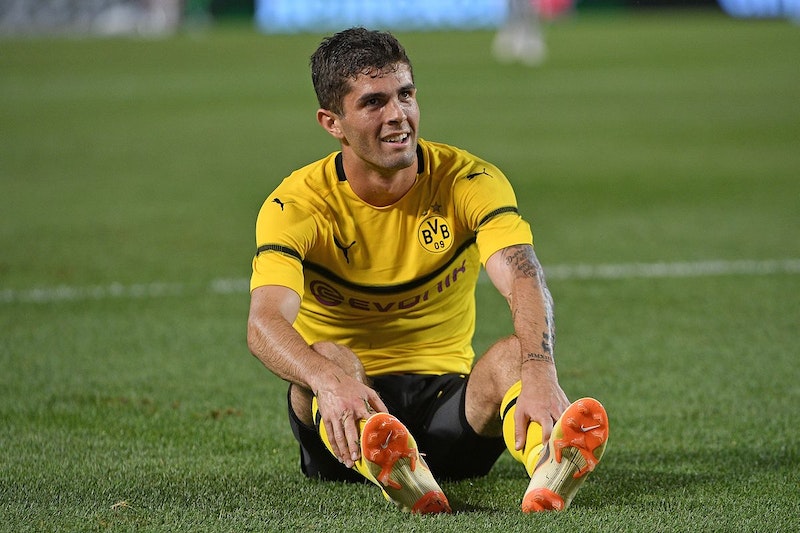 Where were you when Christian Pulisic scored his hat trick against Burnley?

That’s my nomination for the new question on the 2020 U.S. Census form. It would follow the one about American citizenship and whether or not you think kale is indeed a superfood. If you can name the captain of the 2002 U.S. national soccer team, you are awarded automatic citizenship, by the way. To be truthful, I was on the toilet when Pulisic, the lad from Hershey, PA, scored his second goal for Chelsea Football Club during his lovely coming out party against Burnley.

After messy arrangements, I emerged to quickly scare the neighbors when the 21-year-old then scored his third goal for Chelsea and made yet more history after a slow start at Stamford Bridge. The neighbors glanced in my direction with head-scratching gestures. “The Pirates aren’t even playing,” they say of my dormant MLB squad that rouses loud responses to televised broadcasts during summer evenings. No, this offseason features Saturday Chelsea football mania in my homestead now, despite my wife who lived in the shadow of QPR for many years in London and was perplexed in the miasma of October 2001 Manhattan to meet an American on a blind date at McHale’s Bar who was obsessed with English football.

Apparently, like Watford, she can’t win for losing. One of our earliest dates in London was a match at West Ham’s Boleyn Ground. It seemed close on the London tube map but the ride into East London was interminable from Bayswater. We sat down late to witness a depressing Hammers defeat to Charlton 0-2 on Aug. 31 with former Fulham guy Claus Jensen, a Dane, scoring early while Jonathan Fortune put Charlton up by two just before halftime.

The supporters sang “I’m Forever Blowing Bubbles” and we all waited a long time to get back on the tube at the tiny station after the match. The Queens pub near the station had everything nailed down and no glass available to patrons. I considered it a cool fifth date but I think her parents preferred we attend the theater in the West End instead of watching footballers whom her father, the intimidating figure known as historian Paul Johnson, famously said “should be lined up against a wall and shot.” This puts an underground American sportswriter in a difficult position, but I was able to tread water with adequate oxygen during a family party in Bayswater.

I’d usually hide in the “still room” but soon found a pair of famous playwrights bending my ear about the quality of cricket. They were glad to have an audience of one “who cared about sport” at the Johnson’s party. Harold Pinter missed the old days, he said, as cancer treatments were bringing on hallucinations involving talking lamps. He had heard reports about “juiced baseballs” and thought the concept to be hilarious. Tom Stoppard, on yet another back-garden cigarette break in the rain, agreed, but purported nothing can do more damage than a cricket ball, grasping an invisible one in his hand. They were impressed with my trip to Upton Park to see West Ham. Stoppard’s lighter failed and he asked me for a light and I had matches from an excellent Bronx bar called Glacken’s and he wanted to know about the Grand Concourse and all was right with the world.

As the international soccer break sets in this weekend, Christian Pulisic has time to heal his hip injury that occurred after his clash with the goalpost while heading his first home goal past Crystal Palace keeper Vicente Guaita. It was an absolutely instinctual strike that saw a deflected pass return to his brow and this kid is suddenly building on that hat trick that the announcer reminded us featured a left foot, right foot and header goal. The lad, whose middle name is appropriately Mate, spent time as a kid in Tackle, England, outside of Oxford and is now on fire and this is why I set my alarm to awake at 7:25 a.m. to watch Chelsea play Crystal Palace last weekend.

The last time I set my alarm to watch English football was when the great Clint Dempsey was toiling at Fulham. So I certainly disturbed my neighbors again when Pulisic scored his fifth goal in three games with that persistent header in front of the home crowd. He continues to set records despite his well-publicized slow start at Chelsea which has only highlighted the smarts of new manager Frank Lampard, who has so much street cred in West London that he could shoot somebody at the Fulham-Broadway tube station and get away with it a la the former owner of the USFL New Jersey Generals who happens to be the current President of the United States.

I’m sure I have written in this space about Dempsey, aka “The Deuce” who was a renegade Texan who saved Fulham from relegation and hung out with hip-hop dudes and was the definition of American cool, especially when he destroyed Juventus with a clutch goal chipping the keeper during late-round Europa League action. “And it’s lifted the roof off the old place,” the English announcer said after Dempsey scored and I’ll never forget the sight of him running through the extremely narrow channel behind the goal and the front row fans of Craven Cottage.

Bundled up English football fans were leaping forth and going crazy as a cool dude—a cool American dude I should say—ran past them in celebration tugging at the team crest, wide-eyed as Dempsey always was after he scored. I remember it like it was yesterday and it made me commit to following American lads achieving stardom in England. Because sooner or later I’d be standing at a pub somewhere, be it in Slough or Watchet or Maida Vale or Bristol and wearing my telltale Pirates baseball cap I’d be forced to confess that “Yes, I’m an American and yes, Clint Dempsey and Brian McBride saved one of your clubs from relegation.”

Now I can boast about Pulisic and wear his #22 kit and tell tales of Hershey, PA, to the punters in London who might question his virility given his size and how every young kid playing for Chelsea now looks like your paperboy. All you have to do is search YouTube to see Pulisic attacking the goal mouth with an energy that goes beyond Dempsey’s cool distance and attacking midfield nonchalance. Pulisic is not chipping, he’s cutting through the six-yard box with an intent to score. He’s finding open space where others fail to see opportunity, much like hockey legend Wayne Gretzky, whom I’m convinced existed .09 seconds into the future which is why he knew where McSorley would be before Marty himself knew it. “Go where the puck is going, not where it’s been,” Gretzky’s father always advised.

Pulisic is smaller than Dempsey but more pit-bullish when it comes to the tight quarters of the goalmouth. It’s cool that Pulisic wears 22 for Chelsea and Dempsey wore 23 for Fulham. He’s surrounded by fellow youngsters Mason Mount and the Brazilian known simply as Willian. The results are wonderfully superb to watch and that’s why Chelsea will eventually challenge boring Liverpool for the Premier League title once things get down to cases this season.

The bottom line is Chelsea has such depth that they’re fun to watch every weekend because someone is always trying to win a starting spot, much like an American baseball squad in the late stages of magical Spring Training games in sunny Florida. They’ve got a former star as manager, and while Tottenham sinks like a stone, Chelsea reemerges as a West London dynamo. The Blues still do the team walk-out to the ska classic “The Liquidator” by Harry J. Allstars and if you’re standing there in The Shed at Stamford Bridge as an American, you can’t hold back the tears of joy. Try. I dare you.