The NFL's Big Surprise: The 49ers

Nobody picked them, but nobody can beat them so far. 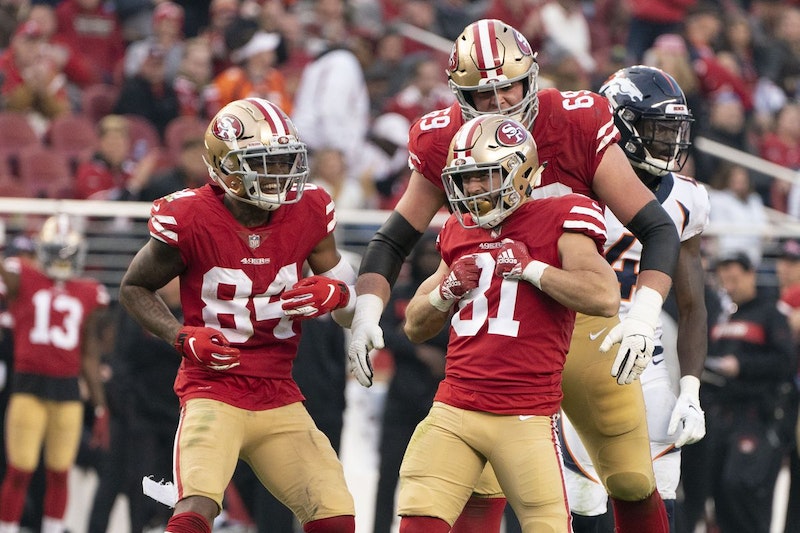 I was talking with a fellow San Francisco 49ers fan before the season began, and asked what he thought the team's prospects looked like. He reckoned around 8-8, and I didn't disagree. That would be a significant improvement over last year's 4-12, and we don't get our expectations too high after the misery of recent seasons. Many "experts" were predicting the 49ers to finish in third place in the NFL West Division this season, which shows what their opinion's worth. But the way it's looking now, the team can finish the season 4-4 and get a playoff bye.

But after defeating the Arizona Cardinals 28-25 in a Thursday night game after demolishing the Carolina Panthers 51-13 the previous Sunday in a game seen as a "test," the Niners are now 8-0 halfway through the season. Two years ago, they were 0-8 at this point. Joe Montana was throwing TD passes to Jerry Rice the last time the 49ers came out of the gate this fast.

Things are looking up; maybe the Colin Kaepernick curse has finally been lifted. Jimmy Garoppolo, who's somehow carved out a 16-2 career win-loss record as starting NFL QB, is back taking snaps from the center after missing most of last season with a torn ACL. The former backup quarterback for Tom Brady, unlike Kaepernick, seems to lean right, politically, but he's low key. It's unlikely he'll be photographed wearing a MAGA hat, a fashion choice that's not even permitted in the Bay Area anyway. There's nothing a team that's going places dreads more than distractions, a big reason Kap can't get another job. His continued unemployment is strictly business, not race-related. If teams thought he could get them to the playoffs, they'd be calling him.

We've been hearing about head coach Kyle Shanahan's offensive wizardry since he was hired, but wondering when he was going to show it as he went 10-22 for his first two years. Now that he's had enough time to put his stamp on the team—the same amount that coaching genius Bill Walsh had before his first Super Bowl win in 1981—the former Atlanta Falcons offensive coordinator's delivering. Shanahan's calling card has always been devising innovative, "plug and play" zone blocking schemes for the running game. Plug any decent running back into his plan and it works well, which the team's doing this year with Matt Breida, Raheem Mostert, Jeff Wilson and Tevin Coleman. Averaging 171 rushing yards per game, the Niners trail only the Baltimore Ravens in that department.

When you score 51 points against a solid defensive team that's won four straight, as the Panthers had, but your defense is considered the reason you're winning, that's not a bad position. The 49ers top-ranked defense (along with the Patriots), with its fearsome pass rush and knack for forcing turnovers, takes a lot of pressure off of Garoppolo and his surgically-repaired left knee, as does the running attack that sets up the passing game.

Before the Arizona game, working with a lackluster crew of wide receivers and some key injuries on the offensive line—both starting tackles, which would normally crippple an offense—Garoppolo had fallen into the dreaded "game manager" role this season, relying on the short passing game. But that's all the team's required of him, at least before it went to Arizona. Having a go-to receiver like Pro Bowl tight end George Kittle, one of the league's brightest new stars, has gone a long way towards making up for the lack of receiving talent downfield.

The Arizona Cardinals game produced two positive revelations while opening up a small window of doubt. Garoppolo finally had his breakout game, proving that he's not strictly a game manager, by throwing for over 300 years with four TD passes and no interceptions, a feat Montana achieved only once. And then there was the team's new acquisition from the Denver Broncos, veteran wide receiver Emmanuel Sanders, who had seven catches for 112 yards and one TD. It's remarkable that Garoppolo and Sanders have found such chemistry after just two games together, giving the team the deep-threat weapon they've been missing.

On the doubt side, the 49ers defense had limited success in stopping the Cardinals running attack. Perhaps it was a just a matter of not enough rest, a common problem with Thursday games. Their next game against archrival Seattle—the biggest game of the season so far for the Niners—should go a long way towards answering that question.

The 49ers have managed to come up with the rare combo of creative brilliance combined with physical dominance. They can either outthink you or run right over you, whichever is called for. They can also run right by you, as they're probably the fastest team in the NFL.

There's sometimes been a Good Jimmy and a Bad Jimmy this season, but there was no sign of Bad Jimmy against Arizona—the player with the occasional tendency to throw inadvisable, rookie-like passes that can seriously backfire on his team. By week 10, three key players who've been out with injuries—offensive tackles Joe Staley and Mike McGlinchey, and fullback Kyle Juszczyk, who's played a crucial blocking role in the dynamic running attack—should be back on the field. If Good Jimmy keeps showing up, with his impressive ability to remain collected and convert on third down passes, the sky's the limit.