Lifelong Lessons of the Martial Arts

Facing up to challenges on the mat. 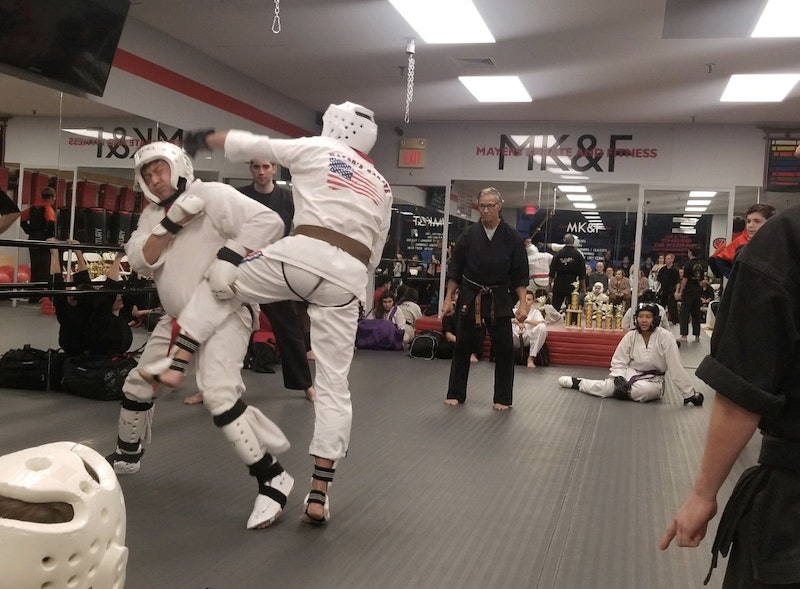 My opponent is a brown belt, one step up from my red belt. He’s a nice guy, a fortysomething accountant, but fast and aggressive on the mat. A haphazard kick gets me in the groin, but the athletic cup does enough to keep me in the match, which I lose on points. My next match, right afterward, is against a red belt friend in his early-20s. It feels like I’m about to lose again, as I hang back to avoid kicks with newfound caution, but a couple of quick punches to his abdomen enable a narrow victory. I receive a small trophy, and my loins recover soon enough.

Such was the scene at Mayer’s Karate & Fitness in North Haledon, New Jersey, during its annual mid-January tournament. I’ve been attending the dojo for four years; my son, who began as a pre-schooler, is now a brown belt who’ll soon celebrate his first double-digit birthday. At 54, I’m one of the school’s relatively few adult students. Plausibly, I’ll be a brown belt in about a year, and my black belt test could come a couple of years after that. That test takes four hours, a challenge of physical endurance as well as mastery of technique. I have a long way to go.

Mayer’s Karate teaches a Korean style called tang soo do, which translates literally as “the way of the Tang Dynasty hand,” reflecting early Chinese influence, and which may be taken to mean “the way of the empty hand.” The more familiar tae kwon do, by contrast, is “the way of the foot and fist,” and it puts a greater emphasis on kicking than does tang soo do. Tae kwon do arose in the mid-20th century from a South Korean nationalistic effort to unify several styles, but tang soo do ended up keeping a separate identity.

The martial arts are something I gave up on too early in my youth. Toward the end of the 1970s, at age 13 or so, I spent perhaps nine months as a student of tae kwon do, then little known to Americans and often described as “Korean karate.” The school I attended, located above the Elmwood theater on Queens Blvd., was run by Duk Sung Son, one of the founders of that style, who’d attained the exalted rank of ninth-degree black belt. There were newspaper articles about Mr. Son, such as the time he was running late at night in Central Park when would-be muggers surrounded him only to be scattered by his flurry of kicks.

One of the instructors was a tall, blond man named Lenny, who spoke with a German accent and ran classes with particular intensity. One day, he asked some of us teenage students to punch him in the abdomen. A few complied with some tentativeness. When it was my turn, I gave it my full force, driving my fist into what felt like a wall. Lenny nodded, pleased, and said: “Good.”

Unfortunately, I was a quitter as a kid. I attained a green belt, the third level in that school’s ranking system, but never went on to the next level, purple. A key factor in my decision was losing a fight in junior high school against a kid named Manny, who punched me in the mouth and chipped several teeth. That should’ve been a reason to redouble my martial arts efforts, but instead I took it as a basis for discouragement. Sometime later, I ran into an adult purple belt on the street who asked where I’d been. Told I’d left, he lamented: “You were really good.”

Decades later, when my young son was taking lessons at Mayer’s, I realized I wanted to do that too. Soon, I was. I began anew as a white belt, in a ranking system that’s similar to, but has a few more levels than, the one I’d known in my youth. It goes white, yellow, orange, green, blue, purple, red, brown, black. Kids also do incremental steps between color levels, represented by stripes, and may become junior black belts before earning a full black belt.

In martial arts, there’s often a point made of calling you by your last name with an honorific such as “Mister” once you’ve attained a black belt. Mr. Mayer, the founder of Mayer’s Karate, is a seventh-degree black belt, and he has entrusted day-to-day running of the school to his able lieutenant, Mr. Scielzo (pronounced “shell-zo”), who holds a sixth-degree black belt. Another instructor, Mr. Harris, runs a program focused on special-needs kids.

At any good martial arts school, character building is part of the curriculum. At Mayer’s, a student creed hangs on the wall, stating 12 principles: Develop positive habits. Develop self-discipline. Bring out the best in yourself. Bring out the best in others. Believe in yourself. Encourage others to succeed. Respect oneself and others. Control your emotions. Continue to improve and learn. Plan your destiny. Indomitable spirit. Live life to the fullest.

At belt tests, one may be asked to recite the student creed, and I’ve just written it from memory. The martial arts, it seems to me, are countercultural in a good way. They pull you away from complacency, selfishness, instant gratification and mindless entertainment. They teach you lessons about life, perseverance and second chances. They build your confidence, and they just possibly could save your life. All that is worth taking a few unfortunate kicks.