The Los Angeles Lakers and the Art of Legacy Inflation

Archaic titles claimed by franchises turn a blind eye to the past state of basketball compared with the modern game. 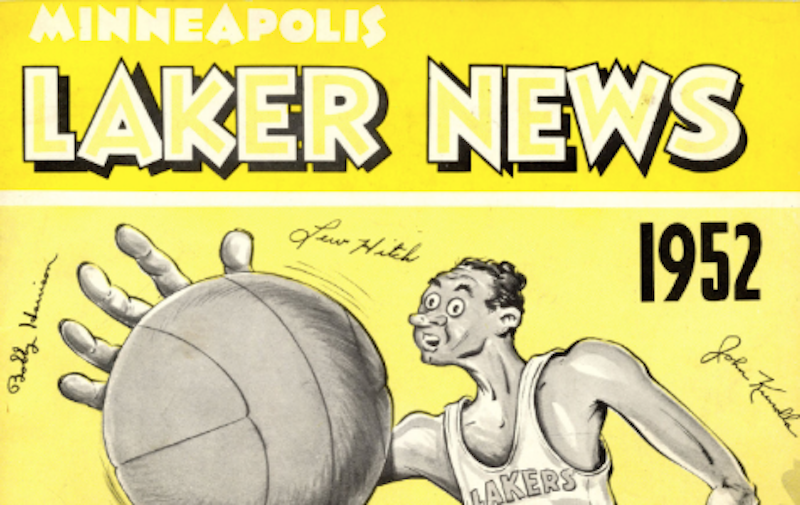 On April 11, 2002, the Los Angeles Lakers completed their assumption of all things “Laker” by affixing two banners to the wall of the Staples Center. One banner featured the names of the five Minneapolis Lakers players enshrined in the Naismith Memorial Basketball Hall of Fame, along with the name of their coach, John Kundla, and the other acknowledged and laid claim to the five NBA championships won by the Lakers franchise in Minneapolis.

All of this was done during a late-season home game against the Minnesota Timberwolves, which was either a deliberate attempt to legitimize the title grab by ostensibly paying homage to the former Minneapolis franchise while some of their former fans might be tuning in, or a cruel powerplay to strip Minnesotans and their city of five of their championships and make them watch helplessly while it occurred. Certainly, there would be little Minnesota could do to honor the men who had done all of their winning while headquartered in Minneapolis if the most public monuments to their achievements adorned the walls of the Staples Center.

The Lakers, led by Shaquille O’Neal and Kobe Bryant, took the floor adorned in bright blue jerseys bearing yellow trim, with the classic “MPLS” lettering of the defunct Minneapolis Lakers franchise stitched across their chests. On commentary, legendary Lakers play-by-play announcer Chick Hearn immediately localized the color combination, claiming that it reminded him of “...UCLA, all the way!”

During a halftime ceremony, Los Angeles Lakers legends James Worthy, Elgin Baylor and Magic Johnson were among the former players who awarded championship rings and other trinkets to the former members of the Minneapolis franchise, including their franchise center George Mikan, and then the banner representing five championships was hoisted along the wall. Color commentator Stu Lantz quickly did the math, but then made a Freudian slip when he remarked, “So, you add those five championships with the eight Laker banners that are up there, and you’ve got 13 franchise championships!”

What Lantz intended to say was that adding the five Minneapolis championships to the eight Los Angeles championships would yield 13 total Lakers championships. However, in his heart Lantz must’ve recognized that the essence of the Minneapolis dynasty was distinct from that of the 21st-century Lakers, and he was an accessory in an obvious ruse to retroactively and artificially boost LA’s title tally.

For the price of six gold rings and a bit of cloth, Jerry Buss had delivered as many championship banners to the walls of the Staples Center as the combination of Magic Johnson and Kareem Abdul-Jabbar. He simply assumed everyone would look the other way while the LA Lakers’ title tally climbed from eight to 13 to move within three championships of the Boston Celtics’ 16. For all intents and purposes, his assumption was correct.

Had anyone in the Los Angeles Lakers organization looked into what it actually took, and didn’t take, for the Minneapolis Lakers to win their five NBA titles? The answer to part of that question is “We don’t know.” And the reason we don’t know is because the league didn’t keep stats for things like rebounding during the first two seasons George Mikan was playing in Minneapolis. The first of their claimed NBA championships was actually a BAA (Basketball Association of America) championship, which the franchise won in 1949 by winning two best-of-three playoff series, followed by a best-of-seven playoff series. Eight victories produced a title.

The following season, the three-year-old BAA merged with the 12-year-old National Basketball League after the two leagues waged war against one another in a fashion that was viewed as the big-market, big-money teams of the BAA against the small-town, underfunded NBL squads. Following the merger in August of 1949, a new league called the National Basketball Association was formed with 10 teams from the BAA and seven teams from the NBL.

For some nonsensical reason, the 1949 BAA championship of the Minneapolis Lakers manages to slip through the cracks and is represented as an NBA title by the Los Angeles organization, but the Washington organization lays no claim to the Baltimore Bullets BAA title of 1948 despite the fact that the historical successor to that team presently resides less than 40 miles from the original's point of origin.

The Washington Wizards might as well add that banner to their rafters despite not technically being the same franchise as the one that won the 1948 BAA title, because they’re presently the only team with a historical claim to a BAA championship that is not acknowledging it with a banner. In 2014, the Golden State Warriors decided they should add some historical relevance to Oracle Arena and began claiming all of the championships won by the franchise while it was in Philadelphia, including the BAA championship of 1947. And who can blame them? If the Lakers organization is going to go around absorbing titles won in distant lands under laughable conditions, why shouldn’t everyone get in on the act?

While we’re on the topic, should the Detroit Pistons start hanging banners to commemorate the accomplishments of the Fort Wayne Zollner Pistons of the 1940s? Not only did that squad win NBL championships in 1944 and 1945, but they also won the World Professional Basketball Tournament—one of the first attempts to crown a legitimate, multi-league world champion of basketball—for three consecutive years, from 1944 to 1946. Of course, all of this would be nonsensical, but there’s nothing to prevent the Pistons from doing it, and especially when everyone else is doing it. Detroit can slide itself right next to the Chicago Bulls as six-time world champions simply by doing a little redecorating inside Little Caesars Arena.

In all seriousness, these archaic titles are claimed by franchises that are turning a blind eye to how vastly different the state of basketball was in the 1940s and 1950s when compared with the modern game. These staggering differences are apparent just by evaluating the state of the NBA in the final season of the original Lakers dynasty in Minneapolis. The organization’s fifth championship was won in a league that had contracted to only nine teams after the majority of the old NBL teams abandoned the NBA in favor of the ill-fated National Professional Basketball League, which folded in the middle of their inaugural season in 1950-51.

Every NBA team played 72 games during 1954’s regular season, but to say the schedule-making was unbalanced would be a gross understatement. As a case in point, the Philadelphia Warriors played 19 games at home that season, along with 22 games on the road, and 31 games on neutral ground. Meanwhile, the Syracuse Nationals were permitted to play 19 fewer neutral-ground games and 13 more games at home. Even if you’re not a stickler for fairness, this is certainly unfair.

Six of the NBA’s nine teams—two-thirds of the league—qualified for the playoffs before being separated into two groups of three to play a double-round-robin tournament, where each team was awarded at least one home game.The top two teams from each round-robin bracket then competed in a best-of-three series, which allowed the winner to advance to the NBA Finals after winning only two games. The Finals reverted to the best-of-seven format we all know, but how are modern fans supposed to take it seriously that a team could win the NBA championship by winning a grand total of six games in a traditional playoff format?

Frankly, Lakers owner Bob Short, who moved his Minneapolis team to Los Angeles in 1960, was correct in wanting to distance his franchise from this unfortunate era. Neutral-ground games? Double-round-robin series? Six playoff victories to crown the NBA champion? Understandably, the Lakers organization desires to match and surpass the title count of the Boston Celtics as quickly as possible, but claiming championships and hanging banners from an embarrassing era of basketball history was a desperate way for Jerry Buss to go about closing the gap.