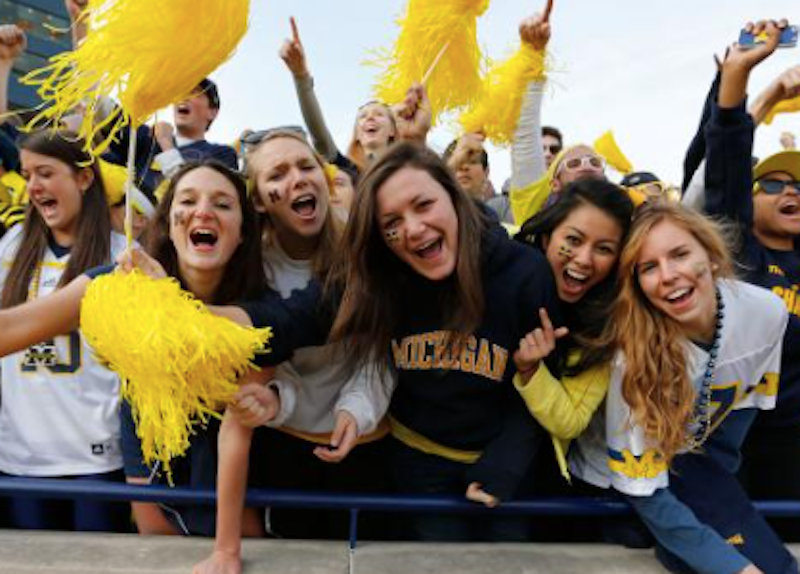 I knew I’d be hearing this eventually, even if it was a cold, damp, rainy October afternoon in Raleigh during the North Carolina State Fair. I’d been treading on what was presumably neutral ground, and I’d also assumed my navy-blue hoodie bearing the “MICHIGAN” name in arched block letters wouldn’t stoke the ire of any of the other State Fair attendees.

Then again, I’d already been greeted with at least three well-received “Go Blue!” hails by fellow Wolverines distributed amongst the crowd, so I knew I could only linger out in the open munching on deep-fried Oreos for so long before being heckled by someone intent on acting as a verbal cudgel on the behalf of my undergraduate arch rivals.

As my eyes darted in the direction of the insult, I was surprised to find its source was far shorter and younger than I’d expected it to have been. A young, frail, brunette teenage boy—certainly no older than 14—quickly walked toward me to continue his denigration of my school.

“Who is ‘we’?” I asked, legitimately confused by his phrasing.

“Kid… do you go to Ohio State?” I asked, exhaustedly.

“No,” he replied, appearing to be surprised by the question. “But... my grandfather did!”

“I actually graduated from Michigan, sir,” I explained to him. “And since I didn’t play on any of the teams there, I don’t usually say ‘we’ when talking about anything the sports teams are doing. If I don’t get to say ‘we,’ you definitely don’t get to say ‘we.’”

I was serious, too. I’m very reluctant to verbally insert myself amidst the members of Michigan’s sports teams when discussing their gameday performances or accomplishments, but that’s only one of the hangups I have about people claiming allegiance to the sports programs of collegiate institutions with which they have little to no formal affiliation.

It’s downright insulting for someone who purchased their collegiate sports fandom in the form of a $9.99 bargain-bin t-shirt to instigate a sports-inspired shouting match with someone who forked over tens of thousands of dollars in tuition money, attended the classes, wrote the essays, took the exams and earned the degrees. I’m shackled to that institution forever, and it can never be stricken from my resume. Meanwhile, they’re free to change their allegiance as easily as they change shirts… or underwear.

With that in mind, I’d propose the establishment of rules that everyone should follow in order to reduce the likelihood that alumni sporting the clothing of the schools they attended will have to respond to verbal barbs from someone too young to have attended any institutions of higher learning, let alone have to take their rebuke seriously.

Rule #1: If you didn't attend the school you support, you can never say "We." Not only did you not participate in any of the games, but you haven’t even interacted with any of the athletes in a classroom setting on the college’s campus. “We” is off limits to you.

Rule #2: If you didn't attend the school you support, don't expect an alum of the rival team's school to take your fandom seriously. It’ll be greeted with bemusement as that alum struggles to explain to you why your fandom can easily shift from program to program, while actual alumni aren’t afforded that same option.

Rule #3: Your fandom will be lent a modicum of credibility if the college team you support is not a powerhouse. I've yet to meet a casual, non-student, non-alumni, non-alumni's-offspring fan of Northwestern University’s football program. I’ve also never heard someone use “we” in reference to Yale or Harvard if they didn’t attend those schools. The attendees of these schools would never let you get away with it.

Rule #4: Don't claim to be a fan of the powerhouse team of your state simply because you live in that state if there’s a much closer, less-accomplished team within that same state that you’ve opted not to support. If you live in Charleston, South Carolina, you don’t get to claim to be a fan of Clemson Football on the opposite side of the state, while bypassing the University of South Carolina completely. Also, if you magically became a fan of Clemson Football five years ago, your fandom is a joke, and no one should take you seriously.

Rule #5: No one is allowed to cheer for Duke University, ever, unless you went there. Statistically speaking, that leaves practically no one eligible to cheer for them. They're a clear case of private school that doesn't leave you the opening to root for their teams based on the grounds of ethnic identity (Notre Dame) or religious affiliation (also Notre Dame). Duke’s also a fantastic litmus test for true fandom; if you’re only a fan of Duke Basketball and not a fan of any of Duke’s other athletic programs, your fandom is completely fraudulent.

Rule #6: Only non-college graduates can utilize the employee loophole. There is an employee loophole that entitles you to cheer for a university’s sports teams if you work directly for that university, its hospital, or any of its adjunct entities that employee large numbers of people, and for which there is a formal affiliation (e.g., Duke Energy or Duke Power). Also, your fandom receives bonus points if you’re an employee of the university and you’ve availed yourself of the Continuing Studies programs offered to staff. Sadly, this loophole only applies to you if you didn’t attend any other colleges or universities at all. To be clear, I don't want to hear about an Auburn University graduate who cheers for Georgia because they work in Athens as a librarian.

Rule #7: If you were ever in a branch of the armed forces, you can rightly support the teams of Army, Navy and Air Force. However, the legitimacy of your fandom will be called into question if you only care about the result of the annual Army-Navy Football Game, and never pay heed to to the results of any of these teams’ other games. If that’s the case, shame on you.

Rule #8: You need to recognize that your years of fandom for a school you didn't attend—no matter how passionately you have proclaimed your support for that school’s teams—are instantly trumped by the fandom of a newly enrolled undergraduate attending that same school. They’re stuck with that institution on their resume for the rest of their life, so their connection with that school is substantially more personal than yours. After all, it’s a school that has a team, not a team that has a school.

Rule #9: If you acquired an advanced degree, you’re never allowed to support the teams of your grad school over your undergraduate institution. Picking up a master’s degree through Bama by Distance doesn’t entitle you to start cheering for the Crimson Tide to beat the Razorbacks if you attended Arkansas as an undergrad. Also, all of your undergrad classmates will hate you.

Rule #10: If you’re a student at Purdue University Global, you did not go to Purdue University in West Lafayette.This distinction may seem minor to you, but graduates of Purdue’s main campus will sort you out very quickly if you suggest that your support of the Boilermakers is as meaningful as theirs.

Rule #11: Elements of this rule came up earlier, but it is worth repeating with the benefit of a visual aid.

Next, select a basketball team that you passionately support from the following group of schools: Duke, North Carolina, Kentucky, Villanova, Louisville, Connecticut.

Now, if you consider yourself to be a diehard supporter of (for example) Ohio State Football and Kentucky Basketball, or Alabama Football and Duke Basketball, then you’re the worst kind of bandwagon-jumping college sports fan, and everyone is laughing at you behind your back.