Do Black Quarterbacks Have a Complexion Advantage? 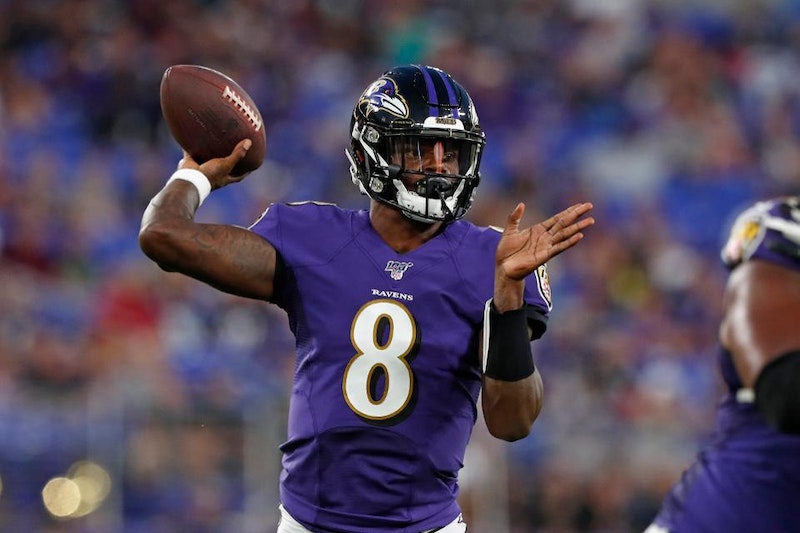 Baltimore Ravens quarterback Lamar Jackson, who’s black, is skilled at disguising the football on play-action passes. He's a sleight-of-hand artist, so defenders have a hard time determining whether he's handed the ball off to a running back or has kept it to throw. After the San Francisco/Ravens game last week, 49ers radio announcer Tim Ryan partially attributed Jackson's success with this technique to the fact that the dark brown ball blends in with Jackson's dark hands and arm, and dark uniform, camouflaging the ball. For sharing this observation last week, the team suspended the announcer for one game.

Ryan, who's white, said: "He's really good at that fake, but when you consider his dark skin color the dark football and dark uniform, you could not see that thing." His statement was accurate, but he was incorrect to assume that bringing skin color into his analysis would be acceptable in this society. Whether or not the 49ers thought the remark was ill-intentioned is irrelevant—they had a fire to put out. Even if they'd determined that the comment was innocent of racial bias, it's too messy to attempt to parse it for the public. The team issued a boilerplate statement saying how disappointed they were in Tim Ryan and that he's expressed regret.

If the combo of dark hands and arms with a dark uniform is actually a competitive advantage, then that's a new angle and a legitimate—if awkward—topic of discussion. Teams are always looking for some kind of edge. But Ryan can't ever frankly discuss it again, at least in public, and neither can any other non-black person. Dr. Harry Edwards, a sociologist and 49ers consultant, said in an email to the team that he was troubled about Ryan's remarks promoting bigotry against black quarterbacks, adding the announcer's analysis of Jackson's ability was "profoundly obtuse and ignorant on its face."

Edwards, who’s black, pointed out the historical dearth of black quarterbacks in the NFL, and expressed concern that Ryan's words implied that black quarterbacks have an advantage over their white counterparts. "The color of the hand that handles the football in contrast to who is simply the better QB," he asserted, "will be of absolutely no consequence.”

While that statement has a righteous feel about it, Edwards is not a defensive player who's had to struggle with figuring out if Lamar Jackson still has the ball. The 49ers star cornerback, Richard Sherman, who has faced this challenge, spoke up and said that when he and his teammates viewed the tape of the Ravens game, they had a hard time following the ball for the very reason Tim Ryan posited. Sherman said that Ryan made a "great point," but that he could’ve chosen better words—ones that didn't point to Jackson's skin color. But, in reality, there's no other way to make the point.

Edwards is a black activist who has a role to play. His job was to slap Ryan's wrist, but to draw no blood. The 49ers then sit him for a week as his  penance, and he's absolved. I can't blame Edwards for his inaccurate assessment of color optics, but less explicable are people like sports writer Dan Clark of TBL Daily. On Twitter, he called Ryan's words "appalling" and said that the punishment should have been harsher. Clark, who's white, took a lot of abuse for this but he remained defiant even after Richard Sherman spoke up, telling his "trolls" to "fuck off." He was sticking with the worst interpretation of Tim Ryan's intentions, which is that he was trying to diminish Jackson's skill at deception by attributing some of it to his race.

The way Ryan phrased his observation left a smidgen of doubt about his intentions—it's that "but" after saying Jackson was good at the fake. Things don't always come out perfectly during a live broadcast, but he now knows that he should've made an effort to clarify that the camouflage aspect was just an extra, not a defining, advantage for a skilled quarterback. Or he knows that he wasn't the right person to broach that topic.

Edwards has to meet certain expectations, which he did by using familiar race-relations rhetoric rather than actual football analysis. Dan Clark wanted to establish his anti-racism credentials as a white person, so he went overboard and called for a greater punishment without knowing anything about what kind of person Tim Ryan is. Richard Sherman, a Stanford grad, is a thoughtful person with no axe to grind. He stopped just short of spelling things out, but when he said that Ryan should've made his point without referencing skin color, which is not possible, he was really saying that it's probably better that white sports commentators lay off on this topic. That's pretty good advice.