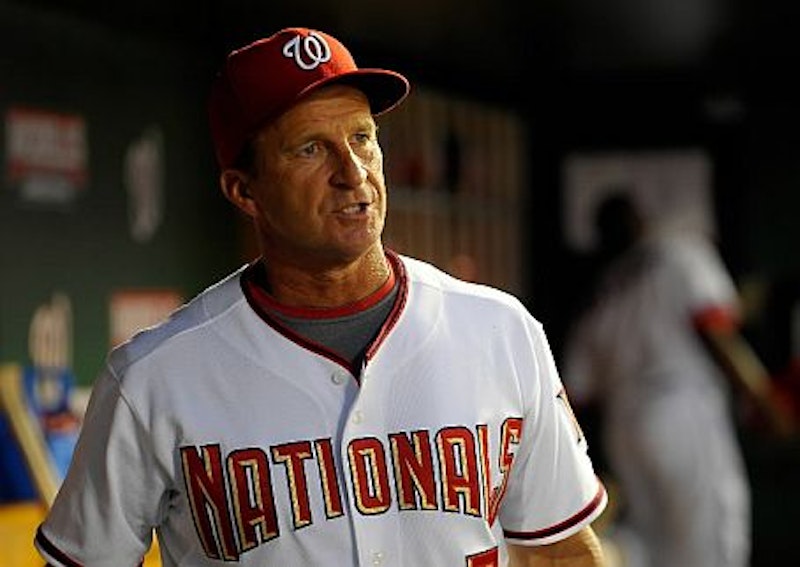 Jim Riggleman is a baseball lifer. He got his first shot at managing a Major League team with San Diego when he was just 39. He had the doormat Washington Nationals on an incredible roll after winning 11 of their last 12 games. Riggleman's odd decision to resign on Thursday afternoon leads observers to draw one of two conclusions: Riggleman either overvalued himself and the Nats called his bluff or he was just tired of the grind and used the contract squabble as an excuse.

Riggleman has a career winning percentage of just .445 in parts of 12 big league seasons. His teams have only finished over .500 twice. Based his track record Riggleman is hardly in a place to demand a contract extension. It's difficult to imagine that a hot week and half had inflated Riggleman's ego to the point that he thought he could offer the Nationals an ultimatum and be taken seriously. Maybe Riggleman sees Joe Torre staring back when he looks in the mirror.

The more likely scenario is that Riggleman is just tired. A Major League season can be a grind. Riggleman is nearing 60 and not everyone has Jack McKeon's undying passion for the dugout. There's no shame in just wanting out, but there is shame in quitting before completing the job you were hired to do.

It looks like Riggleman just tapped out. While his young team is riding high and nearing the thick of the NL Wild Card race Riggleman just took his glove and went home. I hope it's what he really wanted because he lost a lot of credibility on Thursday afternoon. Maybe things are so dysfunctional in the Nationals organization that Riggleman just figured it wasn't worth the trouble, but the timing of his decision is curious and unfortunate. The team is now in a bind and forced to find a new manager while maintaining the positive momentum established over the past few weeks.

The Nationals look to have a promising future with young homegrown players starting at five positions, Michael Morse mashing with regular at bats, Bryce Harper embarrassing Single A pitchers and Stephen Strasburg on the rebound. If Riggleman really didn't want to be on board for the ride then the Nationals will be better off in the long run. Riggleman, on the other hand, may have a hard time finding a managing job in the Texas League. He walked out in the middle of a successful season with another three months left on his contract. If a player had pulled the same crap that Riggleman dropped on Mike Rizzo's desk he'd be rightfully crucified by the press and fans alike.