The Case of Jordan Williams

The Maryland Terps have lost their all star. What's next? 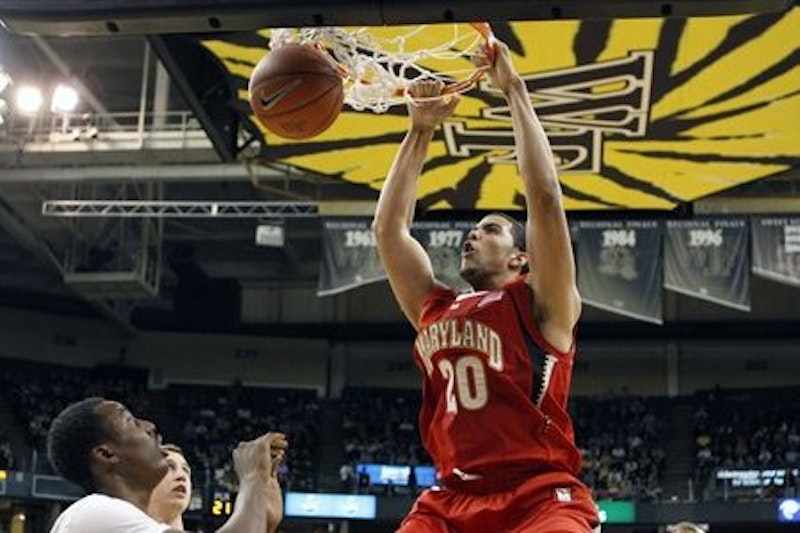 The New Jersey Nets ended a turbulent four months for University of Maryland fans and alumni last week when they selected Jordan Williams with the 36th pick in the NBA draft. Williams surprised many fans when he declared for the draft after his stellar sophomore season. There’s been speculation that Jordan Williams' decision to enter the draft hastened Gary Williams' decision to retire.

Some alleged Terps fans questioned Jordan's decision and openly rooted for him to drop in the draft. Those people seem to be using Jordan Williams as a convenient scapegoat for all that ails the program. The trouble started back in February when Maryland dropped some very winnable conference games and failed to land an invite to the NCAA tournament. Again. When Jordan declared for the draft fans quickly predicted another failed season in 2011-2012. Just days later Gary Williams retired and sent the fan base into full-scale panic mode. Lost in the angst of the past few months was the fact that Jordan Williams is just a young man hoping to fulfill a lifelong dream.

Williams wasn't a lottery pick. He won't even get a guaranteed contract. He may be forced to sit out a season if the predicted NBA labor meltdown comes to pass.  Regardless, I wish him the best on his NBA journey. I hope he proves the detractors wrong and has a long productive career in the league.

Jordan Williams may be the reason Gary called it quits but he won't be to blame if the Terps struggle next season. You can pin that on Gary. I've been a huge fan of Gary and will probably attend his Hall of Fame induction when that day comes. But the fact is that it was Gary Williams' responsibility to stock the Terps roster with talented players. Sure, losing a player as important and productive as Jordan Williams would hurt any program, but that's not Jordan's fault. It was Gary's responsibility to have the roster depth in place to absorb the loss of a player, or players, to the draft.

New coach Mark Turgeon has spoken honestly about the Terps’ lack of front-court depth. Turgeon has already stated that we may see some four-guard lineups next season. Junior James Padgett figures to step into a starting role in place of Williams. Padgett played sparingly behind Williams and Dino Gregory the past two seasons but he did come to College Park as a highly regarded recruit. Jordan Williams took to Twitter over the weekend to sing the praises of Padgett and predicted that he’d have a big season

Padgett will be joined along the frontline by rail-thin Senior Berend Weijs and sophomore Ashton Pankey. Pankey is 6' 9" but listed at just 220 pounds. He was recruited for his size and rebounding prowess. Pankey's offensive game is a work in progress after he missed all but two games in his freshmen season due to surgery to repair a stress fracture in his foot.

Padgett and Pankey could surprise their new coach and diehard fans. It’s hoped that Pankey will be fully healed and benefit from a year working with the team's strength coach. Padgett may be more a productive offensive player than anyone can imagine right now. Unfortunately, it's more likely that Padgett and Pankey will struggle, resulting in another disappointing season in College Park. If, or when, that happens just remember to direct your frustration at the future HOFer with the cushy job in the Athletics department and not at the 20-year-old at the end of the Nets’ bench.