The Curious Case of Matt Hendricks 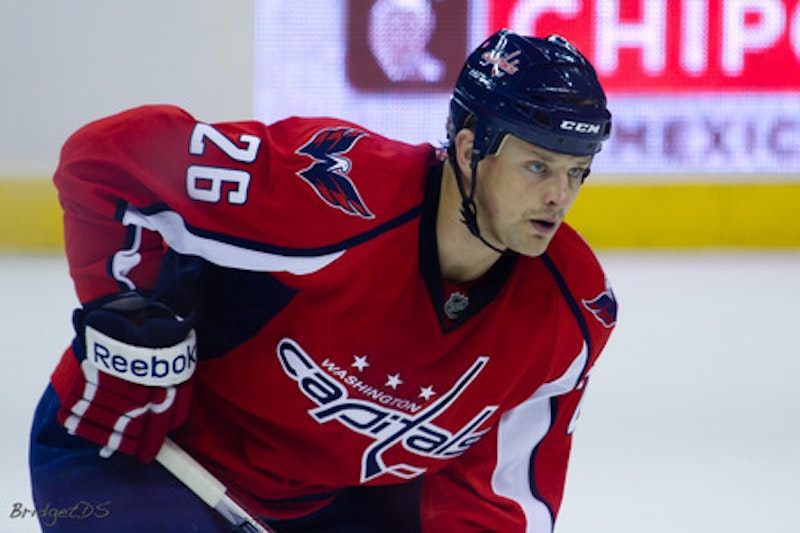 The role of enforcer is becoming a lost art in today’s NHL. It used to be that every team had someone whose job was to pose a threat to any opposing player, to keep opponents from taking liberties with the team’s best players. Slash the top goal scorer and you would have to answer physically for it. That mentality still exists, but it’s becoming more rare. Teams still have fighters, but because of the increased speed and skill in the game, fighters now must be able to play actual hockey.

The transition to all-around players began years ago. In fact, growing up, I remember following Chris Simon, who scored 29 goals and racked up 146 penalty minutes for the Washington Capitals in the 1999-2000 season. That kind of offensive skill combined with pugilism was uncommon at the time. It’s not exactly commonplace now, but it’s far from unheard of.

This year’s Capitals aren’t so lucky as to have someone as offensively skilled and simultaneously terrifyingly frightening as Simon was. What they do have is Matt Hendricks. Hendricks has 89 penalty minutes, or over a one and a quarter penalty minutes a game for the Caps this season. He isn’t the goal scorer that Simon was, but he does have a unique ability: he is amazing, nay incredible, in shootouts.

Fifteen years ago, Hendricks’ skill would have been on display during practice and that’s all. Today, games result in shootouts all the time and players like Matt Hendricks, a fourth line center who’s primary function is to keep opposing players from scoring and scare players from hitting the Capitals best players, get to showcase their skills during the games.

Except, there really are no players like Matt Hendricks. Most enforcers, even in this enlightened NHL, don’t see the ice when the games get close, let alone get picked to take penalty shots. On March 22 against the Philadelphia Flyers, Hendricks was his head coach’s choice to take the first shot. Hendricks plays on a team with Alexander Ovechkin, one of the best goal scorers in the NHL. Yet Hendricks went first. When you look at this video, you see why:

When coming in alone against a goalie, most players make about two or three moves before shooting the puck. Some make less, but mostly when skating in full speed there simply isn’t much time to make continuous moves until the goalie falls over. Hendricks somehow makes about four moves, all very good ones, before Philadelphia’s goalie falls on his face. This allows Hendricks to push the puck gently into the net. A reminder: this is a guy who doesn’t score goals. His career high is nine, yet he makes moves that the greatest goal scorers in the game would be jealous of. Like these:

The announcer counts four moves before Hendricks roofs the puck over the Rangers back up goalie. The Rangers best goalie, Henrik Lundqvist, wouldn’t have stopped that series of moves. How does a guy who makes his living punching people make moves like that? It’s a mystery.

Here’s another one, also against the Flyers last year. Notice that Hendricks’ moves leave the goalie lying on his face before Hendricks even releases the puck.

Watch Malkin, Crosby, Ovechkin in the shootout and all, while incredibly talented hockey players, aren’t as elusive as Hendricks. It boggles the mind.

One final one, where Hendricks reduces the Tampa Bay Lightning’s Dwayne Roloson to an ice-licking mess before shooting it into an open net:

The incredible thing about Hendricks isn’t that he scores on shootouts. What’s nuts is that he so thoroughly dominates opposing goalies. Further, he does something which he almost never does in a real game situation. When the puck is dropped, Hendricks is a hard-checking defensive player. He doesn’t try to score goals and maybe as a result, he doesn’t score many, but when the shootout roles around, Hendricks morphs into possibly the deadliest player in the entire NHL.

It’s like a backup shortstop in baseball being a great pinch hitter, or a role player on kick returns being an amazing option quarterback in the NFL. Hendricks is an English major with a penchant for decoding physics problems at night. It’s such a unique skill set that we’re all fortunate enough that it can be put to good use. Fifteen years ago it would have been utterly useless but, because of the NHL’s new and odd overtime format, Matt Hendricks’ skills have a chance to shine in primetime. Hendricks just might be the oddest secret weapon in the pro sports today.