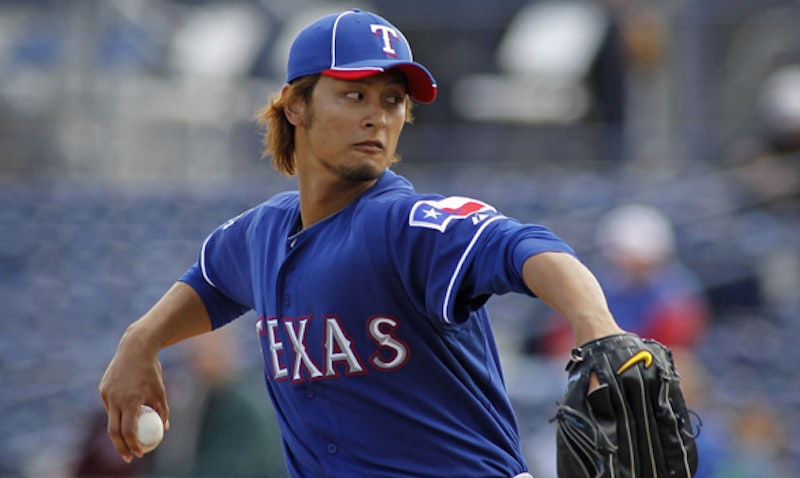 Yu Darvish may be a legend in Japan but he's still just a rookie by Major League standards. Darvish will front the Texas Rangers' rotation this season and could be a dependable number two starter for your fantasy team. Darvish, who averaged 9.5 strikeouts per nine innings in over 1000 innings for the Nippon Ham Fighters, should be an excellent source of strikeouts, WHIP, and wins. Darvish will likely be among the top 25 pitchers selected on draft day.

Tampa's Matt Moore is the best left-handed pitching prospect in baseball. The 22-year-old figures to be part of the Rays' rotation this season, and for years to come. After striking out 210 batters in 155 innings between Double-A and Triple-A last summer Moore earned a promotion to Tampa. He was lights out in his big league stint at the end of last season, as he struck out 15 batters and walked just three in 9.2 innings. Moore even earned the start and victory in the Rays' playoff opener against Texas. This guy has ace potential and should be among the top 40 pitchers drafted.

Bryce Harper and Mike Trout, baseball's top positional prospects, figure to begin the season in the minors. Harper and Trout may be fantasy studs in the very near future but they won't help you on draft day. Cincinnati’s Devin Mesoraco and Seattle’s Jesus Montero are two young sluggers who figure to contribute from day one. Montero is a bigtime power prospect who came over from the Yankees in the Michael Pineda trade. Montero was a catcher in the minor leagues but his best position will ultimately be designated hitter. He posted an impressive .996 OPS in 61 September at-bats for New York in 2011. Montero did catch in three games for the Yankees last year. Meaning he could be eligible at catcher depending upon your league’s rules. The 22-year-old could be a fantasy monster with catcher eligibility beginning this season.

The Reds’ Devin Mesoraco isn’t in Montero’s league as a power prospect but he is considered a plus defender behind the plate. Mesoraco posted a .855 OPS in 120 games for Triple-A Louisville last season. He added 15 home runs and 36 doubles. Mesoraco will likely split catching duties in Cincinnati with Ryan Hannigan to start the 2012 season. Hannigan, who was the subject of off-season trade rumors, may soon be dealt to clear the path for Mesoraco. If you miss out on the top tier of fantasy catchers Mesoraco may be worth a late round flier.

Wei-Yin Chen of the Baltimore Orioles is an intriguing fantasy option. The American League can be unforgiving to young pitchers but Chen, 26, does at least have 88 starts in the Japanese Central League to his credit. Chen, like all Orioles pitchers, is unlikely to post a high wins total but could post solid WHIP and strikeout totals. Chen has performed well this spring for Baltimore and may be worth a late round pick or early season waiver wire pickup. Go ahead and cross your fingers and hope that Chen-sanity makes its way to Charm City.

If you’re looking for potential midseason pickups, in addition to Harper and Trout, look no further than the Chicago Cubs. The Cubbies have a pair of young sluggers in Anthony Rizzo and Brett Jackson who have been tremendously impressive in Spring Training. Jackson is a potential five-tool player who could be roaming center field in Wrigleyville by late June. Rizzo is Chicago’s first baseman of the future. The future could come as early as this summer. Rizzo’s path to the big leagues is blocked by Bryan LaHair, a 29-year-old rookie who blasted 38 homers for Triple-A Iowa in 2011. If LaHair struggles in his first extended taste of the Majors look for Rizzo to get the call.