The league has an enemy in Trump, but doesn't appear to recognize its problems. 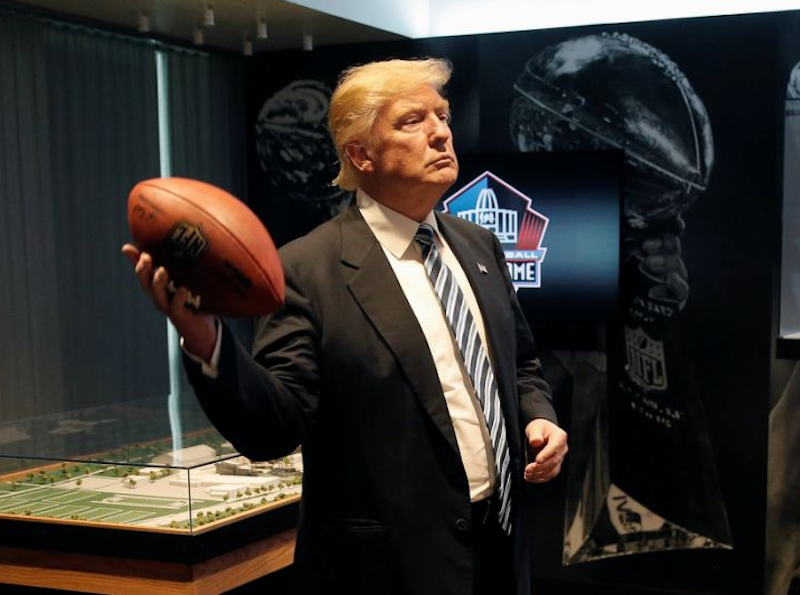 The NFL, whose franchises are valued at an average of $4.2 billion, is vulnerable. Sunday Night Football, Monday Night Football, and Thursday Night Football all saw ratings decline for the second straight season. A recent SurveyMonkey/Ozy Media poll found that 33 percent of NFL fans boycotted the league this year. Thirty-two percent stayed away in support of Donald Trump, and 22 percent boycotted in solidarity with players kneeling in an ongoing protest that Colin Kaepernick started in 2016. Trump, in his speeches and on Twitter, has condemned the former 49ers quarterback, other players taking a knee for the national anthem, and the league that allowed it to happen.

Kaepernick became a folk hero on the Left for starting the movement of NFL players protesting injustices against black people by refusing to stand for the traditional pre-game national anthem. That he's brave is undeniable, as disrespecting the Stars & Stripes on national television is a highly provocative act with potential to backfire in your face. Kaepernick’s paid a steep personal price for his decision—he's still without a job, even though several QBs with lesser credentials are on NFL rosters.

Would Kaepernick choose the same path to spread his message were he able to do it all over again? He was a rookie activist, perhaps under the influence of a new girlfriend, when he started taking a knee during the pre-game playing of the national anthem. It's not clear that he thought things through and considered the other potential messaging options available to a high-profile athlete. Ironically, the former Niners signal caller chose to aim his displeasure at a national symbol at a time when the federal government was actually investigating some of the police misconduct that was happening at the local police force level.

Polls show that while Americans support the right of players to protest, they don't like the kneeling tactic, feeling it's disrespectful. That 54 percent of those choosing to shun the NFL for the 2017 season did it to either support Trump or Kaepernick qualifies as an unintended consequence, as does the fact that 33 percent of NFL fans were upset enough to interrupt their weekly quasi-religious gridiron ritual. The NFL kneelers were obviously not protesting the NFL or hoping that fans would take a pass on the games, but they somehow managed to create two separate groups hostile to the same league that issues their paychecks. The original protest, which was aimed at police brutality against black people, ended up getting overshadowed.

It now appears that what Kaepernick accomplished with his genuflections was ending his career while simultaneously damaging the earning potential of all of his fellow players, most of whom are black. The NFL’s bleak long-term future has been foreshadowed for some time now. The Kaepernick flap might be what people point to in a few decades and say that's where the slide of professional football began. Many will scoff at the notion that the NFL juggernaut is vulnerable, but all empires come to an end, and when they begin crumbling most people can't see it happening.

Donald Trump is a wrecking ball. Once you've drawn him into swinging it, mayhem follows. When the President decided he could exploit this situation, even going so far as to call Kaepernick and his fellow dissenters “sons of bitches,” more players started kneeling in retaliation, which in turn alienated even more fans. If the protests continue on into next season, Trump will still be in the White House looking for any edge he can get. The NFL looks like a big, fat target to him. Portraying himself as the brave leader intent on restoring respect for the national anthem, is pure Trump. Also, don't forget that our current president, as owner of the New Jersey Generals three decades ago in the upstart USFL football league, was involved in a lawsuit against the NFL that ended up with the jury awarding the USFL just $1 in damages. Trump lives for money, status, and settling grudges. He now finds himself in a position to give some grief back to his old nemesis.

In December the NFL extended its contract with Roger Goodell to a five-year, $200 million deal. That's some reward for a guy who’s presiding over the disintegration of a powerful brand and two straight years of declining viewership. The contract extension provides more fuel to Trump's message that the league is unpatriotic and out of touch with its fans’ core values.

Photos of half-empty NFL stadiums were all over social media this football season. A ticket for a Redskins game was selling online several weeks ago for $4. Ten percent of the boycotting fans did it because of the football-related brain injury problem, and as awareness of the issue grows so will the NFL’s problems. Parents are increasingly reluctant to allow their children to play football. Normally when empires go into decline, there are multiple reasons involved. Often some of the problems get intertwined. Trump came along at just the wrong time for the NFL. Colin Kaepernick created something he had no intention of creating, and there's no telling how that situation will evolve. If the NFL sold stock and I owned some, I'd sell it all.