Hello to the Long Goodbye 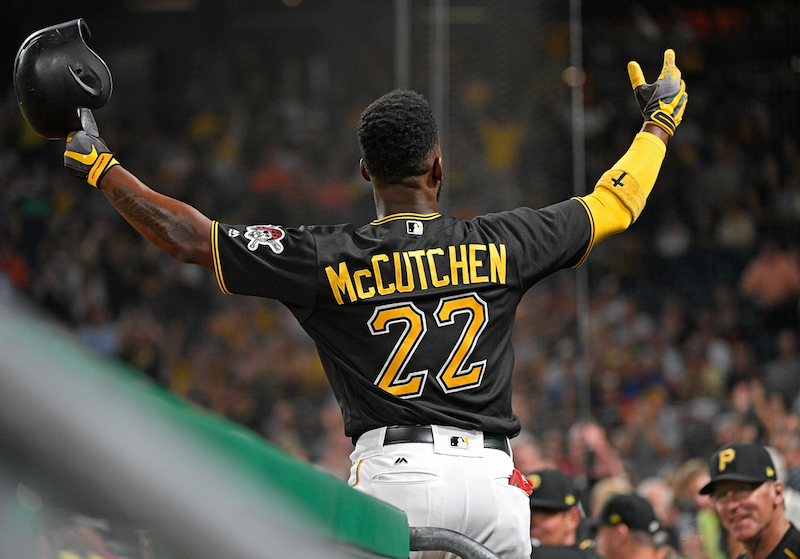 When the Australian Open appears on late night television, it’s time to think about roster construction for your favorite team’s upcoming MLB campaign. That is, if you can stop drowning in the experts penning, “Why Pirates fans are mad about the McCutchen trade” articles. When Andrew McCutchen was “dealt” to the Giants for a pitcher and bruiser outfielder, there was no anger from true Pirates fans. Moving McCutchen has been telegraphed for the past two seasons so it came as no surprise that the face and heart and soul of the franchise was shipped west. They’re all shipped west, eventually. Except for Neil Walker, he was shipped east to the Mets.

Yes, the storylines dovetailed nicely for the Ken Rosenthal types: alleged Pirates ace Gerrit Cole had been traded to Houston days before for an okay return including a bearded third baseman, sandwiching a tough loss by the Pittsburgh Steelers in the AFC playoffs. So, it was woe is yinz in the Steel City in the dead of winter. My staring into space was interrupted by all this. I’ll miss McCutchen terribly and root for him to kick ass in the China Basin and beyond. I will not miss Cole’s petulant Southern California attitude every time a teammate makes an error and he gives up his requisite gopher ball to the next batter with a T-square straight fastball down the middle.
Winter is hard enough with white-knuckle taxi driving on vanilla frosted icy roads in the Hudson Valley.

The fishtailing Lincoln Zephyr is an amusement ride that has forced me to take up playing pick-up hockey again at the indoor rink in Saugerties, NY, and the exhaustion of ice time and stick-on-puck focus rouses enough endorphins to get me through to Spring Training. After the hockey session I take 10 years to strip out of my minimal gear. Across from me, youth hockey players are dressing for their upcoming session. Kids made of rubber, mastering the Rube Goldberg inner workings of hockey’s protective exoskeleton that lies beneath the sweaters and big socks. The Zamboni hums behind us, its operator lacking the requisite cigar that all Zamboni drivers use to chomp on whilst executing their regenerative ice shaving chore that truly is The Shape of Water. They look at me and probably wonder why I’m sweating so much. I’m simply grateful to have enjoyed another hockey session without injury and knowing I still have a pretty good wrist shot.

The TV says it is 105 degrees in Melbourne as a pair of Ruskies slam the tennis ball at impossible speeds. A taxi night shift has ended quietly and several restaurant workers have collected at the only bar open late in Rhinebeck, NY. They speculate as to the return of Serena Williams to pro action, and nobody mentions the McCutchen trade. I’m relieved. In recent weeks I’d been trying to follow the prodigal Jung-Ho Kang’s comeback via winter league baseball in the Dominican. There were a few helpful websites I found but I never was able to see him live before he was cut from the team after a million strikeouts and sent back to Korea.

I was still chuckling over the recent Sunday New York Times article about the baseball analytics couple in Maryland hired to sabermetric the hell out of a Mexican League team only to find resistance and a fired manager in their inboxes. The giant photo on the front of the sports section (five-column photos are now a Times staple since half the sports staff has been fired) was of the couple watching Mexican League games from their Hagerstown couch with color temperatures suggesting the finest early work of filmmaker and sleaze raconteur John Waters. The photo looks so staged, and the lengthy piece searches for relevance even on the jump page that features another five-column photo with three more throwaway shots beneath it, including an almost generic batting helmet cubby photo that screams space-filler.

The pomposity of these numbers-crunchers knows no end. Not even the Mexican League is spared the arrogance of these dorks. Of course, toward the end of the piece, the main geek spouts boilerplate complaints about “old-school guys… confronted with new ways of thinking.” Excel sheets with probabilities and percentages are a way of thinking? These are the same people who howled bloody murder when Andrew McCutchen had one bad season for the Pirates at age 29 in 2016, like he was the first former MVP to ever have a bad season in his late prime.

The vaunted Moneyball numbers game has withered patience throughout MLB it seems. If you don’t embrace it you might as well plug your flip phone into a charger and go listen to your compact discs. The numbers-and-tech crowd oddly have a reverse Amish-style stringency that annoys beyond belief. You just want to say “information superhighway” around them and visibly type www before each web address just to piss them off.

I frequently call apps “applications” just to draw a stare or two from hipsters boarding my taxi with complaints about Uber’s shortcomings in upstate New York. As they mutter I confess to them I think the WAR stat is the stupidest, most overrated metric in all of sports or all of anything, for that matter. Value over a replacement player? Seriously? Do you mean Rick Reed and Eric Yelding during the 1994 lockout? WAR is sheer fantasy and should be discontinued on all fronts much like CNN/SI or The Sporting News print edition or the late Frank Deford’s NPR commentaries.

My daughter just turned 13 and was four when she started watching McCutchen the rookie with me on our JVC television. She has recognized his coolness and understands the journey he made from a Florida trailer park to the Big Leagues. We saw his corny proposal to his girlfriend on the Ellen show, saw the wedding photos and his brief move to right field after his sins of 2016 and the recent birth of his infant son whom the couple named Steel. McCutchen’s mom is quite the gospel choir singer and has brought the house down at PNC Park with her version of the National Anthem on several occasions.

My English wife, who comes from a family of non-sporting types, felt betrayed by the McCutchen departure. She thinks I’m too emotionally invested in Pirates baseball. “You should have seen me in 1992,” I tell her as I used presenting hands to show her the rogue’s gallery of departed former Pirates stars. From Dave Parker to Barry Bonds to Jason Bay and even Kent Tekulve. All Pittsburgh legends who were shipped like ham and eggers toward the end of their careers.

Someone said “You root for the laundry” and there’s some truth to that. As I get older I value the regular season more and cringe at the over-produced postseason. There are no more field invasions by the fans when the improbable occurs. So the Royals won the Series? Who they hell remembers that at this point? Anyone else sick and tired of the Houston hype and the Jose Altuve worship? The Dodgers should be smacked down for choking, but instead they get their “participation trophy” and all of a sudden Justin Turner is the new Ted Williams. The fact that Charlie Morton was the winner of last year’s World Series Game 7 proves once again how torturous it is to follow baseball closely. I hope Houston and L.A. lose 95 games this season. I hope the Yankees finish third.

It would appear then, as the international kids play tennis in the heat of Down Under, that my hot stove of baseball hate has some flames fanned. I welcome the heat, which will be much needed when the Pirates open the 2018 season on March 29 in Detroit, against the Tigers. Last year in Detroit on March 29, the high temperature was 46 degrees. The early openers are part of the Collective Bargaining Agreement which gives the players more days off during the season, and allowing the World Series (the winner predicted two years in advance by the former weekly Sports Illustrated) to conclude before November arrives.