Reflections on a time when masked wrestlers ruled the American South. 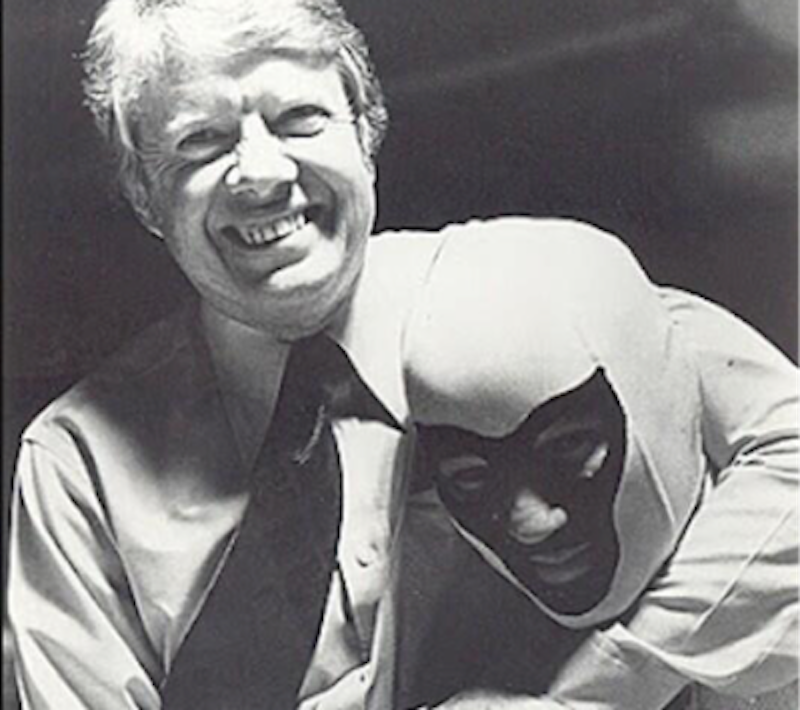 Scrutinize that photo of former Georgia Gov. Jimmy Carter playfully headlocking Mr. Wrestling II. Today, it’s nigh impossible to understand how popular this masked guy, who originally wrestled sans mask as Johnny “Rubberman” Walker, was with Carter’s mother and other Georgians during the late-1970s and early-1980s. I didn’t understand, either; I grew up in Southwestern Pennsylvania and wouldn’t experience Southern-style wrestling until my family relocated to North Carolina in 1989.

“Number 2,” as some fans affectionately called him, first appeared on my radar screen thanks to a series of picture stories in the various out-of-date “Bill Apter Mags” like Pro Wrestling Illustrated and Inside Wrestling that stockpiled in the waiting area of the Mon Valley barbershop where my father and I went to get our ridiculous Brylcreem-enhanced ducktail haircuts.

I wondered about so many of these weird regional guys, with their intimidating masked visages and curious, ill-defined backstories. How did their masked work stack up against the WWF squash matches on which I had cut my teeth as a lad? And what of the masks themselves? Other than the anti-Heenan family “Machines” gimmick, already on the wane because the team’s masked “Giant Machine,” the incomparable Andre the Giant, was transforming into a slow-moving Easter Island statue of a human, the WWF during this period didn’t boast any masked wrestlers of significance. The Conquistadors, I suppose, did a fine job of losing matches, but back then I knew nothing about how their gimmick was intended as a lame parody of the lucha libre style, and my parents refused to order the ‘88 Survivor Series in which they performed a not completely insignificant role.

So anyway: why was Mr. Wrestling II masked?

The answer was that Johnny Walker, like masked stars Dick “The Destroyer” Beyer and Tim “Mr. Wrestling I” Woods before him, happened to be an amateur grappler with a face for radio and a so-so body who didn’t get over with the fans until somebody had the bright idea to ask him to work under a hood. That wasn’t the storyline answer, though.

"I’ve been asked time and time again why I wear the mask," Number 2 says in an interview about his upcoming Georgia Championship Wrestling match against the villainous, mask-wearing Assassin #1. “I had difficulty getting matches at times, and I took the opportunity to put my mask on, and I now find it easier to get the matches I like to have."

This is true in a certain sense… but not in the sense that Number 2 intends it. What he’s trying to say, it seems, is that he’s such a high-end grappling badass in real life (and under the hood) that, were opponents to learn his civilian identity, they wouldn’t dare challenge him. But that’s not the case. Walker, though a great performer and worker, wasn’t a top-tier amateur badass on the order of Tim Woods or Dick Beyer...though, hey, whatever makes a middle-aged dude with okay-but-not-great grappling credentials come across as intimidating to his teenage fanbase is fine by me.

His opponent, Assassin #1 (Jody Hamilton), is similarly beefy, middle-aged, and unimposing—and, sans mask, equally unremarkable. Clad in the same style of boxy off-the-rack suit my enormous father would wear when he prowled the single-acre expanse of our used car lot, the Assassin grabs the microphone and proceeds to say that Number 2 is full of crap, that the only reason he couldn’t get matches was because he wasn’t willing to take on tough customers such as the Assassins. “Your great ability is suspect as far as I’m concerned,” Hamilton claims. He continues: “I wear a mask simply because I do not want the notoriety that would be involved with being the athletic personality and television personality that I am. When I go to a restaurant and eat, I don’t want a bunch of fans coming up to me and asking me for autographs. The mask affords me the opportunity to lead a private life.”

"Having this mask means everything in the world to me,” Number 2 replies curtly. “If I lose my mask, I’ve lost everything. I intend to hang on to it and there’s no one who’s going to take it one way or the other."

So here, at the 2:52 mark, we have both of the tried-and-true rationales for domestic mask-wearing right on the table. Mr. Wrestling 2 is a hero for whom the mask is a vague symbol of his masculine prowess (but not a lesbian vampire-fighting superhero in the manner of El Santo or Mil Mascaras). The Assassin, meanwhile, is a no-nonsense ass-beater who doesn’t want the fans encroaching on his private life. He’s also way better on the mic, ceteris paribus, than Number 2.

From here, the interview degrades into a lot of bargain bin name-calling and shit-talking. Number 2 picks it up a notch, taking it personal and making it personal when he reams out the Assassin around the 3:40 mark. After the Assassin goads him about his temper, remarking that a “bad temper denotes a feeble mind,” Number 2 shouts back that his “temper keeps me going, you puss-gut” and challenges the Assassin to an impromptu match.

The Assassin demurs in a legalistic and composed manner, but finally winds up hauled into the ring by Mr. Wrestling 2, whereupon he’s beaten to a pulp until the Assassin #2 enters the ring to administer a brutal retaliatory beating to Number 2. Once they’ve subdued Walker, they blade him—through the mask, no less!—and thereafter attempt to determine his true identity. Steve Keirn, a regular Zelig of the squared circle during the 1980s, eventually makes the save, but not before the Assassins have managed to seize possession of Number 2’s sacred totem.

The video then cuts to a shot of Number 2 alongside his storyline mentor Tim “Mr. Wrestling I” Woods. Number 2, adored by the fans for his violent and rage-filled promos (“my temper keeps me going, you puss-gut!”), unloads on the Assassins with both barrels: “So help me God, I’m going to get you and I’m going to rip your mask off and your head along with it! You don’t do this to me! I’m Mr. Wrestling II! I do wear a mask and I’ll wear it as long as I goddamn want to!”

Woods, who was working only part-time at this point, steps up in his distinctive all-white mask to offer his support for longtime friend and occasional foe Number 2. “You’re never going to have to worry about another man coming up behind you again,” he assures Mr. Wrestling II, who in his haste to reclaim his stolen honor has already stormed offstage. In the final 30 seconds of the clip, we’re treated to some vintage footage of Wrestlings I and II in street clothes and white masks curb-stomping the Assassins, a savage attack that culminates with the removal of one of the hated villains’ masks. Order in the masked universe of Georgia Championship Wrestling has been restored, dear friends!

But what the heck does it all mean? Walker and Woods seem every bit as nasty and uncouth as their opponents, who have at least articulated a semi-legitimate reason (privacy) for wanting to wear their masks. Walker originally claimed that he was working under a hood because no one would wrestle him otherwise, but by the end he was claiming he wears a mask because he’ll damn well keep doing whatever it is that he wants to do, mask-wearing included.

As far as domestic mask-wearing explanations went, this was as good as it got. The masked grapplers in the US were never “one with the mask” in the same way that their mystical, larger-than-life counterparts in Mexico and Japan were. Only Dick “The Destroyer” Beyer, whose best and highest-grossing years came in All Japan Pro Wrestling, really achieved that status.

In the US, the primary function of the mask was to allow popular competitors such as Ric Flair, Bill Watts, the Fabulous Moolah, Junkyard Dog, and Dusty Rhodes to evade the imposition of various “I quit” or “you’re suspended” stipulations that accompanied an important and often quite controversial loss. These stories are always time-limited; American fans have never had the patience for someone like Mil Mascaras, an athlete so intimately associated with his mask that he allegedly even showered while wearing it.

Instead, we fans want the masks to come off, with the consequence that almost every masked angle revolves around discovering the hooded wrestler’s true identity. Unmasking a wrestler who was only ever over when under the hood usually resulted in temporary gangbusters business, but afterwards most of these guys failed to draw money without the hood (unless the guy under the mask was, say, Ric Flair, he was just some nobody!) and would eventually leave the territory to re-mask.

Walker and Woods were exceptions—for the most part, their masks stayed on—but even then many fans secretly wanted them to come off, mostly for reasons just as obscure as why Walker had insisted on wearing his. Number 2 wore a mask and he’d wear it as long as he goddamn wanted to, thank you very much! 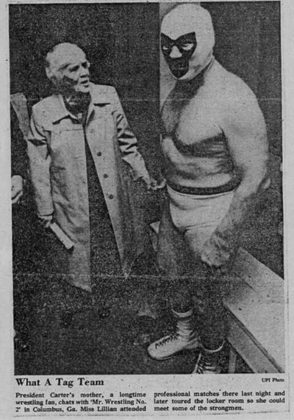