Memories of the War 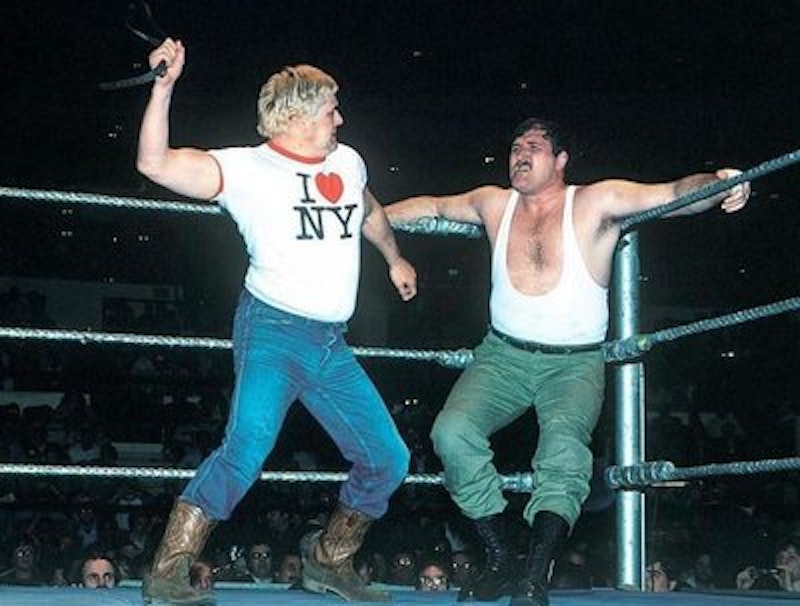 For some reason you don’t see this legendary match until early 2003, even if your wrestling message board buddies have been talking about how great it was since forever. An “alley fight” in the WWF between beefy Bob “Sergeant Slaughter” Remus, the villainous Parris Island drill sergeant, against not-so-”Pretty Boy” Pat Patterson.

By the time you watch this, you’ve heard all the rumors about how Pat Patterson sexually harassed midgets and handsome ring announcers and other people. Patterson, the privately gay and openly tough-as-nails wrestler who could work a match like none other. You’d never seen him wrestle. He was probably better when he tag-teamed with “Crippler” Ray Stevens back in Roy Shire’s San Francisco promotion, but you don’t know. All you see is a sorta fat, sorta in-shape (that instantly recognizable way all former athletes gone to seed start looking in late middle age) dude wearing an “I <3 NY” t-shirt that he has tucked, for no obvious or essential reason, into skin-tight jeans.

You wonder: is this how you dress for an “alley fight,” for the match that supposedly inaugurated, perhaps even more than those gross-out Sheik-Mark Lewin bloodbaths from the 1970s, the hardcore style of the 1990s and beyond? Who cares. Now out comes Sergeant Slaughter, one of 20 or so real humans who was lucky enough to have a G.I. Joe action figure modeled after him (comics writer Larry Hama and pro footballer William “Refrigerator” Perry were two others).

The Grand Wizard, a forgotten but essential manager in the history of WWWF/WWF, leads out Sergeant Slaughter, who is clad in loose khakis and a wifebeater. The build-up for this bout was considerable, but it’s hard to wrap your baby 20-year-old brain around the pre-Hogan WWF goings-on. Why, for example, was the world title still held by amateur wrestling star Bob Backlund? Why wasn’t it on an awesome villain like Slaughter? Why is Pat Patterson, aging and worn down and looking like Tommy “Wildfire” Rich’s gross uncle, still headlining cards like this one? Why is he in cowboy boots? Why why why?

At the 3:55 mark, Pat removes his belt, then whips and strangles Slaughter with it. They’re really selling their hearts out, making every move look real. I can’t believe how much I believe it. Is this the same federation that gave us an endless array of squash mashes and stiff Backlund title defenses?

From 6:00 to nearly 7:00, they writhe in agony on the mat. At 7:15, the belt is wrapped around Patterson’s mouth like a ball gag, and then, per announcer Vince McMahon Jr., “Slaughter starts working on that ‘I <3 NY’ t-shirt.” Meaning he rips it off and chokes Patterson with it. Why a t-shirt instead of Patterson’s belt or his own belt? Ah well. Just go with it.

Patterson’s fortysomething man belly is really amazing, but the guy is also clearly in shape and  still able to go. At 9:30 he gets some decent elevation on a second-rope “cowboy boot stomp.” It’s easy to forget how drawn-out these matches were, as well as how old troupers like Slaughter and Patterson excelled at selling fake pain.

Slaughter finally begins to bleed, possibly from a real bite but most likely from a concealed razor blade, at 10:30. The WWF/WWWF never got as bloody/nasty/hepatitis C-filled as the Southern wrestling promotions, but this one’s about to get ugly. More slow kicks and punches, but my goodness, the selling! Why does this look so good? These guys are just out-of-shape slobs and yet they’re as compelling as eulogies given at the funerals of beloved politicians.

After some hot and heavy action on the ring apron, Slaughter is busted open at the 13:00 mark. He’s stumbling around the ring better than prime-period R Flair, and his face is as bloody as prime-period Dusty Rhodes’ kisser would get. This is the real deal, and announcer McMahon can’t stop gushing about it, pun intended.

Slaughter blasts a great low blow at 14:00 that Patterson sells as if it were the German cannonball that sunk the Titanic and took precocious toyboy Leonardo DiCaprio down with the ship. At around 14:40 there’s a beautiful close-up of Slaughter’s badly damaged mug. He’s “tore up from the floor up,” as they (whoever they were) used to say.

Patterson, from 14:00 on, is beating the holy hell out of Slaughter. Slaughter’s stumbling, bumbling—where’s the drama here? Yet by 16:00 you’re back into it. You wouldn’t be surprised if Patterson stuck a gun in Slaughter’s mouth and blew the Sarge’s mother-loving brains out. It would’ve seemed fitting, given the violent context of the match.

Patterson’s doing all of this with the grim resolution of Christ lugging the cross up to Calvary. “This place is absolutely bonkers,” McMahon says at 17:25, and he’s not dramatizing for effect. The Madison Square Garden crowd is “popping” (it’s crazy to imagine a real, mainstream Northeastern audience watching this kind of trash and “marking da fuck out”), and when Slaughter exits the ring at the 18:00 mark and refuses to return, the boos resound like so many call-backs on a mediocre rap album.

There wasn’t much action left for Patterson as a full-time grappler after this victory, though both he and Slaughter would hang around the sport for three more decades. In fact, Slaughter would headline Wrestlemania VII, representing Iraq in a terrible Gulf War-related story with “Hulk” Hogan, and Patterson as a backstage analyst would plot out the finishes of dozens of classic matches while allegedly harassing a fair amount of the on-camera talent. How much of that anti-Patterson gossip was merely just homophobia is unclear, but “Pretty Boy” Pat chalks it up to that in his autobiography. There’s something very admirable about Patterson as a performer: he refused to pander to the crowds by utilizing an effeminate “gay gimmick.” No, he just acted every match like it was the match of his life, as this one very nearly was. It’s certainly the only Pat Patterson match I’ve ever studied in such detail, I’ll tell you that.