The NFL Draft is a Meat Market

If you've got a conscience, objectifying others in the normal course of business is an unpleasant thing to do. 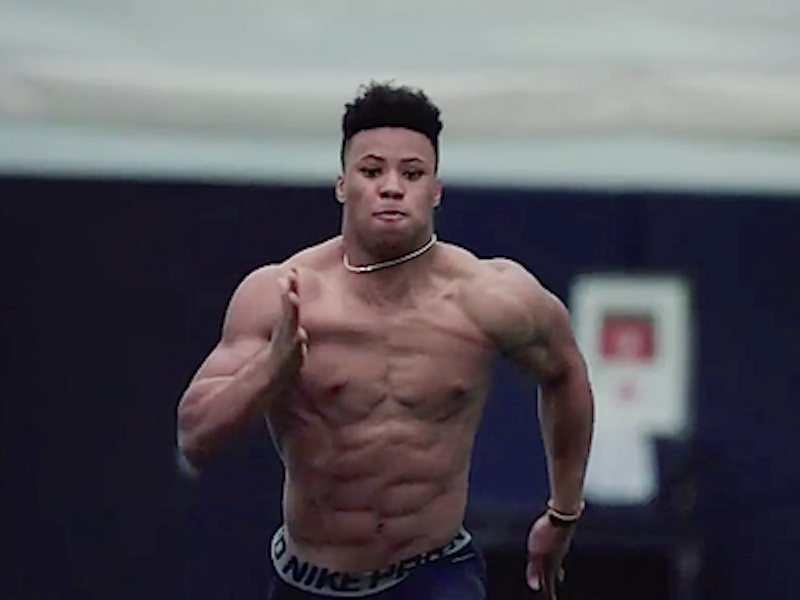 After graduating from college in December 2001, I accepted a position as an assistant manager for Abercrombie & Fitch. The employer was loathsome—all of the claims alleged in Gonzalez v. Abercrombie & Fitch Stores were true to my experience—but the worst part of the job was meeting on Sunday mornings with the rest of the management team to grade the appearances of the minimum wage-earning, merchandise discount-receiving brand representatives. That's right: we sat around and assigned grades, A-F, to the hapless souls we'd recruited off the sales floor to wear and fold what were supposedly that season's hottest articles of clothing.

Some of the other managers were merciless—a result, no doubt, of the sort of arrogance that often accompanies a position of minor authority. Women with figures that weren't even the least bit "full" were derided as obese. One of our better folders, a male of East Indian descent, was described as "stockroom quality" (meaning he should be kept in the back, where he could pass his time applying security sensors to the merchandise). A young African-American male with bright green braces was a source of enduring controversy. Although our most enthusiastic worker, he was despised by upper management, who wanted him removed from the schedule as soon as possible.

"He's not collegiate. He's not quality. What he doing out there?" the regional manager once asked.

"Folding," I replied. "He's the only person we have who is any good at that, including me."

So for weeks I closed the store by my lonesome, as all of the "collegiate" and "quality" employees proved far more unreliable than the brand rep with the green braces. I’d dodge his calls as best I could, but since he lived nearby, he'd often arrive unsolicited, only to find me working far harder than I would’ve liked. On more than one occasion, he worked off the clock to help me close.

"We just don't have the hours for you," I’d assure him, in the process feeling about as lowdown and despicable as a person could possibly feel.

After giving my two weeks' notice, I learned from a pair of co-workers that I graded out as a solid B, for what it's worth. "But hey, you're totally too smart to be working here anyway," one of them added.

I retell this story for two reasons. First, Abercrombie & Fitch was, and perhaps still is, an awful company. I guess it’ll be filing for bankruptcy soon, which is where it and the hermetically-sealed indoor malls where its stores are often located should’ve gone a long time ago. Second, if you've got anything resembling a conscience, objectifying others in the normal course of business is unpleasant. On the incessant objectification of women, much has already appeared elsewhere, written by individuals not approaching the subject from the position of gender, race, and socioeconomic privilege that I possess. But I do know what it's like to be other-ized (i.e., "man's desire is the desire of the other") after having acquaintances and colleagues affix labels to me such as "buff guy," "totally my type," "a real musclebear," "so wholesome," and so on. The recognition that someone, anyone, happens to be desiring you as a means of gratifying their own base urges is disconcerting.

I recall a tidal wave of articles published in the wake of the Steven Soderbergh film Magic Mike, most asking more or less the same thing: are men now being objectified in the same ways as women? This question, while far from irrelevant, doesn't strike me as the best question to ask... and even then, it's not a question worth asking about Magic Mike or any subsequent example of beefy cheesecake (the so-called "Golden Age" of bodybuilding in the late 1940s and early 1950s would be a far better place to commence such an analysis).

This, thank the fates, is an essay about male objectification that has nothing whatsoever to do with Magic Mike or Magic Mike XXL—which I haven't seen but which I’ve been assured by friends is a perfectly fine film, perhaps even an improvement on the original. It’s instead about one of the principal but largely overlooked means of male objectification in our society: the endless 24/7 sports scouting now adjunct to all major fields of collegiate and professional endeavor. Its fullest flowering is the NFL Draft, an event that occurs but once per year yet is covered non-stop, as if it were always mere moments away. The NFL Draft's official website is a multimedia hootenanny, consisting of thousands of clips of brawny men running 40-yard dashes, bench-pressing 225 pounds for reps, and jumping as high as they possibly can.

When reading through its list of prospects, one encounters descriptions of players similar to this one. "Thick arms eat up ball carriers coming into his path. Quick, small dancer's feet and a bit of short-area speed to spin off blocks inside and follow plays across the field. A bit dense and doughy around the midsection. Potential for weight problems has dogged him throughout his career. Huge hands—can palm a basketball. Gorgeous acceleration off the block. Always-pumping tree trunk thighs allow him to overpower opposing blockers."

What, I wonder, are we to make of that sexualized description? Some would contend that because the recipient of such high praise may soon become a very wealthy man, he, like Kate Upton et al., is "asking for it" (whatever that means). By making himself eligible for a once-in-a-lifetime opportunity to develop chronic traumatic encephalopathy, he has given license to analysts ranging from Mel Kiper, Jr. (who has played just as much football as my cat has) to Skip Bayless (ditto) to inveigh against his "doughy body" and "lack of intangibles." And the owner of this huge body will be covered and, uh, uncovered (literally: athletes are made to strip down at the NFL Combine to ensure that accurate measurements of hands, hips, etc. are taken) on a loop as we enter the bleak period in early spring when the only things to report on are the NBA (who cares?), the NHL (is that even real?), and college hoops (irrelevant until the Sweet 16 and irrelevant again after the Final Four).

For someone who’s consumed sports programming in a thoughtless, uncritical way for decades—as mere filler to occupy life's thousands of empty hours—the realization of how dehumanizing this process of talent evaluation is, and how close it is to the wretched labor I once undertook for Abercrombie & Fitch, came as a shock. And it's not just pro athletes: Creepy "scouts" follow around teens and pre-teens in the hopes of discovering an individual who will grow, like a prize pig or cow, into yet another over-hyped "next big thing" (George Dohrmann's Play Their Hearts Out offers one particularly compelling example of this twisted reality).

There are, I suppose, certain redeeming aspects of athletic competition, but I'm convinced that those are primarily personal: the thrill of you yourself bench-pressing 400 pounds, running a six-minute mile, or dunking a basketball. These are genuine achievements that, even if exceeded by many others, leave you with a sense of satisfaction. The rest of it, this ceaseless watching and critiquing ("look at the body on that guy," "what a monster down in the low post," and so on), strikes me as born of ressentiment: a frustrated coach and frustrated fans living through one or two fine pieces of beef who gambol and cut-block and swim as they too would have, if only they had grown to 6'8" or run 4.4 40-yard dashes or posted some other arbitrary exercise statistic. And what of these young Apollos, these he-men with the strapping physiques and the can't-miss talent, as they make their way through careers that end inevitably in the pain of early retirement? Well, most wind up as frustrated and broken-down husks of the men they never were but many others thought they could have been. My father was one of these “rotten old jockstraps”—his words, not mine—and I never stopped feeling sorry for him.

Instead of concerning ourselves with superhuman running back Saquon Barkley’s “can’t miss” pro potential, perhaps we ought to focus on our own rec league performances and 5k runs. By ceasing to objectify the lives of these putative sports demigods, we might draw closer to our own potential, however limited that potential proves to be.