Fathers and Sons of the Squared Circle

Here’s the life story of a wrestler who existed in my head and somewhere out there in cyberspace, but nowhere else. 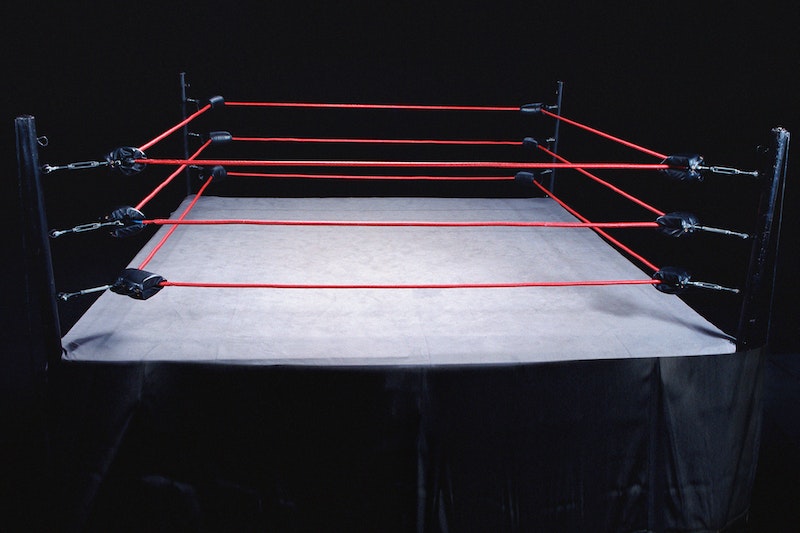 Eddy Jacks Jr., imitation son of an original star from the glory days of pro wrestling, appeared in his last match in 2008. He was 37. Ever since he’d finished playing college football and washing out of the Canadian Football League, he’d been touted as a Next Big Thing. Not the Next Big Thing, because he had a fair number of flaws, but certainly one of many possible Next Big Things.

It could’ve happened a bunch of times, such as when he won the Simply Canadian Rasslin’ Association (SCRA) Northern Lights Title at 24. The Internet chatroom smarks, obsessed with four-star matches and the Japanese “strong style” of working, made a big deal out of his victory. Here was this kid who could flat-out wrestle, rewarded by a top-heavy, veteran-driven company with a poor reputation for handling young talent. His father Eddy Jacks Sr., the original Eddy Jacks, was overjoyed. The imitation Eddy Jacks’ friends, most of whom were trying to enter the business themselves, were insanely jealous. He looked to all the world like a future star. What could go wrong?

Everything, of course. Junior’s first couple of title defenses were pretty lifeless, which was tragic given that they served as co-main events for the promotion’s weekly television show. His big feud with Craig Valance, a bland English technician who’d served as the federation’s default Intercontinental champ for over a decade, generated zero heat. Junior was wrestling then as an All-American blue-chipper, and Valance was doing a typical European heel gimmick, and for some reason those styles didn’t mesh. Their work was competent, but their performances lacked sincerity. When their storyline ended at WrestleWar XII, the imitation Eddy Jacks lost cleanly in the center of the ring. He’d held the belt for exactly eight weeks, and now he was finished.

The funny thing was, Junior’s promo work actually got better after he left the Northern Lights title picture. The SCRA brought his washed-up father out of retirement and had him serve as his son’s abusive trainer, a role that fit the fat man as comfortably as an old shoe. The Jacks Family found itself in a crowded tag team division. The Black Watch, a high-flying tag team from Scotland, was locked in an epic year-long feud with the Baddest Thangs Running, and because the original Jacks had some residual heat with one of the Thangs, they spent the better part of their run putting them over at house shows.

But people liked the Jacks Family, and their Mutt-and-Jeff “Jacks Family Values” vignettes kept them going long after a string of hernias finally forced the original Jacks to the sidelines. Junior would go out to the ring, screw everything up, and then the original would hit his son’s opponent with a pair of brass knuckles. There was a Television Title reign mixed in there somewhere for the imitation Jacks, but that strap had been so degraded by innumerable title changes that it was reserved solely for the comic relief guys. Jacks Junior, who hadn’t been booked to look strong in years, excelled at playing a loser—and eventually that’s what everybody came to think he was.

Five years after he entered the SCRA, Junior’s contract expired. It wasn’t renewed. No reasons were given, and none were needed. Imitation Jacks had once been, in the words of the original Jacks, “like a hot dog on a bun: on a roll,” but now he was about as valuable as last week’s supermarket circular. His old man, whom Junior mostly but not completely detested, was no longer able to perform in any capacity and had hung up the boots for good. Senior would occasionally drag himself out of the house for a one-off appearance with his kid in some Rust Belt palookaville, but his cash value as an attraction had dwindled to nothing, too. The difference between the original Jacks and the imitation was that the original had been the undisputed World’s Champion back when that still meant something, even if he had only held the strap for a month, and the imitation hadn’t been anything at all.

For a while, Junior chased those ever-decreasing bucks. $300 to headline a show in Kalamazoo, Michigan for Great Lakes Championship Wrestling. $1500 plus travel costs to lose to J.W. “Hoss” Maines in a barbed-wire match in Japan that saw Junior’s eye knocked clean out of the socket. Other engagements resulted in worse injuries, ranging from a torn rotator cuff (never surgically repaired) to the amputation of two toes. And so it was at 37 that the imitation Jacks, already woozy from the semi-synthetic opioids that were now his mother’s milk, botched the landing on a clumsy moonsault and wound up with a fractured hip.

Was it in vain? The best years of the imitation Jacks’ life were gone, spent chasing the legacy of an original who in all honesty hadn’t been that good in the first place. But the original had been a wrestler, which was the only thing that Junior had ever wanted to be. Junior was a wrestler too, by some accounts an especially gifted one, but now he wasn’t anything anymore. He’d wanted to wrestle since he was five, started at 22, and never participated in another match after turning 37. Like most of his colleagues, he didn’t have insurance, so his receding years would draw him ever deeper into the void.

“I always kept coming to crossroads,” he told me a couple of weeks ago. “I always found myself on the cusp of something. But by the time I got there, the train had already departed. No matter how early I left, it was gone. I kept missing happiness by a few minutes each time. By the end, I wasn’t even sure what I had wanted to be in the first place.”

What does it mean, you have to ask yourself, to be so close to something that you can taste it, yet still so far from it that nobody would believe you were ever there? It was similar, Junior felt, to his college football experience: you always believed you were lying to people when you told them you had done it, like you were fudging the record merely by reporting it wie es eigentlich gewesen, “how it had really happened.”

In his wildest dreams, the imitation Jacks explained to me, he would’ve wrestled a match so pretty that no critic could ever think past it. It would be the match of which no greater could be conceived; and at the precise moment he lost, his shoulders pinned to the canvas for the “long three,” he would vanish into thin air. There would be nothing left of him, no trace of his having existed at all. The match would linger in the minds of the fans who’d witnessed it, but they wouldn’t know what it was that they saw, not really. Their memories would amount to nothing more than a digital picture of a xeroxed copy of a stenciled mimeo of a carbon copy of this golden original, an event that, in the words of another famous wrestler, could be “often imitated but never duplicated.” He would’ve been his own man, at last, and gone forever.

But forget that childish fantasy: Junior keeps on keeping on, his dream deferred shriveling up like a raisin in the sun. “I’ll be alright,” he assured me. “I mean, how the hell else can I be?”