Joe Biden has enhanced his performance over the years, but doesn’t much like it when steroid users do likewise. 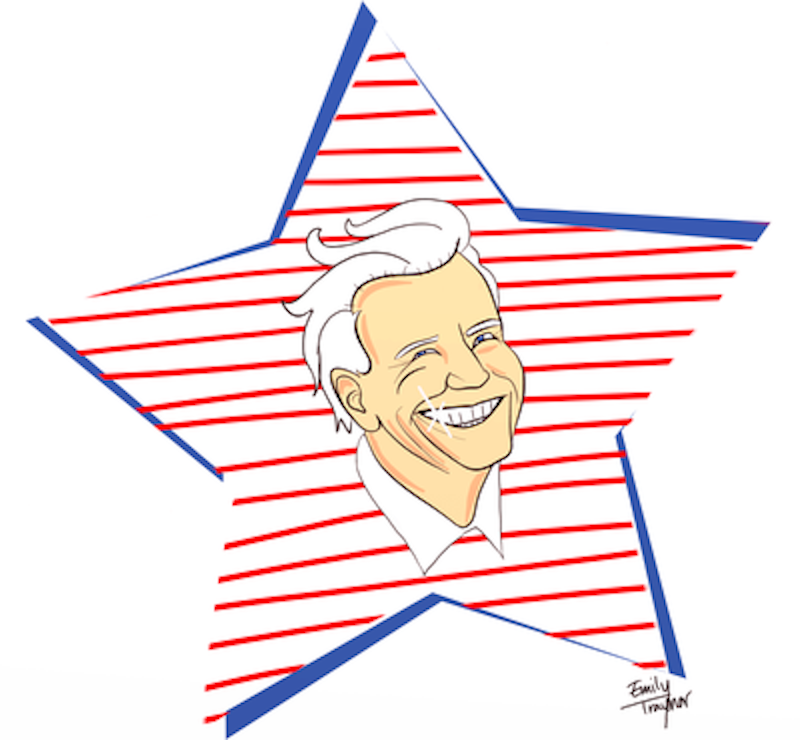 When Joe Biden makes his bid for the White House in 2020, he'll be 77. No one will say much about that, though, because Biden has a lustrous tan, shiny white teeth, and wispy, corn-colored hair. Like well-preserved Ronald "Dutch" Reagan before him, Biden has a certain kind of embalmed perma-youthfulness to him, and the pancake makeup he slathers on only furthers the illusion that he's a spry, vigorous Man of the People. He's not, of course, but who cares?

"Diamond Joe” has always seemed like 25 percent of a legendary Democratic politician: he's got a great presence and can work the room. Talking Points Memo posted an amazing video of Biden in action. Watch that sequence carefully: so much of Biden's appeal rests on his performance enhanced teeth, tan, and hair.

There's little else in his record that stands out besides this legacy of enhancements. He enhanced his performance during the '88 Democratic primary by cribbing from old Neil Kinno and Bobby Kennedy speeches. He enhanced his academic record by claiming a higher rank in his law school class than he actually had and to have earned degrees he didn't possess. And then, perhaps most unforgivably, he utterly botched the Judiciary Committee hearings on the Supreme Court nomination of Clarence Thomas, thereby inadvertently enhancing the performance of a man who was himself extremely troubled in a number of respects.

But hey, you know what? Joe Biden hates those nasty steroid cheats. We know this because he has offered one ringing denunciation after another of those wretched men who dared do anything to outperform him on the baseball diamond or the gridiron (he was, it seems, a back on the Delaware Blue Hens football team for two years, though he never won a varsity letter or, even more surprisingly given his own history, claimed to have won one).

He's not alone in his contempt for these terrible villains; lamenting the further cheapening of our always-cheap, always-disreputable athletic spectacles has been something of a cottage industry since Teddy Roosevelt first inveighed against the squalid, bloodthirsty nature of college football. In an unparalleled display of political heroism, Biden went to the barricades in 1989 (and against the recommendation of the American Medical Association) to have anabolic steroids reclassified as Schedule III controlled substances.

He said the following: "The illegal use of anabolic steroids is a major drug abuse problem in this country. Steroids are dangerous drugs that threaten the physical and mental health of hundreds of thousands of young people."

In 2004, when the Controlled Substances Act was further amended to remove the thorny requirement that an anabolic steroid had to actually "increase muscle growth," Biden was that bill's sponsor, too.

Theoretically, anything could now be deemed bad and thereafter banned, and for no reason at all. Because I said so. Lawmaking in many instances is necessarily arbitrary— most of us are okay with ages of consent and speed limits, at least in theory —but it isn't capricious (18-year swings in the age of consent by county, for example, might cause some big problems).

This revised 2004 CSA, however, is both. But don't take my word for it: dehydroepiandrosterone (DHEA), which most studies have concluded is at best a placebo, is on the list! With regard to his frivolous, fruitless hearings on the sullying of America's national pastime by its naughtiest drug cheats, Biden said the following:

“Many believe we should have more important things to investigate than Major League Baseball. To a certain extent, I agree: This is clearly not the No.1 issue facing Congress. But congressional hearings on baseball's steroids scandal are hardly a trivial pursuit. Our national pastime faces questions more serious than the legitimacy of modern-day home run records. High school athletes watch their sports heroes bend and even break the rules, and they believe their own success may depend on emulating the pros.”

Little John Boy is going to start gulping down dianabol tabs (the pill of choice for steroid ingénues) in a feverish and ultimately doomed quest to catch up with "Big Mac" McGwire and the other home run heroes he admires. He'll fail, he'll experience "roid rage,"  he'll have a heart attack. QED.

Say it ain't so, “Tailback Joe!” When Biden made his push to classify anabolic steroids as controlled substances in 1989, the American Medical Association responded with an extremely detailed report of its own, the principal point of which is excerpted here:

“Anabolic steroids have an accepted use in the treatment of several medical conditions, including certain anemias, hereditary angioedema, and breast cancer. Moreover, anabolic steroids can be used safely under medical supervision.  [Instead of adding steroids to the CSA]...one appropriate and effective approach to [controlling misuse of steroids] is by increasing the criminal penalty for sale of steroids without a prescription.”

All kidding aside, this is a subject in which I'm extremely invested. Readers see "anabolic steroids" in whatever article they're skimming and the knee-jerk reaction is to relate that to "bad guys," to "cheaters," and so forth. We engage in similar denunciations when we see those digitally-enhanced Cosmo covers; it appears that, in our willingness to entertain any moral outrage whatsoever so long as it enables us to feel something (but not too much, and assuredly not anything that shakes us to the core of our being or forces us to remake society or anything else that's so dangerously 1917-y), we can't wait to decry the wretchedness of our coarsened and relativistic society.

The 1992 wrestling steroid show trials, the so-called "Zahorian Affair,” warrant mention.  In that situation, performers working at the mercy of steroid-using WWF magnate Vince McMahon were supplied with anabolic steroids by George Zahorian, a friendly neighborhood physician who would apparently write anyone a prescription for anything (Zahorian was a "croaker," in 1950s drug slang). Their decision to "juice," in light of the national mania for Schwarznegger-ian muscle mass and a standing order from McMahon to keep the title belts on beefcake types, was perfectly reasonable. They were labor; McMahon was capital.

These bodies of theirs, you have to understand, are working bodies, mere tools of the trade. If Robert De Niro underwent sex reassignment to really "sell" a role, there's a good chance he'd win at least one or two of the lesser acting awards for his courageous choice. Even the great steroid fighter Joe Biden, as I mentioned above, has enhanced those parts of his body—his teeth, hair, and complexion— that contribute to his greatest skill, which is walking around a room and shaking people's hands.

There are genuine issues of goodness or badness to worry about in the world. Most involve very rich people grinding up the bones of very poor people to make their daily bread. They don’t involve athletically gifted semi-somebodies injecting themselves with various substances in an effort to tear off a tiny piece of the giant money pie. They do at least tangentially involve Joe Biden, who chose to enhance his profile by scoring cheap political points at the expense of baseball-playing semi-somebodies whose only real "crimes" appear to be that they were much better at sports than Biden ever was. To paraphrase the Kansas newsman William Allen White, that's all right.  There is absolutely nothing wrong with such a state of affairs.

"Every prospect pleases and only man is vile."