Powerful Yankees, Slightly Powerful Red Sox and Everyone Else 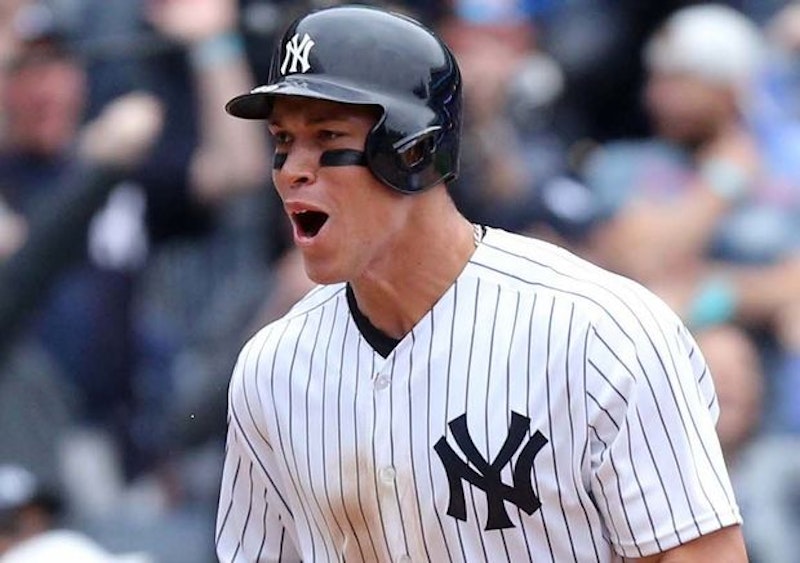 When the Miami Marlins’ Jeffrey Loria sold the team at the end of the 2017 season, most fans were happy. When he announced the sale to a group that included Derek Jeter (only four percent, but the face of the group), the “Jeter’s next step” stories filled the baseball media. When Jeter announced the Marlins would trade their veterans and hit the reset button, an ugly scenario formulated in the imagination of all-non-Yankee AL East fans. Before we went through the coldest “hot stove” in recent memory, Giancarlo Stanton’s name whipped around the rumor mill. Would he land in San Francisco? Would he join the NL Champion Dodgers lineup? St. Louis, filling the slugger’s hole left behind by McGwire and then Pujols? In the end, Jeter and his co-owners sent Stanton to the Yankees for two relatively unknown prospects and Starlin Castro. This was a salary dump, and for those believing everything boils down to Red Sox-Yankees, a Jeter-wrapped gift that elevates the Yankees over the Red Sox, assuming Stanton stays healthy.

The team that led baseball with 241 homers in the juiced-ball 2017 season added the most powerful bat in the game. The 168-homer Red Sox (27th last season) would play an interminable waiting game with slugger J.D. Martinez. What a dismal way to follow the MLB winter. The already up-and-coming rival lands Stanton on top of an already loaded lineup. Then Red Sox fans waited with baited breath on a late-blooming outfielder/DH that went berserk after the Tigers traded him to Arizona last summer. From mid-December through late February, the stalemate ensued. It was clear super-villain/super-agent Scott Boras demanded five years for the 30 year-old Martinez. The Red Sox demanded provisions that would cover prolonged injury stints. Martinez missed the opening of the 2017 season with a foot issue that lingered longer than expected. Eventually, the injury insurance was granted. The five years (and $122 million) were granted. The Red Sox have a clean-up hitter again after a year of less-than-inspiring fourth-place-in-the-order slugging. On to the previews, in predicted order of finish.

New York Yankees: The over-under sits at 94.5. The health of Stanton is a legitimate concern. Since his first full season (2011) he’s played more than 123 games in a year just twice (2014, 2017). Some of the injuries were pure bad luck (hit by pitch in face and hit on the hand/wrist), and a few came toward the end of summer, when it seems his huge frame (6’6”, 240 lbs.) wore down. Playing in the humidity of Miami probably didn’t help. Regardless of the previous years, Stanton was ridiculous in July and August, smacking 30 homers in only 54 games. Was the ball juiced? The general consensus among those that write intelligently about MLB: Yes, Indeed. Will it be juiced again? With all the negative attention, probably not so obviously. In addition, one of baseball’s best hitters parks (Arizona) will now use a humidor, which is predicted to have an even more dramatic effect than the humidor used to equalize matters in Denver.

Zooming out, Aaron Judge and Stanton will hit homers regardless of what type of baseball MLB tosses onto the field. The AL East’s pitchers have to hope that Stanton puts extra pressure on himself and doesn’t deal well with chilly April games, and that Judge reverts back to chasing pitches off the plate. Even if they both underperform, the Yankees lineup is more balanced than it has been in years. Aaron Hicks, once a top prospect with the Twins, showed great patience at the plate and plays a solid center field. Gary Sanchez’ power is real. First baseman Greg Bird has been hindered by foot injuries, but shown flashes of becoming a true three-outcome (HR, BB, SO) hitter. The lefty takes clear advantage of the short right field porch. Shortstop Didi Gregorious put up his best offensive season (.796 OPS), and Brett Gardner went 20-20 with a nearly identical OPS (.778). As if they needed more depth, the Yankees added young doubles-machine Brandon Drury to play third, and aging Neil Walker (another lefty who pulls the ball) to cover second base.

The Yankees will be relying on Sonny Gray, Masahiro Tanaka, and Luis Severino to anchor the rotation. The back end, C.C. Sabathia and Jordan Montgomery, leave them vulnerable. New York’s bullpen (Chapman, Robertson, Betances, Kahnle, Green) will pick them up whenever needed. The AL East has been a hyper-competitive division for a while now. This year, with Baltimore and Tampa Bay likely taking steps backward, the wins will pile up at the top.

Prediction: 96 wins, an epic division race, and at least 225 homers.

If you followed the Red Sox closely last year, you may have started expecting runners on second to get stranded there, waiting for help that rarely came. Of course, that’s an exaggeration. The team still scored 785 runs, 10th in the majors. On the other hand, they were 22nd in team OPS. That discrepancy was noticeable. Opposing pitchers didn’t fear the lineup. A sequence of single, walk, strikeout, single (run scored) is much less demoralizing than single, strikeout, strikeout, home run (two runs scored). The home run revives the crowd. And the 29 other MLB teams seemed aware that fly balls were going farther than they used to in 2017. Numerous players openly described adapting their swings in order to launch lower pitches. Jose Bautista was ahead of his time.

Starting with the absence of David Ortiz, it may have been the case that every young Red Sox player who has yet to land a long-term contract (all of the “B” fellows) pressed too much without the presence of Big Papi. In the Boston pressure cooker, without the release valve that was Big Papi, or the veteran Pedroia (who may not play 120 games in a season again), the young Red Sox bats had some lean stretches. They dealt with minor injuries. Perhaps Betts will never again hit for as much power as he did in 2016. He’s said as much in interviews. He knows his strength is doing everything well: he’s not Giancarlo Stanton or David Ortiz. It will likely take two-three more years for Andrew Benintendi to become a legitimate power threat. He turns 24 in July.

Back to the idea of the Red Sox and homers. Now they’ve landed another slugger, Martinez, who will take some of the pressure off of everyone else… assuming he handles the pressure of his own massive contract in a media market often waiting for shiny new free agents to fall short of crazy expectations.

Now let’s discuss the potentially dominant starting rotation. Potentially being the operative word. Chris Sale’s electric first four months were shadowed by a similar issue he’s had throughout his career: an end-of-year slump that involves giving up lots of those homers. During Spring Training, Sale has described a personal goal of working more economically and wasting fewer pitches (subtext: less concerned with the strikeouts…which are also sexy, and which he tallied 308 of last year). Sale’s lone postseason outing against Houston surely left a sour taste in his mouth.

David Price’s elbow betrayed him early on in the season. With lots of rest, he was excellent out of the bullpen in September and against Houston. Price’s return to dominance may be the biggest wild card in Boston’s quest for a postseason berth.

Drew Pomeranz was Boston’s best starter during the second half of the season (8-2, 3.01 ERA, only eight homers allowed in 83.2 innings). Without that performance, the Red Sox likely would’ve succumbed to the wild-card spot, rather than hold on to the AL East crown. Pomeranz becomes a free agent next winter. Pomeranz has missed some of the spring with “forearm tightness.” Though that can be an indicator of a significant elbow injury, it seems this one is a mere flexor strain, whatever that is. Count me as one of those fans expecting to lean heavily on Pomeranz’ success if the Red Sox are to win the division this year. Pomeranz isn’t expected to miss more than one or two starts at the beginning of the year.

After the top three, new manager Alex Cora will be crossing his fingers that high-upside lefty Eduardo Rodriguez has seen the last of his knee-problems following off-season surgery. Rodriguez is expected back in the rotation by May. Rick Porcello has had a tumultuous ride over the course of his first three seasons in Boston. In 2015, his peripheral stats showed he wasn’t as bad as his 4.92 ERA indicated. In 2016, he won the Cy Young, going 22-4 with a 3.15 ERA that was better than his expected ERA (FIP 3.40). And then there was last year. Leading the league in hits allowed (236), homers allowed (38) and general disappointment (unquantifiable), Porcello was more like Poor Cello. Ironically, it was the first season in which his expected ERA (4.60) matchup up with his actual ERA (4.65). The fly-ball revolution was not kind to Porcello, who relies on a heavy sinker and pinpoint command. After Rodriguez and Porcello, the Red Sox have knuckleballer Steven Wright as an option, though he isn’t fully healthy either. Without Pomeranz and Rodriguez, the Red Sox will lean on lefty Brian Johnson and journeyman Hector Velasquez early on.

Two of the higher-end relievers Boston acquired over the last two years have barely pitched. Carson Smith (via Seattle) and Tyler Thornburg (via Milwaukee) would add much-needed insurance to the 7th and 8th innings for Boston. Closer Craig Kimbrel is as close as one could hope to a sure thing. The wacky fireballer Joe Kelly had his best year in Boston, though he struggled in some big August games against the Yankees. If healthy, Smith and Thornburg would give Boston plenty to surround Kimbrel, Kelly, Matt Barnes and Brandon Workman.

Prediction: 95 wins, an epic division race and a wild-card berth.

The last three-team previews will be succinct!

Toronto Blue Jays: Josh Donaldson doesn’t have the surrounding cast he did two years ago. Justin Smoak reinvented himself last year. Even if he repeats, the outfield is weak, and the pitching needs too many things to go right. Prediction: 84 wins.

Tampa Bay Rays: Longoria long gone. Tampa has hit the reset button once again, but this team can’t overachieve like the Rays have done so often in the last decade.

Baltimore Orioles: What a sad situation in Baltimore. Manny Machado is so good. And so close to leaving. The pitching just can’t keep up with Boston or New York. The hitting is homer-heavy and not well-balanced. At least Jonathan Schoop is fun to watch. Dylan Bundy will strike you out. Andrew Cashner will not.