Baseball Fan: Why I Can’t Do This Anymore 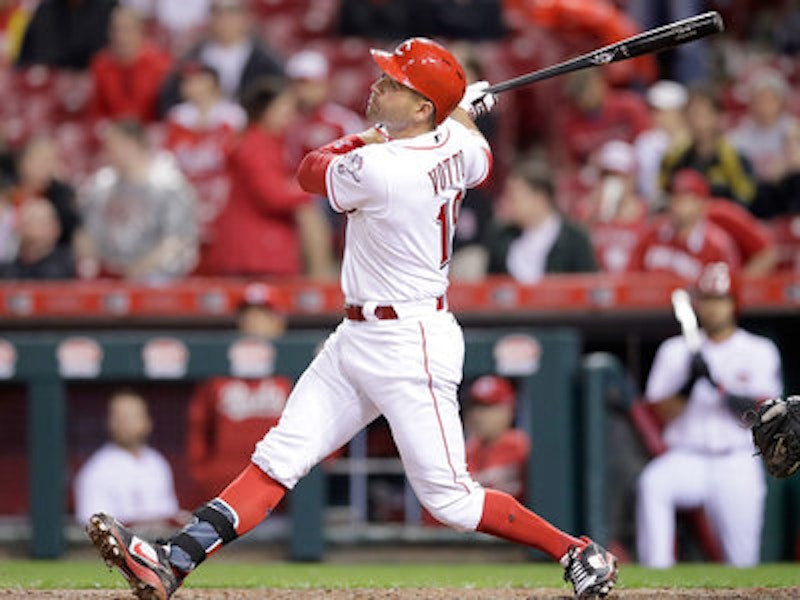 In an effort to solve the annual problem of predicting the upcoming MLB season, a ritual I’ve both detested and relished since 1972, I’ve turned to a 1977 textbook published by Thomas Books called “Leisure Counseling; An Aspect of Leisure Education.”

Here’s the lede of the front cover blurb highlighting its mission: “The responsibility of filling large blocks of time—a problem introduced by increased automation, shorter working hours and the waning work ethic—has become a cumbersome burden for many people. This book is designed to aid counselors, therapists, and park and recreation personnel working both institutional and community settings who want to help their clients use their free time more effectively. Personality and needs assessment, values clarification and special problems of alcoholics, parolees, the mentally retarded, psychiatric patients and retirees are examined…”

In other words: the Cincinnati Reds defeat the Cleveland Indians in the 2018 World Series. Joey Votto, perhaps the most dangerous hitter no one’s heard of, suffers from depression and has dealt with severe anxiety over the past several campaigns. This upcoming season, Votto hits .400 and leads his team to the promised land. He will become the white, Canadian Muhammad Ali of baseball. Some will see him as the Mayor of Kooksville, others as a messiah wearing a first baseman’s glove bearing fame and fortune in the Queen City not seen since the days of Antonacio “Tony” Perez Rigal, a Hall of Famer who hails from Cuba and was an integral cog in The Big Red Machine. All hail Joey Votto.

The Ohio-centric October clash will piss off most of the baseball community, as it should, especially when the vaunted Yankees go down and the Cubs implode and the After School Special script writers in Houston come up blank when the game calls for crucial scenes not involving Charlie Morton or Brian McCann. I’m not touching the playoff scenarios or the Wild Card “win probabilities” that have become sort of a Jonestown Flav-or-Aid for many online writers to consume. Crutches made of numbers and stats no longer interest me. Stand on your own two feet.

Russian hackers will no doubt quickly subvert the unearned arrogance already seeping from the self-vaunted and unfortunately-named “The Athletic” sportswriting website that’s hawking actual “subscriptions” in this day and age (what is this, Grit?). In this day of fancy-free Internet non-compensation, the word appalling comes to mind if I’m supposed to enter credit card numbers in order to read suddenly sacrosanct hacks from failing regional dailies all over the land. No thanks. I’ll take outdated and inaccurate Bleacher Report feeds any day over yet another predictable Ken Rosenthal sermon about Mike Trout or Bryce Harper and their chalk predictions. The failed ESPN “vertical” Grantland with its spittle-covered grave wasn’t lesson enough? The bleary-eyed boredom of “Sports on Earth” doesn’t drive you away? The outright douchery of VICE Sports still gets a click or two?

In contrast to the annoying vapor screens with unloadable graphics on mobile devices, this lovely hardback version of Leisure Counseling tome came to me in a moment of winter weakness in front of a free bookshelf at the Dorian Gray-style Rhinecliff, NY Amtrak facility, a crumbling structure along the Hudson River that could’ve been used for various scenes from The Natural if the film had been shot in Eastern New York instead of Western New York. It sat unclaimed for weeks next to copies of Dennis Lehane thrillers and unread Ian McEwan paperbacks and self-help books.

As a taxi driver I stood all winter clad in Carhartt trousers over long-john thermal underwear in front of an ancient steam radiator waiting for transportation-hungry train passengers disembarking at Rhinecliff. Staring into the high windows and cobwebbed arches, I waited for Andrew McCutchen to be traded and listened to porcine Mets fans talk about Adrian Gonzalez and the hope springing from the preponderance of Juan Legares.

Taxi customers varied with the ebb and flow of winter travel. Perhaps it would be an odd trio of British dandies bound for the winter lodges of Phoenicia ($80 fare) or the more typical cadaverous senior citizen couples bored with the Harvard Club and destined for a weekend of heavy gravy and silty red wine at the Beekman Arms Hotel in Rhinebeck ($8 fare). Don’t matter to me, I’m Travis Bickle in a Pirates baseball cap. I’ve got a metal Roberto Clemente baseball card wedged into the fake wainscoting on the front dashboard of a bone white 2006 Lincoln Zephyr with dodgy sway bars but pretty good acceleration. I know what time the liquor stores close and whether of not you can get bubble tea within a 10-mile radius of your destination. I have Band-Aids, an NYC TAXI Bic lighter for your cigarette and maps of area hiking trails if you must be so bold, but please don’t.

After the hype of Jose Altuve and the racially insensitive hairdo shortstop guy in Houston last October, I’ve found that I relish the regular season now more than the post-season. A charming three-game sweep in June in Kansas City (interleague scourge) or a series win in Arizona is much more interesting to me than which closer will be used for four innings in Game Two of a Divisional Series played late at night God knows where. I vow to spend this regular season upcoming counting mound visits by moribund catchers (I like to call the new rule The Jorge Posada Rule because if David Cone or Andy Pettitte was pitching, he would make up to 50 tediously long mound visits over six innings to make sure he knew what cologne the hurlers were wearing when they wanted to opt for a 2-0 slider.)

And enough with the analytics and the PECOTA and the WAR. Just stop already. Pick me out a winner, Bobby, my homemade bat has cracked during a crucial late season game. I hope McCutchen hits .300 in San Francisco. They are starting early this season because the players told their union they want more off days. March 29 will no doubt be frigid when the Pirates pull into Detroit for yet another Interleague Season Opener. At least the Mets get a traditional foe in the Cardinals at Citi Field on the same day. And when the always low-budget Bucs arrive in Steelers and Penguins country for their home opener, they go up against the Coen Brothers-sponsored Minnesota Twins for another non-rivalry, who-cares home opener that will warrant 30 seconds and several Fargo jokes on ESPN’s SportsCenter. Suddenly, every Pirates fan is Joey Votto but without the actual Napoleon Dynamite “skills.”

Back to the Leisure Counseling text, if you please. Page 94 has a subhead asking “What are The Four Temperaments?” In 1951, some dude named Karl A. Lund figured out four temperaments that made up individual personality. These four concepts also sum up every baseball franchise among the secret Society of Wealth that is MLB. Here they are, in a nutshell of groupings.

Temperament 1: Melancholic. “Appears to be slow in movement and thought” because of a “sombre mood, without actually being physically heavy” according to the book. This would include the Detroit Tigers, Oakland Athletics, San Diego Padres, Chicago White Sox, Seattle Mariners, Atlanta Braves, Kansas City Royals, Tampa Bay Rays and Texas Rangers.

Temperament 3: Sanguine. “Are extroverts, desiring to come into contact with all that is new and living fully in the present.” These would be your Washington Nationals, New York Yankees, Houston Astros, Chicago Cubs, Los Angeles Dodgers, Anaheim Angels, San Francisco Giants and Arizona Diamondbacks. It all makes west coast sense.

Temperament 4: Choleric. “Has a firm, concentrated, compact body... capable of standing up to the most incredible endurance tests… courageous, often to the point of being foolhardy.” That would be your Milwaukee Brewers, Cincinnati Reds, Colorado Rockies, Cleveland Indians, Boston Red Sox and Miami Marlins (Expect Derek Jeter effigies to burn in Little Cuba by Flag Day.)

As for outdated figures that are managers: Despite upgrades in Philadelphia, Gabe Kapler will be an outright disaster. Buck Showalter might retire this year when Manny Machado is dealt at the deadline. Ron Gardenhire’s crucifixion in Detroit will gleefully be overseen by the Centurions of SABRE, Clint Hurdle will no doubt be fired in September once the Steelers training camp has opened as will the C-list guy in Queens who’ll somehow keep David Wright on the roster despite his needing Stephen Hawking’s now-available wheelchair to prepare for a game.

Enjoy the regular season, fans, and I’ll see you at the napkin-free MLB postseason vomitorium as usual.