Reflections on a foreign variant of wrestling. 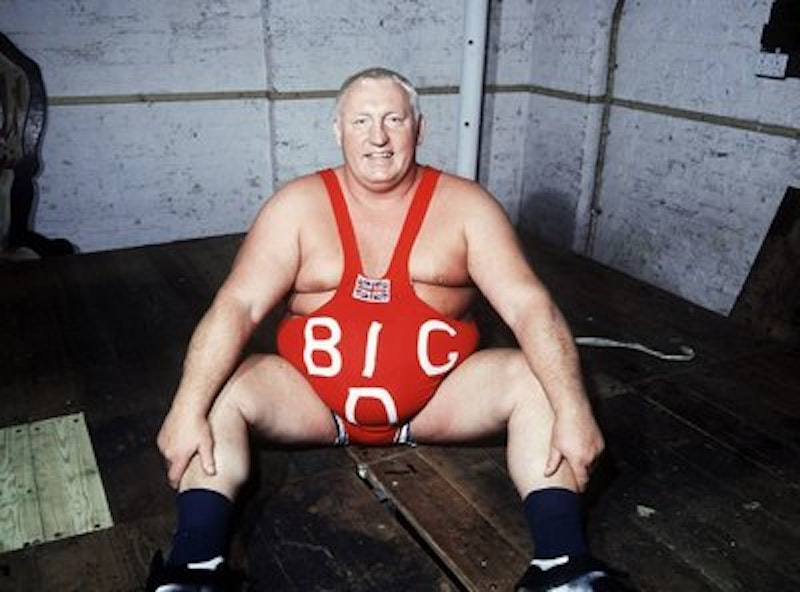 “Once I transitioned away from hardcore and into the British style, that’s when things picked up for me,” explained long-time indie wrestling star Chris Hero in an interview for RF Video. “And when I finally got the chance to go to England to wrestle, it was everything I expected.”

No offense to the portly yet astonishingly agile Hero, who currently wrestles in NXT as the under-utilized Kassius Ohno, but that smacks of the way Jack Kerouac conceptualized Mexico: more as symbol than something real, and impossible to grasp even when actually visiting. Hero could no more have conceived of England’s illustrious grappling history during his bucolic Ohio boyhood than Canuck Kerouac could’ve comprehended the fullness of Mexico from his childhood vantage point in Massachusetts. By the time they had gotten where they wanted to go, it was already too late: whatever new things they saw soon became indistinguishable from what they had seen in their mind’s eyes.

This is a subject near to my heart, I suppose, because we’re now 20 years from 1998—the year Hero and I both graduated from high school. 1998 was the year, after much trying on tape-trading forums, that I secured a copy of a VHS tape featuring some World of Sport wrestling matches from the UK. I’d already purchased, at great personal cost to a kid whose father was at the time “too poor to pay attention,” taped compilations of matches from Japan.

These tapes were always overpriced, paid with money orders from cash scrounged or stolen from various wallets, and the stories that unfolded on them were incoherent. There was no context: suddenly there was a match with Gary Albright, then one with Tatsumi Fujinami, then another with Steve Williams. Matches from the early-1980s involving Dynamite Kid were mashed together with those of his early-1990s epigone, “Pegasus Kid” Chris Benoit. It was nigh-impossible to piece any of it together, aside from the obvious fact that the Japanese matches were faster-paced and better-worked than their domestic equivalents.

The British wrestling I received was even worse: a grainy video of obese superman “Big Daddy” Shirley Crabtree belly-bumping with the even fatter Giant Haystacks, some early footage of Dave “Fit” Finlay sporting a moustache and working through a series of brisk wristlocks and double wristlocks, a few sloppy-bodied guys from the 1970s who reminded me of my maternal grandfather trading rest holds, the masked wrestler Kendo Nagasaki engaged in some weird pre-match ritual. This, I marveled, had set me back $20?

Never mind. I was always behind the eight-ball in that regard, the acquisition of trivial knowledge, because I’d really only lived through two eras of wrestling: the post-Wrestlemania II era in the WWE, and the mid-1980s heyday of Jim Crockett Promotions wrestling on TBS. This meant that I knew the great manager Gary Hart from his work with the J-Tex Corporation—Terry Funk, Dick Slater, Buzz Sawyer, and the incomparable Great Muta—but wasn’t familiar with his prior involvement with World Class Championship Wrestling in Dallas.

So when I waded into the worlds of wrestling fanfiction and wrestling discussion boards, I realized the nerd-space had already been colonized by people who were older or at least more worldly with regard to their wrestling knowledge. The old people knew the regional promotions like the backs of their hands and the rich kids had their New Japan and Universal Wrestling Federation tapes catalogued in sequence. I was scraping towards a rudimentary awareness of the whole, albeit for no real reason than that I was tremendously lonely and took consolation in watching these musclemen trade holds. It seemed like true understanding was a long way off.

In time, I came to understand the British style. I learned that grapplers like Jackie Pallo and Mick McManus, lumpy bodies and all, worked tight matches in a small ring built around near-constant holds. Closed-fist punches were carefully policed and done only by the bad guys when the referee wasn’t looking; legal forearm smashes and “European uppercuts” provided the bulk of the fisticuffs. Unless you were a huge monster such as Big Daddy or Giant Haystacks, you were expected to do kip-ups, bridge out of holds, and execute wrestling rolls. The athletes’ bodies were largely devoid of steroidal bloat or even much in the way of weight-room conditioning—Finlay, William Regal, Dynamite Kid, and Davey Boy Smith all beefed up after they came stateside—and the ethnic gimmicks, jungle men and tiny “Orientals,” reflected a national tolerance for gross racial caricature that went far beyond what I encountered growing up in the American South.

Simon Garfield’s excellent oral history The Wrestling, possibly the best wrestling book ever written, filled in the remaining pieces after I acquired a copy of its second edition in 2007. It had originally dropped in 1996 to widespread acclaim in the UK, given that the British fondness for wrestling remained strong even after World of Sport  had left the ITV lineup amid declining ratings and a desire among the Oxbridge set to remove wrestling from television altogether. “They ran opinion polls and there were ten million people who wanted wrestling back on,” Giant Haystacks assured Garfield.

Such expertise, at least on my end, was hard-earned. I’d spent the better part of 20 years running down a working knowledge of wrestling in Japan—including worked-MMA variants like Pancrase and Pride—and, to a lesser extent, England. I marked out for the likes of Men’s Teioh, Mitsuharu Misawa, William Regal, Finlay, and their ilk, because they were thought to do things the “right way.” They were “hard men,” they “worked stiff,” they made it “look like a shoot.” Watching Regal, drug-addled by his own later admission, gobble up Sting at the Great American Bash in ‘96, Larry Zbyszko on WCW Saturday Night in ‘94 and Chris Benoit at the Brian Pillman Memorial in ‘00, brought joy to my heart.

Great for me and my heart, I suppose. I reveled in all this secret knowledge during wrestling’s brief renaissance during the Steve Austin heyday and when it declined into bra-and-panty matches and Batista main events. I read every wrestler autobiography released, sought out every DVD shoot interview, all the in hope of goodness knows what. You certainly couldn’t write about this for a mainstream audience—David Meltzer and PWTorch and those places had that on lockdown, and they served up delectable fare to the smark diehards. Nor could I write about this subject in grad school while I worked on my Ph.D., which ended up being about education finance litigation and not the pumped-up bodies of 1980s WWE stars. The latter topic would’ve been novel for its time, the mid-2000s, but as David Shoemaker noted in a Grantland essay headlined “Why Wrestling Matters,” nobody was allowed to write about this subject in a serious way, meaning in a way that amounted to something less than an abstruse university press monograph but something more than the matter-of-fact trade literature Meltzer and Wade Keller produced with metronomic regularity.

Now in 2018, everybody’s written a “wrestling and politics” article. Anyone who watched a second or two of the Attitude Era has tied themselves into this massive social network for wrestling takes, which is good for people like Michael Elgin, Keith Lee, Cody Rhodes, Kenny Omega, Matt Winchester, Austin Aries, and the many other misfit grapplers who are earning decent livings outside the WWE’s purview. But it’s also sad, because every Millennial observer becomes an instant expert on any new wrestling thing that hits, and somehow the wrestling collective is instantly an expert on the same new things.

So, yes, of course the English wrestling was worth studying. Who doesn’t stream NJPW? Who isn’t subscribing to the Highspots video network? The rush to produce content about this subject is ceaseless, but aside from those who were there from the beginning, much of it’s oddly sophomoric. Admittedly, it’s less bad in terms of wrestling, where any couch potato can watch 10 hours of World Class on the WWE Network and become an adequate pseudo-expert, than it is in fitness, where every relocated Brooklynite who’s performed a 45-pound push press at a CrossFit “wod” is entitled to wax philosophical about the subject.

I suppose I shouldn’t care as much about this, but I have little else to care for. I never read comics, watched wrestling, or lifted weights in order to accomplish anything but pass the time during a long day’s journey into night, so the emergence of these subjects as matters of serious public consideration—often written about by Millennial writers stumbling upon them, as an anthropologist might an aboriginal tribe—has left me ambivalent. It’s good to see such things talked about, but to see them talked about so poorly, when I, an old and tired hand, could at least speak whatever truth remains in my body? And what am I to feel when some near-novice goes viral after a red-hot take, Lauren Duca-style, in the process sidelining and silencing many people who have spent years immersing themselves in various obscure activities?

Mind you, I’m no slavish, Tom Nichols-esque admirer of expertise and bemoaner of its demise. The degrees and certifications I’ve obtained have little if anything to do with the actual body of knowledge I’ve developed. But let’s face facts: for those of us whose histories are scarified on our Xennial bodies, whose truths were hard-earned in a world that changed radically between 1998 and now, there remains a tremendous fear that it was all for nothing, that 500 words of puffery arriving at the right time and in the right publication could wipe it away, that it wasn’t worth the html it was printed on.

The British wrestling wasn’t what I expected, pace Chris Hero, but neither was anything else.