Robert Griffin’s a superstar, but can his team reach the playoffs? 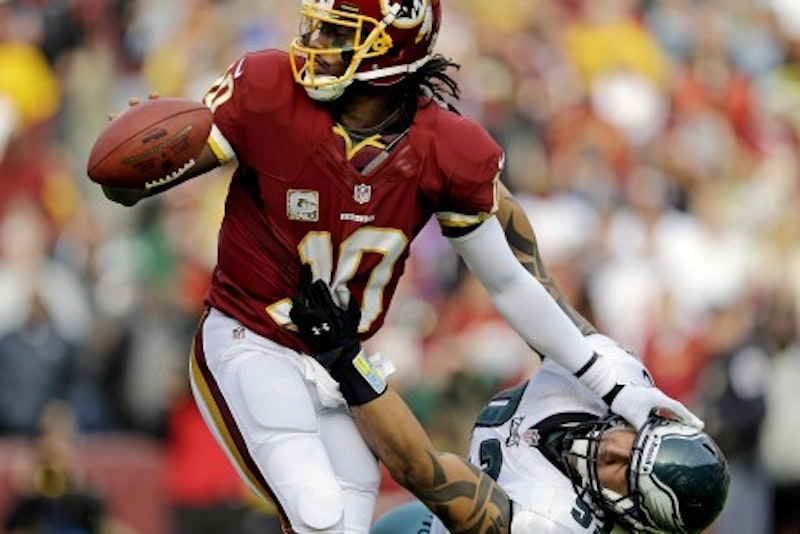 At 5-6, the Redskins are pretenders in the NFC. Their defense is in shambles, they have myriad injuries, and the same team of coaches, authors of 5-11 and 6-10 records over the past two seasons, remains in charge. And yet, things are looking up in DC. Why? The Redskins won two games in a row.

It’s odd, because at 5-6, the Redskins are playoff contenders according to the Washington DC media, yet the team they just beat, the Dallas Cowboys, also 5-6, are not according to its local media. For example, here’s Dave Sheinin of The Washington Post: “Those eight touchdowns came over a span of just five days, as Griffin and the Redskins shredded the Eagles and Cowboys to put themselves back in playoff contention at 5-6.”

And here’s Mike Jones from the Post’s Redskins Insider blog: “The Redskins have forced their way back into the playoff discussion.” Contrast that with the Dallas Cowboys who, again, have the exact same record. Rick Gosselin of The Dallas Morning News had this to say: “[The] loss on Thursday all but signals the death knell for the faint playoff hopes of the 5-6 Cowboys.”

That sounds ridiculous. And it is. But it’s at least explainable because the salient point isn’t where you are, but how you got there. The Redskins amassed a 25-point lead against Dallas. You wouldn’t know it to read the media coverage, but they almost blew it. Washington’s awful defense not only let the Cowboys back into the game but Dallas shrunk the lead to seven points with eight minutes remaining, plenty of time to finish off what would have been a great comeback. It didn’t happen, but it could have, and if it had, you can guess how the story would’ve changed. Sure the team’s records would have been different but it’s only one game.

It’s not completely wrong. Specifically, Redskins quarterback Robert Griffin, III is really, really good. What’s even harder to comprehend is that, based on the aging curve, and his better understanding of NFL defenses, he’s likely to get better. But how much better can he get? Last week against the Eagles his quarterback rating was perfect. Perfect! This week against Dallas it was off 20 points, but that put it at 138, and it’s the you’re-the-greatest-quarterback-ever-in-history-if-you-keep-it-up level.

The Redskins’ two straight wins combined with the positive publicity generated by Griffin fuels perceptions that Washington is getting better. So the question becomes, are they getting better or is this just a two-win blip by a mediocre team in the course of a mediocre season, even if one with a single outstanding player? It’s easy to get caught up in the excitement generated by the wins and Griffin’s play, but the truth is probably the latter. Washington’s stats are unspectacular across the board with one exception: Griffin and the offense. Special Teams has been bad (though it’s possible new kicker Kai Forbath’s 10-for-10 start is for real) and the defense has been atrocious. That’s not a recipe for a team with any real run in it, regardless of how great the offense is. Unless the defense has a miraculous turnaround, the kind of thing you’d think they’d have done by now if it was possible, the Redskins are probably on the outside looking in come playoff time. After 11 games, the team has improved over last season’s bottom of the league version, but despite the media hype about a Redskins run to the playoffs, Redskins fans will probably have to wait until next season.